Update on the City Manager Search 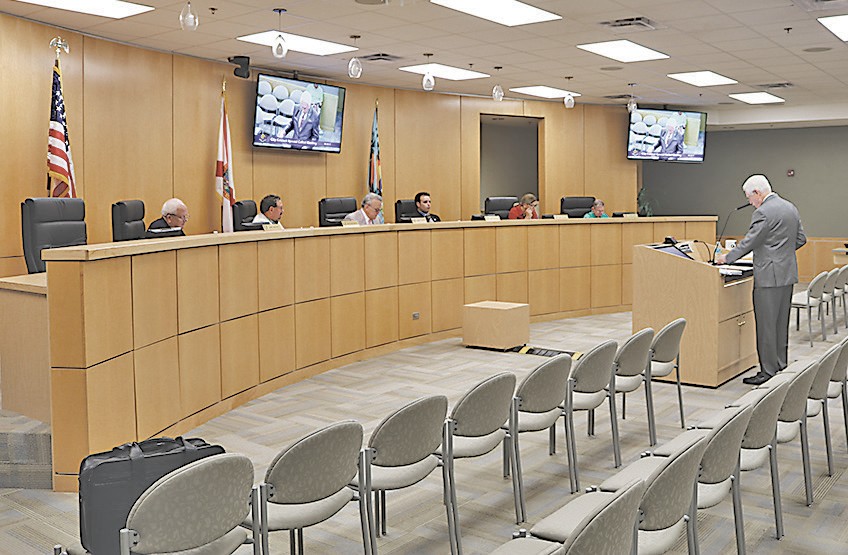 On Tuesday, June 20 in a special called meeting of the Marco Island City Council, the board heard from W.D. Higginbotham, Jr. of the Mercer Group, which has been contracted by the city to seek out compatible candidates to fill the existing city manager vacancy.

The Mercer Group provided an overview of the process, which included receiving 80-plus inquiries regarding the vacancy. In his presentation, Higginbotham reported that a number of those inquires usually are discarded for not meeting the minimum qualifications for the position.

Councilor Roman would provide a little comedic relief when she stated, “Half our island believes they are qualified to be city manager.”

Chairman Honig would inquire of Higginbotham: “Are any of these candidates you’ve presented indicating they are looking for a good place to retire?” Higginbotham would quickly respond, “Not on this list.”

After an overview of the process Higginbotham would move forward to review the top seven candidates of the nine he presented as “top tier” contenders.

Upon his completion of his presentation, Chairman Honig would turn the podium over to Vice Chair Grifoni, who would make a spreadsheet analysis of the candidates.

After completion of his presentation, Grifoni would immediately move to place Joshua Gruber into contention for a finalist position. Mr. Gruber is presently the Chief Legal Advisor to the Beaufort County Board of Commissioners, having assumed that position in 2011 and in September 2014 had the responsibilities as Assistant County Manager added to his resume after the former deputy county administrator, Bryan Hill vacated that position.

Prior to that from 2009 to 2011 he served as the Assistant County Attorney in Berkeley, North Carolina, which is north of Beaufort County, after closing his solepractitioner law office and entering into government service. An Ohio native, he was admitted to the South Carolina Bar Association in May of 2008 and was a 2007 law school graduate of Capital University Law School in Columbus, Ohio in 2007. He had previously studied for a political science degree from Clemson University and received a Master’s Degree from Georgia State.

Prior to council choosing the Mercer Group as a search firm, Vice Chairman Grifoni had requested permission to move forward to discuss the Marco Island position with Gruber, who had been earlier seeking the open city manager position in Fort Myers Beach. It would be councilors Roman and Brown that would agree that the open process be followed at that April 17th meeting when Mercer was hired, and council would agree to have any potential applicants submit resumes to the Mercer Group. “If there is any appearance that resumes are floating amongst councilors and being handled in a personal way rather than respecting the process, we will have demonstrated something less than our standards to be,” said Roman.

When assuming his expanded role in Beaufort County it was widely speculated in local publications that he was the heir apparent to the present County Manager Gary Kubic and this last year would have acted as a transitioning period as Kubic would bring his over decade long service in that position to a close. It was unclear what had changed if anything, but it was common knowledge Gruber had been a finalist for the Fort Myers Beach job back in Beaufort.

Council would vote 6-0 to invite him as a finalist. Councilman Batte was absent.

After inviting Gruber, Councilor Reed moved and Councilor Roman seconded his motion to enter the name of Garrison Brumback, who presently holds the position of City Manager in Southington, Connecticut for almost seven years as another candidate they would like to learn more about.

However, that nomination ran into objections from Council Chairman Honig. “I am going to tell you why I am reluctant to advancing this guy. He is a few years from retirement. He could be four years from retirement. So he is going to come down here and he’s going to retire. He is the guy I asked about at the beginning of the thing. He is going to want to find a nice Florida place; be paid 150 grand to live in a nice place, bring his Connecticut home money down here to buy a nice place and have a great time.”

After making those remarks, Honig followed on by saying, “I don’t mean any of this to demean the man, besmirch his character, nothing to do with that and I hope that is clear. I am just talking about the kind of man that I would like to see as the next city manager for Marco Island.” Honig added, “I would like to see someone that is here for a decade and not gone in four years.”

Brumback had served for seven years as the Assistant City Manager in Clearwater, Florida and was the only applicant to have Florida experience, which council had originally seen as an important attribute in seeking a new manager. He left Clearwater to accept the City Manager’s spot in Baytown, Texas on the Gulf Coast before moving on to Southington, Connecticut in 2010, where he has been for the last seven years.

During the intense storm years of 2004 and 2005 he headed the planning and preparations for Clearwater, and the recovery efforts regarding Hurricane Georges and Charley for the city.

Brumback did spend 20 years in the U.S. Army prior to retiring at the end of 1998 before assuming his position with the City of Clearwater, and left his final position as Battalion Commander at Fort Hood, Texas.

He holds a Master of Science in International Relations from Boston University, has a B.S. in Economics from the Virginia Military Institute, in addition to studies at the U.S. Army Command and General Staff College.

He has been a credentialed city manager with the ICMA since 2005.

The drawback some saw was that he was at the top of the advertised salary scale, however Higginbotham sought to assure councilors that he had discussed that issue, and due to the lower cost of living in Florida that was not going to be a problem, the applicant felt comfortable with a package more in line with some of council’s thoughts.

At the end of the discussions Council Chair Honig, Vice Chair Grifoni and Councilor Rios would vote no on continuing the dialogue with Mr. Brumback. Councilors Reed, Roman and Brown were in favor of extending an invitation to him.

Second Invite Made, But Withdraws

The only other invitation that was made after the marathon session on June 20th was to invite Tony Hamaday, who is presently the Township Manager, Marple Township in Broomall, Pennsylvania to come and be interviewed for the open position.

He has spent his entire career in the Pennsylvania area in various governmental positions since 1990 ranging from code enforcement to his present position.

This caused Councilor Brown to question the lack of experience regarding coastal community management and those special needs sets, as to whether it would be a proper match.

The board would vote 5-1 to invite him to join Joshua Gruber as the only other candidate. Gruber had received a 6-0 vote for a call back.

The next day Hamaday would decline the secondary interview. Moving Forward

Council does not meet again until July 17, and the intent was to bring in the two candidates for a meet and greet with the public on July 18 (at a location and time to be announced), and interviews and final decision at a special called meeting on Thursday, July 19, 2017.

As more information is obtained please check for updates at the Coastal Breeze News Website at www.coastalbreezenews.com for up to date information on this and other breaking island news. botomy schedule of once a week. Once his levels reached a normal stable range, the frequencies were cut back to once a month, eventually to once every four months.

Scientific research made the discovery of the HFE gene and its possible mutations in 1996. This has made the diagnosis of hemochromatosis so much easier. Liver biopsy is now rarely needed for diagnosis. DNA testing can be done as a blood test or as a simple mucosal swab from inside the mouth. I recently underwent DNA testing that revealed I inherited one copy of the C282Y mutation. This means that I am a “carrier” or heterozygote. Because I only have one copy of the mutation, I am considered to be at low risk for developing the disease. However, even a heterozygote should be closely monitored for signs of iron overload. Three specific blood tests called the Iron Panel can be used to evaluate and monitor those at risk for the disease. The serum ferritin test (SF) measures the amount of iron that is stored in the body. The panel also consists of the serum iron test (SI) and the total iron binding capacity test (TIBC). For those at risk of developing hemochromatosis, one of the best methods of prevention is to donate blood on a regular basis. Because the disease is an inherited genetic condition, it is not infectious and cannot be transmitted by way of a blood transfusion. Blood donation can actually serve as a therapeutic phlebotomy of prevention.

If there is a family history of the presence of the HFE genetic mutation or of full blown hemochromatosis, all biological family members should be tested. Once again, early detection and prevention are so important.

Marathon runner Aran Gordon has been nicknamed “The Man Who Turned Orange.” Beginning in 1984, Gordon ran a marathon each year for 15 years. In 1998, Gordon began to feel ill. His joints ached, he was chronically fatigued, and he became depressed. In spite of this, Gordon was determined to run the Marine Corps Marathon in 1999. He did so, but was barely able to finish. Eventually, his liver became distended, causing abdominal pain. His friends commented that his skin looked like it was turning orange. Gordon said he could feel that his body was dying. After years and a battery of tests, Gordon was finally diagnosed with hemochromatosis in 2001. He was told that if he did not begin a regimen of therapeutic phlebotomies, he would be dead in five years. For him, the treatments were indeed like primitive bloodletting, as he was left weak and anemic, even contracting pneumonia three times. But near the end of 2003, Aran Gordon said that his body literally “woke up.” In 2005, he triumphantly ran the Marathon Des Sables, a six-day 150 mile race in the Sahara Desert. He did so to raise money for the Iron Disorders Institute (IDI), a non-profit group dedicated to the education and awareness of iron related disorders.

I wish my dad could have been diagnosed sooner than he was, before the damage was done. Although his iron levels and liver enzymes were held stable for many years following his diagnosis, bloodwork in 2010 revealed that his serum iron levels were rising and the phlebotomies were scheduled more frequently. My father died from complications of Alzheimer’s disease at the age of 84 in 2014. There are documented cases of autopsy results showing the presence of high iron levels in the brains of some who have succumbed to the neurodegenerative diseases of Alzheimer’s, early onset Parkinson’s disease, epilepsy, multiple sclerosis and Huntington’s disease. I will always wonder of the how and why of my dad’s Alzheimer’s disease. I have my suspicions of hemochromatosis, this silent but iron-clad killer. No matter what, I will always remember my dad’s courageous struggle with both hemochromatosis and Alzheimer’s disease. Tom Murphy will always be my brave and fearless “Man of Iron.”