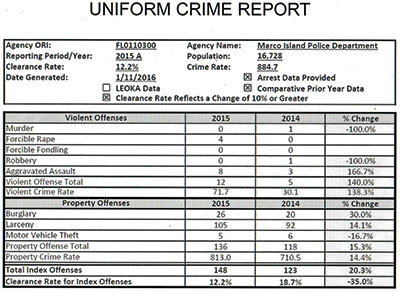 In 1929, the International Association of Chiefs of Police (IACP) initiated a program to enable the reliable reporting of uniform crime statistics in the United States. In 1930, the FBI assumed the responsibility of collecting, publishing, and archiving this data. Today, four annual publications, “Crime in the United States,” “National Incident-Based Reporting System,” “Law Enforcement Officers Killed and Assaulted,” and “Hate Crime Statistics” are produced from data received through the Uniform Crime Report program (UCR). Over 18,000 municipality, university/college, county, state, tribal and federal law enforcement agencies voluntarily participate in this program. The City of Marco Island Police Department is one such agency.

In examining a Uniform Crime Report, one needs to understand several important aspects. Offenses are distinguished between violent, or Part I offenses of murder, rape, fondling, robbery, and aggravated assault; and that of property offenses, which include burglary, larceny, and motor vehicle theft. In 1982, arson was added to the list of Part I offenses, and is prepared as a special statistical report in cooperation with the National Fire Data Center, the results of which must be made public.

When reading a UCR, it will be found that the number of offenses and number of arrests within one report generally will not match. The UCR collects statistics of all violent and property crime offenses that are brought to the attention of law enforcement agencies. Agencies can clear or close offenses by one of two means – by arrest or by exceptional means. Although a case may be closed without arrest, this does not necessarily mean that the offense can be cleared from being listed in the UCR. 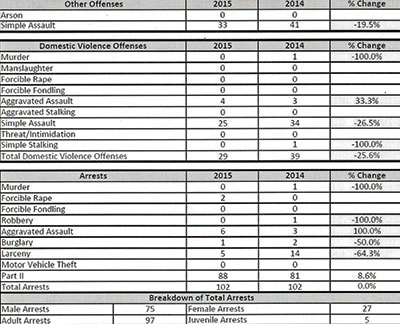 no matter how slight of the vagina or anus with any body part or object, or oral penetration by a sex organ of another person, without the consent of the victim.” The revised definition, in effect, includes both male and female victims and offenders. Although all agencies are advised to use the revised definition in their reporting, some are still using the legacy definition. For some agencies, the definition change has resulted in dramatic increases in the recorded statistics of rape offenses and arrests. For these reasons and because the change has only been in existence for a few years, the FBI is not yet showing data in the percentage change column of the UCR, but will do so in the future. Captain Dave Baer of the Marco Island Police Department states that the MIPD is using the revised definition of rape in their reporting.

Coastal Breeze News spoke with Captain Baer regarding the significance of the UCR program. Baer acknowledges that the UCR is a valuable tool, but cautions the public that the UCR is only one crime statistics metric. Analysts should not rely upon a conclusion based on the UCR alone.