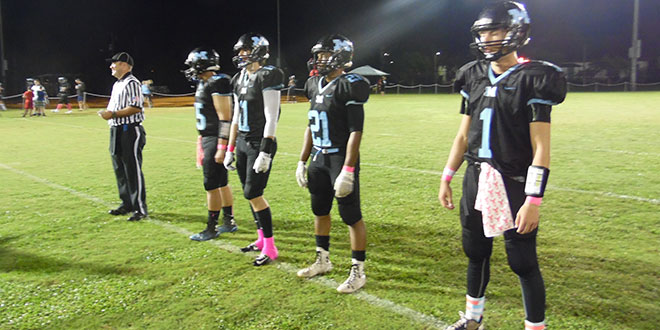 Kings players continually showed unsportsmanlike play on the field, with the encouragement of their coaches.

Hitting after the whistle had blown was common place for the Kings. The first quarter took one hour and six minutes due to game stoppage from confrontations and scoring drives.

One of the two Kings players was ejected twice. First for his 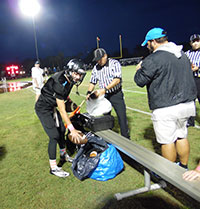 actions in the first quarter and the second coming when he came back onto the field during a fight when a teammate was ejected.

By policy the FHSAA does not give out names of those penalized.

MIA’s Tyler Gresham was also ejected and received a one-game suspension. Gresham came off the bench to pull MIA players away from the volatile situation. The FHSAA rules state that if a player leaves the bench and comes onto the field he is ejected.

When Mike Marciano, coach and Southwest Florida Christian athletic director, was called about the game, he

MIA starting players out for the season are Cayden Couture, broken clavicle and Miles Carlisle, fractured knee. Both were injured in previous game and could only be onlookers in MIA’s loss to Southwest Florida Christian on Friday, Oct. 16.

would not verify who was suspended. In a short, but heated conversation, he said, “You have ruined the school’s reputation with false comments” in the Breeze’s report of the game on its Facebook over the weekend.

The Kings also harassed MIA players, taunting them after making a tackle, or applauding in front of the downed player.

When a penalty was called Kings players often were heard saying, let us play football. Kings coaches on the sideline also gave referees a difficult time, indicating the calls shouldn’t have been made, urging players to continue what they 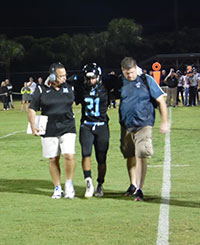 MIA’s team rushing leader Patrick Michel is helped off the field in the first quarter of Friday’s game. Michel injured his right ankle and was sidelined for the rest of the game. With him are coach Andrew Delgado, left and Florida Gulf Coast University trainer Jason Craddlock.

The FHSAA report on the player that was ejected twice said:

“At approximately 4:30 in the first quarter the athlete was ejected after standing over and striking a (player) of Marco Island Academy in the head with his fist twice. It should also be noted that athlete, after previously being ejected in the first quarter, left the confines of his team’s bench during a fight at the 7:45 mark in the fourth quarter. He ran across two-thirds of the field in order to participate in verbally assaulting and possibly instigating the opponent 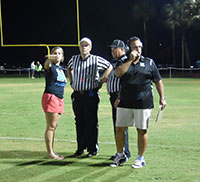 MIA Athletic Director Kelly Monnot explains why the score clock continued to malfunction during the team’s game against Southwest Florida Christian. With her are referees Ben Claas and Larry David and coach Andy Delgado.

into yet another fight.”

Rays player Bon Deese left the game after the first quarter incident with a possible concussion.

The FHSAA report on the second Kings player ejected said:

“After a punt that ended at the 7:45 mark of the fourth quarter, (Kings) athlete shoved an opponent with his hands to the ground and proceeded to strike the player on the ground with his hands.”

The player was Andrew Delgado who was not injured in the incident.

For Grisham the report said:

“Marco Island Academy athlete, a sub, left the confines of his team’s bench during a fight at the 7:45 mark of the fourth quarter.”