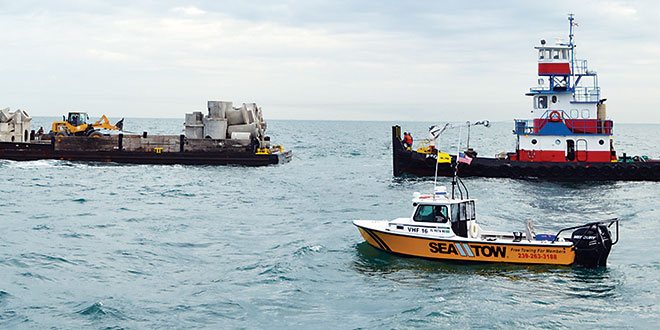 We circled the reef site while awaiting a thumbs up from the divers. PHOTOS BY MELINDA GRAY

The sky was overcast and the wind was blowing a cold snap our way in the early morning hours of Jan. 9 when I donned my jacket and gloves and joined the 120-person roster on board the Big Cat Express at Rose Marina in Marco Island. We lucky few would soon witness the ribbon cutting ceremony and deployment of the first cluster in Southwest Florida’s new artificial reef.

The official kick-off ceremony for the deployment was held Jan. 8 at the reef material staging site located on Collier Boulevard on the east side of the Jolley Bridge.

As we left the dock, I found myself surrounded by an impressive array of local dignitaries and a surprisingly large variety of press outlets.

A commendable job on a chilly morning, divers checked the seabottomwhile spectators gathered along the railing of Big Cat Express.

It was only then I realized the gravity of what was happening. When completed, this will be one of the largest artificial reefs in the western hemisphere with six football-field sized reef complexes in Gulf waters off of Naples, Marco Island and Collier County.

Ten miles off-shore, we reached our destination. Gearing up for the work to come and awaiting its well-deserved audience was a triple-deck tugboat painted a patriotic red, white and blue; several boats standing by for divers as they checked to assure optimal underwater conditions; and an enormous barge filled with 500 tons of concrete, just a fraction of the eventual 18,000 tons that will make up the reef.

Peter Flood, a Naples attorney and fisherman who spearheaded the project,

A front-end loader pushes the clean concrete into the Gulf at the reef site.

was on hand to deliver a short thank you speech, along with state Rep. Kathleen Passidomo, who spoke as well. Reverend Edward Gleason of Trinity-by-the-Cove Episcopal Church blessed the reef, and the much anticipated deployment commenced. For the next hour, we watched from our front-row seat as the large pieces of clean concrete were skillfully maneuvered by the front-end loader and dropped into the water.

According to Flood, the structures will begin to attract curious sea underwater creatures almost immediately after the day’s sea-bottom commotion ceases. The reef will provide local sea life with a source of food and shelter on an otherwise flat sandy bottom.

“We are extremely excited about this project. We really believe that it’s not only going to help

An impromptu meeting of the minds……

the local environment, but will also help the tourism,” said Katherine O’Hara, director of sales and marketing for the Marco Island Area Chamber of Commerce.

The $1.35 million project, funded almost wholly by BP oil spill grants ($1.3 million) is expected to contribute an annual $30 million to the area’s economy after only two years.

“We’re all about economic development, and this is a tourist destination; we have wonderful beaches and wonderful amenities. Now, we have an amenity below the water, and that is going to be so critical to our community because we have people coming from all over the world to dive here, to fish here, to enjoy our beaches and our restaurants and to enjoy everything we have to offer in Southwest Florida,” said Passidomo.