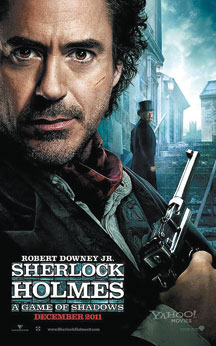 The latest movie version of “Sherlock Holmes” (“A Game of Shadows”) is decidedly not the Holmes we know and love from the much beloved A. Conan Doyle stories, or even the old Basil Rathbone films. The new Holmes is a macho gunslinger and hand-to-hand fighter. He’s just not very smart. His favorite violin has gone missing. So, too, is his finely tuned mind. He’s now more of a comic book version complete with massive explosions.

This time around, against a largely sepia background, Holmes (Robert Downey, Jr.) and sidekick Dr. Watson (Jude Law) more closely resemble Batman and Robin as they Pow! Zap! Zing! various bad guys. The great mystery of the movie is how so much action can, at the same time, be so boring. It’s also long, running more than two hours. As Holmes, Downey is more silly than cerebral. Watson is also a man of action rather than the calming doctor.

Director Guy Ritchie and the writers have stitched together a crazy-quilt of tidbits from several of Doyle’s stories, including a fairly brief appearance by Rachel McAdams as the luscious Mlle. Adler. She disappears early and is replaced by Noomi Rapace as a sort of sexy gypsy. Holmes and Watson track their way through various majestic European settings – from London to Switzerland – finally reaching the climax at the famous falls where Holmes and the evil Dr. Moriarty (Jared Harris) where the two had their notable set-to in the Conan Doyle version. When Holmes vanished in his “last” encounter, the British readers were irate, and Doyle had to revive his famous hero.

One of the finer touches in the film is including Holmes’ older, wiser, larger brother, Mycroft. He normally spends his time at the Diogenes Club in London, where he thinks great thoughts, and is available to Holmes whenever Sherlock is stuck on solving a particularly difficult problem. Stephen Fry is wonderfully cast as Mycroft, and adds a bit of sophistication and humor. Moriarty is also well played by Jared Harris. It’s too bad he doesn’t engage in a better exchange of wits other than a last minute chess match.

A good deal of the photography of Europe is beautiful. The remainder of the movie is not.