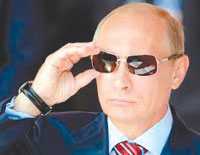 BEYOND THE COAST
Tarik Ayasu
tayasun@taray.com

Due to various obligations and travel, I was not going to send in an article to the next issue. However, after spending a sleepless night watching the ongoing events, I wanted to at least inform the readers as to what is going on in Ukraine, and what all this means for us in America.

As I write this article at 6 AM on Sunday, March 2, Russian troops are on the move into Ukraine.

On Friday, President Barack Obama promised “there will be costs” for Russia if the country moved on neighboring Ukraine — although no specifics were cited. In response, Senator John McCain of Arizona said, “It is now essential for the President to articulate exactly what those costs will be and to take steps urgently to impose them.

“Every moment that the United States and our allies fail to respond sends the signal to President (Vladimir) Putin that he can be even more ambitious and aggressive in his military intervention in the Ukraine.”

In the meantime, Russian President Putin declared, “I’m submitting a request for using the armed forces of the Russian Federation on the territory of Ukraine, pending the normalization of the sociopolitical situation in that country.” Furthermore, Russia’s upper house of parliament recommended that Moscow yank its ambassador from Washington over Obama’s Friday remarks.

During the past few weeks, Ukraine was rocked by pro-Russian protests in several cities, including Kharkiv, Donetsk, Luhansk and Odessa. In Kharkiv demonstrations left 97 people injured as the protesters forced Ukrainian government officials out of their headquarters — and raised the Russian flag above it.

In order to explain the situation in Ukraine, I posted a number of maps along with this article. The location of Ukraine is very important for Russia but much more important to Europe, the West and the USA! Ukraine is a finger pointed at the center of Western Europe, and could easily be the first step in Putin’s dream of re-establishing the Russian Empire by taking over the former Soviet Union territories lost after the end of the Cold War era. I urge the readers to look at these maps and orient themselves as to where Ukraine is and how important it is for the West not to lose this country back into Putin’s hands. 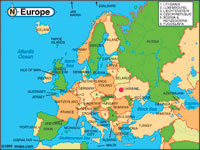 Nov. 21, 2013: President Viktor Yanukovych’s government announces that it is abandoning an agreement that would strengthen ties with the European Union and instead seeks closer cooperation with Moscow. Protesters take to the streets.

Dec. 17, 2013: Russian President Vladimir Putin announces that Moscow will buy $15 billion worth of Ukrainian government bonds and allow for a sharp cut in the price Ukrainians pay for Russian natural gas. Putin and Yanukovych claim there are no conditions attached.

Jan. 22, 2014: Two protesters die after being hit with live ammunition and the third after a fall during a confrontation between police and demonstrators manning barricades — the first protest deaths.

Jan. 28, 2014: The prime minister resigns and parliament repeals the new harsh anti-protest laws that set off the violence of a week earlier. Both are concessions to the opposition aimed at defusing the crisis.

Jan. 31, 2014: Opposition activist, Dmytro Bulatov, missing since Jan. 22, resurfaces badly bruised and with part of his right ear cut off. He believes a pro-Russia group was behind his kidnapping and torture, raising fears among the opposition that extrajudicial squads are being deployed to intimidate protesters.

Feb. 16, 2014: Opposition activists end their occupation of Kiev City Hall in exchange for the release of all 234 jailed protesters, in what is seen as a sign of progress toward resolving the crisis peacefully.

Feb. 18 2014: Street clashes leave at least 26 people, including 10 police officers, dead and hundreds injured. The violence begins when protesters attack police lines and set fires outside parliament after it stalls on taking up a constitutional reform to limit presidential powers. Russia’s offer the day before to resume payments under the bailout deal also feeds opposition suspicions that Yanukovych has made a deal with Moscow to stand firm against the protesters. Riot police respond to the violence by trying to push protesters off Independence Square.

Feb. 20, 2014: Hours after a truce is announced, fierce clashes erupt between protesters and police with numerous casualties. 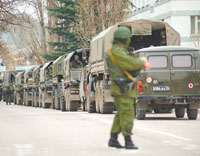 Russian troops on the march.

parliament and early elections to be held by December. The deal was brokered by the foreign ministers of France, Germany and Poland. Sporadic violence continues and in western Ukraine protesters occupying government buildings remain defiant, refusing to recognize the Kiev authorities.

Feb. 22, 2014: Protesters take control of presidential administration buildings without resistance and opposition leaders call for elections on May 25. President Yanukovych is nowhere to be seen and reports emerge that he has left for Kharkiv in the northeast. Parliament votes to remove him from power with elections set for May 25. Yanukovych appears on TV to insist he was lawfully-elected president and denounces a “coup d’état.” His arch-rival, opposition leader Yulia Tymoshenko, who was jailed for seven years in 2011, is freed and travels from Kharkiv to Kiev.

Feb. 28, 2014: Unidentified gunmen in combat uniforms appear outside Crimea’s main airports, sparking fears of Russian military intervention. At his first news conference since fleeing Ukraine, Yanukovych, now in Russia, insists he remains president and says he opposes any military intervention or division of Ukraine. Prospects for fielding single pro-EU candidate at May 25 presidential election take a knock when contender Vitaliy Klitschko says he has been told by Tymoshenko that she means to stand too. Ukraine’s central bank limits daily foreign currency cash withdrawals.

back to bases in Crimea. Putin says Moscow reserves the right to protect its interests and those of Russian speakers in Ukraine.

March 2, 2014: A convoy of hundreds of Russian troops heads towards the regional capital of Ukraine’s Crimea region — a day after Russia’s forces took over the strategic Black Sea peninsula without firing a shot.

And that brings us up-to-date.

My personal observations and predictions about the situation are very dim and dire.

1. Russia under Putin’s iron hand developed and increased production of their natural resources — namely natural gas and oil — and now holds many Eastern and Western European countries hostage to their oil and gas.

2. Using these resources, Putin was able to build up Russia’s economy and fill up the government’s coffers.

4. Sevastopol, Crimea (check the map), is where Russia has a very important naval facility and warm water port. Putin immediately took control of Crimea to make sure this port is secured.

About this point in the article, the readers will be wondering why what happens in Ukraine is important to us here in America.

Ask yourselves this question and you will connect the dots: “Would Putin engage in such an aggressive adventure if he worried about what America would respond with?” My answer is a bold “NO!” As the Russian adventure into Ukraine is in full force, our Secretary of Defense announced massive cuts to our defense budget and proposed to reduce the US military to pre-World War II levels!

A strong America means peace around the world. Our allies and enemies know by now that “lines” drawn by our leaders “not to be crossed without facing consequences” are nothing but totally meaningless, empty threats. Our adversaries are wringing their hands, slapping high-fives and smiling broadly as we unilaterally make these “knuckle-headed” moves to reduce our military might; cut payments and reduce benefits to those who sacrificed all for us; and diminish our powerful nation into just another country.

Can America do anything to change the course of events in Ukraine? The answer is a very sad “no.”

Wake up my fellow Americans before it is absolutely too late!