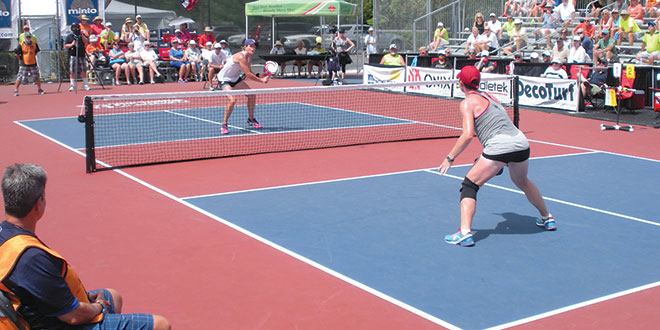 Irina Tereschenko, of Iowa City, prepares to return a shot by Sarah Ansboury of Portland, Ore. in their women’s singles semifinal match. Photo by Don Manley

It would seem that the inaugural U.S. Open Pickleball Championships (USOPC) could not have gone any better, based on the comments of organizers, participants, government officials, spectators and others.

Praise for the event, which drew over 800 top-echelon players from 39 states and seven foreign countries, along with 10,000 to 12,000 spectators to East Naples Community Park for the six-day-long event.

“Things went unbelievably,” said USOPC founder and President Terri Graham, who organized the event, along with fellow Collier County residents Chris Evon, and Jim and Carol Ludwig. “We went into this with the philosophy that we wanted to hit a home run for the first year and we came out of it having hit a grand slam.”

Graham said 2,000 to 2,500 people attended the tournament daily, exceeding projections, “10 times over, by far. We were thinking that if we had 1,200 people each day that would be good. We never imagined it would be so big this first year.” 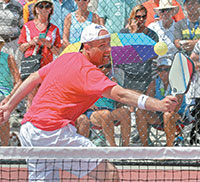 Matt Wright setting up a volley.

Visitors Bureau, said about one half of the spectators hailed from out of the area. They spent an estimated $2 million while here for the open and those funds generated another $1 million in spending as they circulated through the county’s economy, he added.

“The event exceeded our expectations in terms of the number of participants for a first-year event,” Wert added. “It also far exceeded our estimates of spectators and again, for a first time event it was really tremendous for our community.”

Many of those out-of-town pickleball enthusiasts occupied hotel rooms in the area, and flocked to local restaurants and shops.

“It’s done a lot for the economy, off-season,” said Mary Shea, area director of sales for Springhill Suites and Fairfield Inn and Suites, and president of the Sports Council of Collier County (SCCC). “The lights went out after Easter and now they’ve come. I’ve talked to several people who are looking to buy or rent here. It’s a sport that is a force to be reckoned with, that’s for sure.”

director sales and marketing for the open’s host hotel, GreenLinks Golf Villas at Lely Resort, said the event’s impact was unmistakable there.

“We have been full all week,” said Sullivan, who is a member of the SCCC and was an open volunteer. “We had over 100 players staying with us for the week. “They’ve come together from all parts of the country. I even have some re-bookings for next year. They haven’t even left yet and they’ve come up to the front desk and said, ‘Put us down for next year.’”

Pickleball is a blend of tennis, ping-pong and badminton, played badminton-sized court using a solid paddle and a plastic, perforated ball that resembles a waffle ball. Play can involve two, three or four players, who send the ball over a 3-foot-high net to the opponent.

Invented in 1965 in the Pacific Northwest, the sport has become a popular form of recreation in Southwest Florida, especially among the 50-and-above crowd, and it’s considered to be America’s fastest growing sport. The USA Pickleball Association estimates 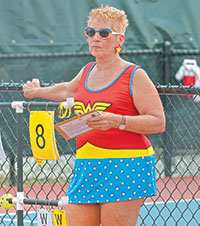 that there are 150,000 people who play regularly in this country.

East Naples Community Park’s pickleball facilities were been upgraded to meet professional standards for the open, and the number of courts expanded from 32 to 46, including the special Zing Zang Championship Court, which sat more than 700 spectators. The improvements were funded by Collier County, including a donation of $20,000 from the event’s main sponsor, Minto Communities Florida, the developer of the Isles of Collier Preserve community, located next door to the park.

Aside from the day-long slate of matches, the open also included parties, charitable fundraising activities and a kids’ day to introduce youngsters to the sport, hands-on. There was also a U.S. Open Village with food, beverages, live music and a beer garden where libations could be had. There was a U.S. Open Expo tent filled pickleball merchandise vendors.

The event was also history making in the pickleball world.

USA Pickleball Association’s annual national tournament, held in Arizona, had been the world’s largest, until now. “We have beat their numbers by over 100 participants,” he said.

The open also marked the first time the sport was covered by a major television network for a national broadcast. CBS Sports had cameras and announcers there for its entirety, taping the proceedings for future broadcast. The network, which has a three-year contract to cover the open, will broadcast the event’s finals on May 20. A broadcast time was not available at press time.

“It’s never been on a national broadcast,” said Ray Colaiacovo, a senior producer for West Palm Beach-based Digital Wave Productions, which covered the open for CBS Sports. “It’s never been covered at this level before, with a truck, the way we normally cover conventional ‘ball’ sports. When they look back on this, 10 or 15 years from now, to see the original national broadcast of pickleball, they’ll look back on this broadcast.”

The open was also covered by the Pickleball Channel, which provides

The crowd cheers the action on the Zing Zang Championship Court. Photo by Don Manley

Organizers and volunteers praised the Collier County commissioners and the county’s parks and recreation department for playing an integral role in making the open happen and making it a success.

Commissioner Donna Fiala, whose district includes East Naples, was a presence at the matches throughout the week and she was thrilled with the final result of about one year’s worth of planning.

“I think it’s going to put us on the map as the pickleball capitol,” she said. “People were so impressed with our courts, with the planning and how smoothly everything went. I just feel so blessed that I was able to be part of bringing this wonderful event to our community.”

She and Ludwig said they anticipate an even bigger open in 2017, with more players and spectators as word spreads throughout the pickleball community.

“I believe that I am speaking for everybody that was involved, it was an overwhelming success,” said Fiala. “The good thing is, we’re already planning next year. That means it will give a lot more people a reason to be excited about having it.”