Two MIHS Speakers Not to Miss 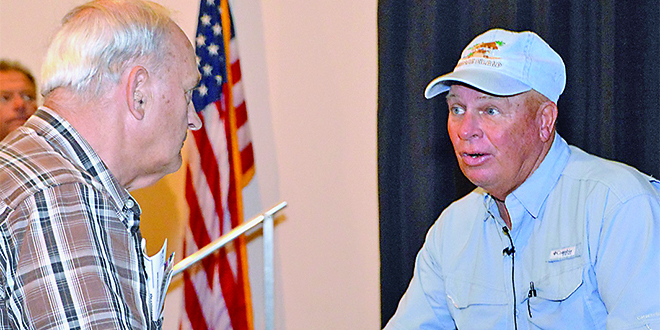 Submitted Photos |Robert McConville speaks to an audience member at a recent lecture.

Top off a day of sun and sand with a Marco Island Historical Society lecture at Rose History Auditorium. The lectures, which start at 7 PM, are free to members of the Society and $10 for nonmembers.

An avid photographer, McConville has recently released his first book “Beyond the Mangrove Trees,” which is filled with photos of his wildlife encounters. A book signing will immediately follow his lecture.

McConville is the founder of Stepping Stone Ecotours, an organization made up of environmental scientists who take visitors on boardwalk tours of the Big Cypress National Preserve. He is also a naturalist aboard the Dolphin Express out of Marco.

February 28: The Great Escape
Award-winning writer and internationally acclaimed lecturer Robert Macomber tells the riveting tale of Confederate Secretary of State Judah P. Benjamin, who escaped to freedom at the end of the Civil War through Southwest Florida. His journey proved a dangerous one, involving liaisons with Confederate sympathizers and intricate disguises, all to avoid encounters with Union soldiers.

Macomber is best known for his historical thrillers, known as the Honor Series, which follow the life and career of a naval officer starting with the Civil War through the early 20th century when the United States becomes a global power. There will be time for a question and answer period plus a book signing following his presentation.

Rose History Auditorium is located at 180 S. Heathwood Drive, across from the library. For information call 239-642-1440 or visit themihs.com.