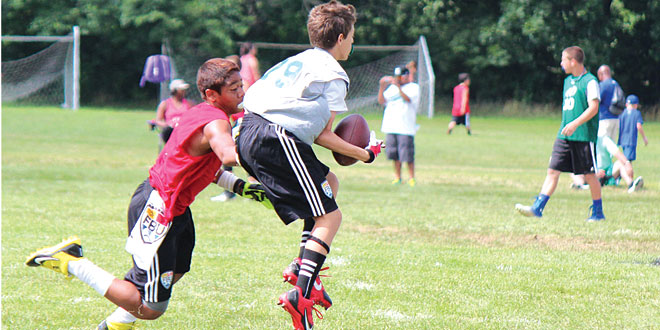 Last week two local football players had the chance to compete for a spot on the “Eastbay Youth All American Bowl” football team at the Football University Top Gun camp that was held in Dublin, OH. The camp is by invitation only to the top seven hundred fifty 6th, 7th and 8th graders in the nation according to the FBU website. Cody Webb and former teammate Zach West both were invited and made the journey to Ohio to see if they had what it took to get picked for the youth bowl game that is played in the Alamo Dome in San Antonio, TX each 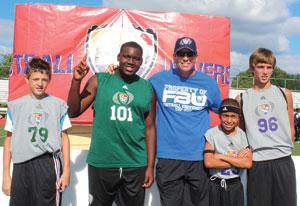 Zach and Cody were up against some of the best youth talent in the nation and Canada, including one representative from Hawaii for a spot as a receiver. The coaching staff for both players represented some of the best past NFL players and coaches and with 2 on field sessions and 2 class room seasons each day they were instructed on what they need to do and correct to be a better football player. Some of the coaches included Stacy Bailey, Wes Chandler, Norm Anderson, Charlie Collins, Billy “White Shoes” Johnson, Nate Poole and many others. 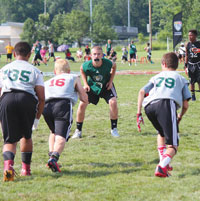 Cody Webb #79 waiting for the snap to make his move.

for youth football along with getting to hear several key note speakers and meeting other players from across the nation. The FBU Top Gun experience was, for both players, one that they will remember for the rest of their lives thanks to their moms and dads making it possible for them to attend the event. While neither player was picked for the team at the end of the camp the football season starts again soon for both, with Zach playing for the MICMS team and Cody looking at playing for either the SWFYFL Golden Gate Tigers or the South Naples Pirates along with playing golf for the MICMS golf team.