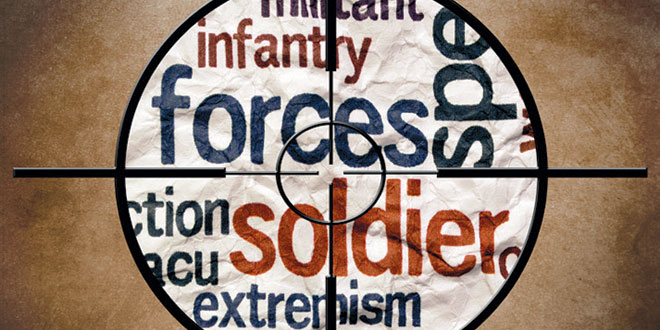 Everywhere on social media you see posts of members of our military coming home to a wife, a husband, parents, children or pets. We witness tears of joy. You can sense their overwhelming happiness to be reunited with those they love. Each instance tugs at my heartstrings. I can’t imagine how that feels. I am always amazed that the camera can bring me to tears. Tears of joy and gratitude. My gratitude for our military is overwhelming at times, especially when witnessing these not so private moments.

If asked why I’m crying and laughing at the same time, I literally have to choke down a sob and hand my phone over since I can’t seem to say anything aloud, it’s just unimaginable to me.

Recently I came across a post from a friend who is doing 22 push-ups per day. That was it, no more, no less. As a fitness instructor, I wondered why that exact number every day? I learned that it was in recognition of our soldiers and their sacrifice defending our great nation, who come home with Post Traumatic Stress Disorder. Apparently many of our soldiers commit suicide every year after returning and suffer from PTSD, this terrible mental illness. It was reported by the Veteran’s Administration (VA) the estimated number of veteran suicides was 22 per day. My first thought was, “Isn’t there anything we can do?”

Like so many others in the country, my father and uncle were in WWII, my brother-in-law in Vietnam.

My uncle used to visit my family all the time, he took me on walks, took time to chat with me about really important things like second grade math and social studies. He taught me how to paint a birdbath and even some of the many ways to irritate my mother. To me, he was my best friend. To my family, he was troubled. He was one of a few that survived Normandy. Needless to say, it did a number on his mental state. I seem to remember only seeing him until about six every evening.

It wasn’t until many years later that I was told he suffered from this same mental illness.

Doing a little research on this #22kill and #22pushups as it’s called, I found this is a real challenge. FOX published an article about it. The VA has written about it. Others have written about it. Since the popularity of the challenge took off, questions have been raised regarding the number of suicides. Seriously? Does it matter? One is one too many!

Here’s how the #22pushup Challenge works: Every day you do 22 push-ups and you challenge someone to do it also. That’s it! This wasn’t hard for me, since I love push-ups (ask anyone who takes my classes, or that I train). Push-ups are my favorite! Since I began this challenge, I’ve done standard push-ups, declined push-ups, and even push-ups in the dark. You can find a video of my challenge on Facebook.

It’s all just to promote awareness. To send a message that we care and we are thinking of our soldiers that fight for our freedom, every single day.

From the Department of Veterans Affairs:

The (VA) announced new steps it is taking to reduce Veteran suicide. The steps follow a February 2nd Summit, “Preventing Veteran Suicide – A Call to Action,” that brought together stakeholders and leaders to discuss current research, approaches and best practices to address this important subject. “We know that every day, approximately 22 Veterans take their lives and that is too many,” said VA Under Secretary for Health, Dr. David Shulkin.

“We take this issue seriously. While no one knows the subject of Veteran suicide better than VA, we also realize that caring for our Veterans is a shared responsibility. We all have an obligation to help Veterans suffering from the invisible wounds of military service that lead them to think suicide is their only option. We must and will do more, and this Summit, coupled with recent announcements about improvements to enhance and accelerate progress at the Veterans Crisis Line, shows that our work and commitment must continue.”

Several changes and initiatives are being announced that strengthen VA’s approach to Suicide Prevention. They include:

• Meeting urgent mental health needs by providing Veterans with the goal of same-day evaluations and access by the end of calendar year 2016;

• Establishing a new standard of care by using measures of Veteran-reported symptoms to tailor mental health treatments to individual needs;

• Launching a new study, “Coming Home from Afghanistan and Iraq,” to look at the impact of deployment and combat as it relates to suicide, mental health and well-being;

• Using data on suicide attempts and overdoses for surveillance to guide strategies to prevent suicide; Increasing the availability of naloxone rescue kits throughout VA to prevent deaths from opioid overdoses;

• Continuing to partner with the Department of Defense on suicide prevention and other efforts for a seamless transition from military service to civilian life.