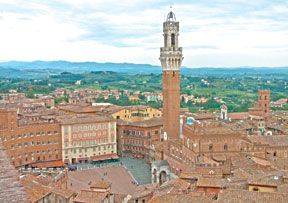 The Piazzo del Campo is the center of activity in Siena.

While Florence is the big city draw in Tuscany, its ancient rival, Siena, is a favorite of ours. Florence has the art; Siena the charm.

Once as great and strong as Florence and fierce adversaries, the Black Death in the 1300’s destroyed a third of the population of Siena and caused irreparable economic harm. In the 1500’s, the final defeat by the Florentines resulted in the cessation of further building. If you are a history buff, that between these two competitors is a fascinating read.

Siena is built on three hills; the clay in these hills contains a pigment which when burned results in the color known as “burnt sienna”….remember that reddish brown crayon from your Crayola set when you were a kid?

We spent a month on a vineyard once and traveled to Siena frequently for shopping, sight seeing, sometimes just for lunch. Recently we had the opportunity to return and revisit our favorite restaurant from years ago. It was still there and still serving good food.

The jewel of Siena is its sloped, red, shell shaped Piazza del Campo, or “il Campo.” If you visit, you will find yourself drawn to it over and over, no matter how short your stay. 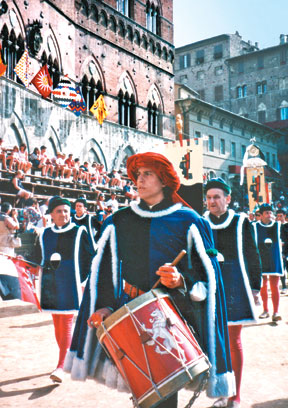 Pageantry in the form of costumed parades lead up to the Palio in the Siena.

some with balconies overlooking the piazza. Towering above is the Torre del Mangia dating from the 14th century and adjacent Palazzo Pubblico, the town hall and civic museum filled with Sienese art. There are 332 steps to the top for a panoramic view of the city. If climbing 332 steps is not on your list of things to do, read on for another view option. Radiating up from il Campo are streets and alleys lined with medieval buildings. The main streets of Via Banchi di Sopra, Via Banchi di Sotto, and via di Citta are the primary shopping venues. Here you find the very popular Tuscan wild boar, cinghale; some of the shops use the heads as decoration.

The second big draw in Siena is the cathedral with its zebra striped tower. As ornate as its exterior is, the interior is the real treasure with striped columns and an inlaid marble mosaic floor. Sections of the floor are often covered for protection, but there is always something on view. The art includes works by Michelangelo, Donatello, and Bernini; the Baptistery has a font by Donatello, Ghiberti, and della Quercia. 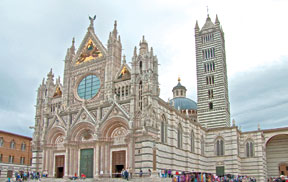 The Cathedral (Duomo) of Siena is a sight to behold. PHOTOS BY VICKIE KELBER/COASTAL BREEZE NEWS

is not as dramatic as the Torre del Mangia, it is every bit as enchanting. The Crypt below the Duomo opened to the public in 2003 is resplendent with 13th century frescos. There is a combo ticket available that provides about a ten dollar savings if you want to visit all of these.

Between il Campo and the Cathedral is Palazo Chigi-Saracini, 14th century palace that is now home to a world class music academy; step into the peaceful courtyard where there are frequent and often impromptu concerts.

Santa Maria della Scala, once a hospital, is now a museum and the nearby Pinacoteca Nazionale features Sienese art from the 12th to 17th centuries.

A second frequented religious edifice is the Church of San Domenico. It is rather simple by Italian standards, is dedicated to St. Catherine and includes a reliquary containing her head. Nearby is also the Sanctuary of St. Catherine which has attracted pilgrims since the 1400’s.

Siena also has a wine museum and tasting cellar, the Enoteca Italiana housed in the Medici Fortress of Santa Barbara.

Twice a year, in July and August, the Palio di Siena, or simply, il Palio, with origins to the Middle Ages, takes place on il Campo. Siena is divided in 17 districts, or contrade. Each neighborhood is represented by a color 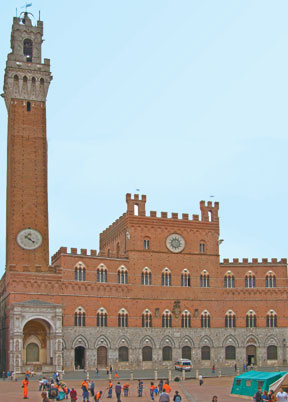 The Palazoo Pubblico with its Torre del Mangia adorns the Piazza del Campo.

and an animal. Ceramic plaques and banners attached to buildings proudly identify each contrade. Il Palio is a boisterous time; the rivalry among contrades unparalleled.

The oldest record of a Palio is from 1283, but it may predate that. The Palio is actually the prize; a hand painted silk banner. There is space for only ten horses, so those representing ten contrade are chosen by draw, although the seven that didn’t compete the prior year are automatically included. The horses are provided by private owners and which horse will run for which contrade is by lottery.

The bareback race is short, only about a minute and a half. Prior to the race, the horses are brought to a chapel for blessing; if “manure” is dropped, it is considered good luck. There are no rules against bribes, ambushing jockeys or even doping. It is not unusual for jockeys to be thrown on the earthen covered stones during the race. Interestingly, the horse considered the loser is the one who comes in second, not the last one. A race within a race is that each contrade has a rival and part of the “game” is to try to get one’s rival to lose.

We once visited during Palio season. While we were unable to obtain tickets for the 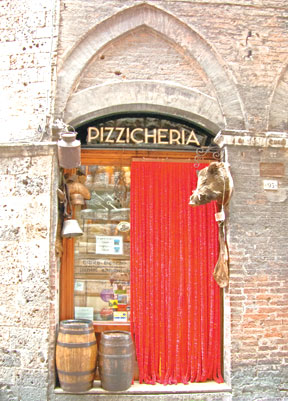 The popular cinghale, wild boar, is available in many shops in Siena.

event itself, we were able to view the parades with their medieval costumes featuring flag throwers leading up to it as well as one of the trial races. Bleachers were set up on the outside of the race course, but il Campo itself was packed with people….“chock-a-block” as the Brits say, and very, very scary.

The shouting, jeering, singing and even some fighting, was every bit as enthusiastic as during the real race. It was no problem that we missed the actual race as one Italian television station replayed it, over and over, 24 hours straight for days and days after.

Siena is 35 miles south of Florence. There are daily trains, but a better option from Florence is to take a bus; bus travel is faster and the schedule more frequent. No cars are permitted within the historical center, but car parks are located near each entrance to the city.