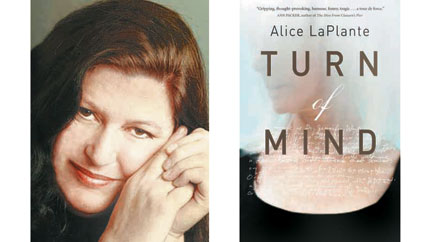 If you are a regular reader of Book Remarks you probably have noticed that you often don’t know what the book I am reviewing is about until close to the end of the column. I tend to chat a bit about various other things first. In this case I will tell you right up front this book is told through the eyes of Dr. Jennifer White, an orthopedic surgeon, who, at the age of 64, has dementia, the intermediate stage of Alzheimer’s disease. Her best friend has been found dead with four of her fingers removed, it would appear, surgically. It would seem obvious that the police consider her, as we often hear the term, “a person of interest.”

To me the mystery detailed in this book was fairly well done. The big question to me was, if she did indeed do it, why, and to a lesser degree, how? But the overwhelming reason I found the book fascinating is that my mother died at the age of 74 of Alzheimer’s. This book is written through the eyes of the patient. And that was something I found deeply personal and interesting.

Our family had no idea there was anything going on in my mother’s mind until one day, while we were on vacation diving in the Florida Keys, she asked me how much instant coffee she should use in making my father a cup of coffee. An innocent enough question, unless you knew that she had probably made him a cup of instant coffee several times a day ever since it had come on the market. A giant question mark loomed in my mind and I asked my father if he had noticed anything different about her lately. He said he had noticed, upon reflection, that she had become more forgetful.

At that time, she was the window designer for a women’s dress shop in Ft. Myers, so we asked them if they had noticed any changes in her and indeed, they had, but had not mentioned it out of kindness since she had worked there for twenty years. We immediately made an appointment with a neurologist where she was diagnosed with Alzheimer’s. (There is no firm diagnosis of the disease without an autopsy. However, the signs of the disease are usually fairly definitive. I had not heard of the disease before then and, in fact, I believe the public in general was just becoming aware of Alzheimer’s at the same time as our family, in 1977.)

From that day until the day she died, we saw the person we had known leave us, bit by bit, until there was nothing left but her familiar, beloved face and body. She went from a person whom I had never seen cry to someone who cried often, someone gentle and kind to someone who would hit others. She had always taken great pride in her dress, hair and makeup but lost interest in her appearance, even to the point of not caring whether her false teeth were in her mouth. Eventually, she no longer recognized her family. (The first time I visited her in the nursing home and she didn’t know me was a heart breaking day, as you can imagine.) She even forgot how to talk. The last words she remembered how to say though were a testament of the person she had been before her illness. Those few words, said to anyone who stopped to give her even a moment of time were, “I love you.”

If this total change in the woman we knew and loved frustrated and baffled all of us, can you imagine how it must have felt to be her? We never told her she had dementia because we didn’t think there was any point since she would forget a minute later. We took care of her at home until it was unsafe for us to do so. The chances of her getting lost if she were more than ten feet from the house, the chances of her doing harm to herself from taking the wrong medicine or burning the house down from leaving a pot on the stove became too great. In all that time I had a sense of her bewilderment and fear. Her whole world was upside down. It seemed as though she must have felt like Alice in Wonderland. I often asked myself how she must feel and by reading Turn of Mind I was given a pretty clear idea of what might have been going through her head.

If you have had a chance to interact with a friend or family member with dementia you will find answers to many unasked questions. At least, I know I did. Yes, the mystery adds to the interest of the book, but the true interest, to me at least, was seeing this dreadful, soul robbing disease through the eyes of the person living with a version of Hell each and every day until, at last, I imagine, it all becomes just a blur.