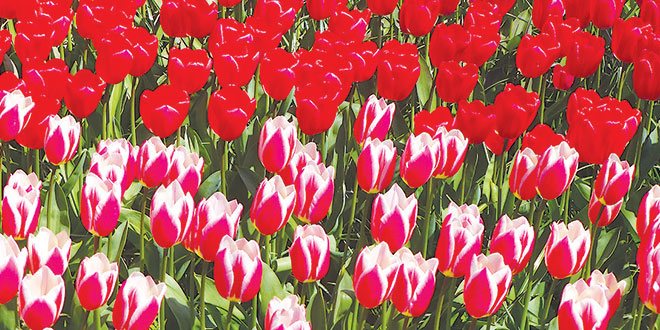 One of the best times to visit Holland is when the flowers, for which it is known, are in their full splendor, on display at Keukenhof Gardens, from mid-March through mid-May.

Although people often use the terms “Holland” and “the Netherlands” interchangeably, Holland refers to only two of the twelve provinces that comprise the country of the Netherlands. North and South Holland are home to the Netherlands’ major cities of Amsterdam, Rotterdam, The Hague and other popular destinations such as Leiden, Delft, and Haarlem.

Tulips are not native to Holland; they were imported from the Ottoman Empire (Turkey) in the sixteenth century. Their popularity led to a period of “Tulip Mania” in the following century, and what was one of the first economic bubbles in recorded history. Until the market collapsed, their price increased to the point of one highly prized bulb being worth as much as a canal house in Amsterdam or 12 acres of land.

Keukenhof Gardens, located in Lisse between Leiden and Haarlem about 30 miles southwest of Amsterdam, features a display of more than seven million flowers from the major Dutch growers. There are some 800 varieties of tulips, along with a multitude of other blooming bulbs including daffodils, narcissi, hyacinths, bluebells, crocuses, lilies, and amaryllis. Azaleas and rhododendrons add to the profusion of color. Hosting more than half a million visitors during its nine-week season, on the grounds of what was the estate of a countess in the fifteenth century, there are indoor pavilions, a windmill, ponds with swans, 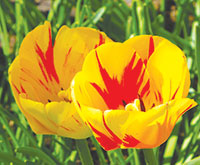 ducks, and water spouts, and about 3,000 trees that provide shade along the nine miles of pathways. Artists are invited to display their sculptures throughout the garden; many of the pieces are available for purchase.

The varying species and luxurious colors of the blooms, not to mention their fragrance, can be dizzying. It’s difficult to pick a favorite, but I think mine are the parrot tulips, with their frilly, feathery, multi-hued petals. Keukenhof has a theme each year. This year’s was Van Gogh and included a flower mosaic self portrait of him, made of thousands of tulips.

A free guided tour is offered once a day. There is a 45 minute “whisper” boat trip that traverses the area’s canals. So named because of its quiet electric motor, it leaves from a dock behind the windmill. It is relaxing, but not optimal for taking photos or even viewing, as one’s level of sight is below the blooms. For a more unique experience, there are flying tours over the gardens and surrounding flower fields in a classic DC-3 plane.

Visitors can fortify themselves as needed in one of the five restaurants and other food stalls, which offer such Dutch delights as waffles, herring, and smoked hot dogs, as well as those wonderful pofferties, mini pancakes. Yes, there is shopping; sixteen shops feature goods such as cheese, bulbs, Delft ceramics, and other traditional Dutch souvenirs. There is WIFI in Keukenhof, so visitors can send instant picture postcards. There are lockers for those who bring backpacks but don’t wish to 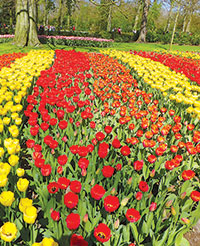 Some of the more than 800 varieties of tulips at Keukenhof Gardens.

carry them. Wheelchairs are available free of charge and scooters can be rented for a very reasonable fee. Both require a deposit and can be reserved ahead of time.

Bus transportation to Keukenhof is available from Leiden, Schipol Airport, or The Hague. Purchase of an all-in-one ticket for transport and entry prevents having to queue up at the garden’s ticket booth. From Amsterdam, via Leiden, it takes a bit less than an hour and a half. The most popular option from Amsterdam is to take the quick train from the city to the airport and then Bus 58 to the gardens. The combination bus/entry tickets can be purchased at the VVV Amsterdam tourist information offices. At the airport, Bus 58 leaves from the second island outside the arrivals level entrance.

To see tulips in their natural growing stage, visit the 10 mile-long, 4 mile-wide Boolenstreek region. Bikes can be rented outside of Keukenhof for a ride through the fields; maps are included with the rental. For those driving, there is a 37 mile signposted Bolenstreek Route. Along the way, roadside stands sell bouquets and garlands that many people use to decorate their cars. I’ve taken a train whose path traversed the growing fields, and it was amazing. The neat swaths of red, pink, purple, orange, white, and yellow, as far as the eye could see, as the train chugged along, were mesmerizing.

A visit to Aalsmeer, the world’s largest flower auction, can complete the Dutch flower experience. In what may be the largest single roofed building 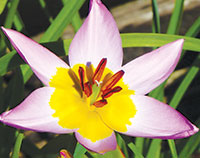 One of the more exotic tulips in Holland.

in the world, the size of 50 football fields, more than twenty million plants and flowers are sold daily. Although the rise of internet bidding and increased growing markets in other parts of the world have affected some of the activity at Aalsmeer, more than half of the world’s cut flowers are sold through this auction. A large clock counts down from a high price per stem until it reaches a lower price at which an interested buyer presses a button to lock in his/her purchase price. A raised platform gallery allows visitors to observe all the activity below, including workers biking from one end of the huge structure to the other, and trucks and carts whizzing by to deliver flowers.

There are information points along the gallery (tulip shaped, of course), with explanations in four languages including English. Known as the VBA (Verengde Bloemenveillingen Aalsmeer), the auction is open weekday mornings from 7:00 AM to 11:00 AM (9:00 AM on Thursdays). Mondays are the busiest, Thursdays, the quietest and early arrival (by 8:00 AM) is essential. Located near Schipol Airport, Bus 198 from there takes about twenty minutes. From Amsterdam, Connexxion Bus 172 from Centraal Station takes just under an hour.

It’s not too early to think about and plan a trip to Holland for next year’s tulip season. Tours, cruises, hotels, and apartments during prime viewing season can fill quickly. Selecting a date to go can be tricky. Too early in a cold year, and the flowers will not have fully blossomed yet. 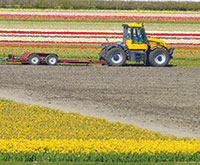 Among the tulip fields of Holland.

Too late in a warm year, and the height of the blooming season may be over. The unconfirmed dates for next year are March 24 to May 22, 2016. Remember that Easter will be March 27 next year and April 27 is King’s Day, a national holiday in the Netherlands.

Mid-April seems to be a popular time to visit. The only drawback to tulip season in the Netherlands is that the weather can be somewhat chilly and rainy. We spent a week there once in spring flowering time and never took off our raincoats. We missed the opportunity to sit and relax in sidewalk cafes, but the sight of the magnificent blooms was more than compensation.

If you happen to be there April 23, 2016 (unconfirmed date), there will be a flower parade from Noodwijk to Haarlem which passes by Keukenhof in the afternoon. Visitors are allowed to leave the gardens to watch the parade and then return. Even if you are there the day before or after, look for special events revolving around the season.

My thanks to Art Manburg for sharing his beautiful photos from his and wife Delores’ recent visit to Keukenhof.