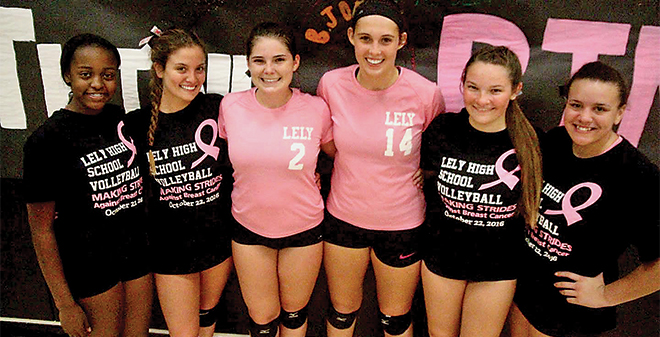 It’s true that the Lely volleyball team lost in three games to Community School of Naples on October 13 at the Trojans’ gym. But the ladies of Lely High still came away winners as they raised money for the American Cancer Society’s Making Strides Against Breast Cancer campaign in their annual Think Pink event.

This year’s Think Pink match didn’t show up on the schedule, but some maneuvering by head coach Christina Haire—and cooperation by Community School—made the fundraiser a reality.

“This was our last home game,” Haire said, “it wasn’t on the schedule. We didn’t think we were going to have a breast cancer event this 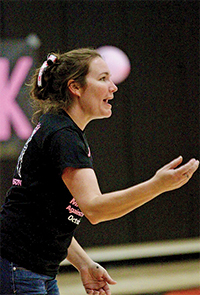 year, just due to the scheduling. We were glad that we were able to have this event. We were really happy to hear from Community School when they emailed a couple of weeks ago saying they were able to move their schedule around and do it for us.”

For the record, Lely was on the short end of 25-18, 25-9 and 25-18 scores in the non-district match-up. But it was the cause that was most important on this occasion. Lely finished the regular season with a perfect 6-0 district record.

“All of our proceeds from tonight, from the door entries to concessions, to t-shirt sales, is all going to 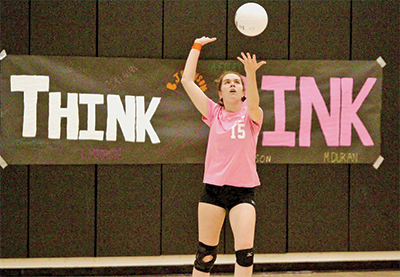 the American Cancer Society,” Haire said. “We’re walking in the Making Strides Against Breast Cancer event on October 22. We have a colleague from Lely who passed away from breast cancer a couple of years ago—the mother of Alyssa Johnson, a former player here. She was a great person, so we really do try to remember her quite a bit.”

The annual fundraiser means a lot to the players.

“Breast cancer has touched a lot of the girls in every family,” Haire said, “so it means something to each of them.  They’ve all had a family member, teammate or parent who has suffered with breast cancer. So it means a lot to them.”