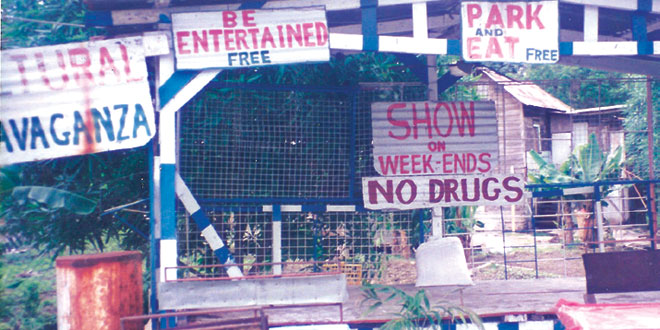 Ah, Trinidad! We spent over five weeks there from May 17 until June 25, when we left Chacachacare Island, which was formerly a Leper Colony (yes it is spelled correctly). We sailed to the north coast of Venezuela, South America. All of the Caribbean Islands have a unique charm and beauty about them. However, we could not think of one that we seriously imagined living long term, say for a year or so, until we visited Trinidad. No, it was not the most beautiful. No, it does not have miles and miles of white sandy beaches. No, it does not have turquoise clear water. So what does it have?

Trinidad has an undefinable quality which we, as well as many other cruisers, enjoyed. The people of Trinidad were very gracious, helpful when needed and made a genuine effort to include the cruisers in their daily life and culture. One of the more colorful fellows that we met there was Mervin, the upholsterer. He was a Rasta man complete with dreadlocks. I thought it rather funny and most insightful when I paid him for his canvas work in Trinidad/Tobago dollars. He just slipped it into his pocket. Smiling, I reminded him to be careful walking in town with all that money. He laughed and said that he did not need to worry and said, “I look like the one that be doin’ the robbin’!”

Most goods and services are available at a most attractive price. Getting around Port of Spain and 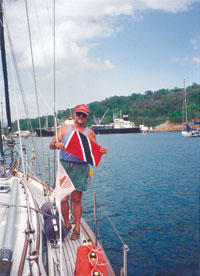 Herman with the Trinidad Flag.

its environs was most convenient and very inexpensive. There were four ways to get around and all were right outside the entrance to the boat yards, the yacht club, and Trinidad, Tobago Yacht Association. Either we took a maxi van, a bus, group taxi, or private cab. Phones and ATT operator services were readily available. There was a social group activity or cultural event scheduled at least once a week or more which we would attend. Sometimes, the event planner would send a bus to the various boat yards at least once a week or more to pick us up.

Some of the events included: pan concerts, horse racing, World Cup Soccer matches, musical concerts at Queens College, jazz concerts, BBQ’s at Trinidad Tobago Yacht Association or Queen’s Hall. Also, you could take tours of the island or go on a turtle watch. There was always a social group activity or cultural event scheduled at least once a week.

During the week, vendors made life aboard your boat convenient. The vegetable truck and various other vendors came to the boat yards. Some were: the shrimp man, the French bread man, a man selling New York style bagels, fresh home grown fruits and vegetables and others with their very welcomed fare.

All vendors did not sell fruits and veggies, per se. Some sold the ever present local fare, including Trinidad logo baseball caps, t-shirts and other engraved fare. Chin’s laundry service even delivered. 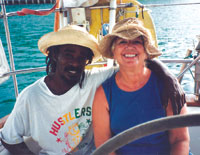 Helper and Trini friend Mervyn and me. PHOTOS BY FRAN DIEBLER

talk and exchange sea stories with other yachties. We often learned something new as well.

Before leaving this most interesting island, we visited Peter Minchell’s studio. He is the man responsible for the fantastic costumes used for Carnival. Because of this, he was hired to create the costumes used for that year’s opening and closing ceremonies for the Olympics to be held in Atlanta, Georgia. We were given a sneak preview of these elaborate costumes. They looked fantastic!

Leaving Trinidad on June 25, we motored a few miles to Chacachacare Island which was a former Leper colony. It was eerie to say the least. All around the perimeter of the island, where the land meets the bay, are abandoned buildings which at one time housed patients. There is a church, doctor’s house, power station, and nuns’ quarters.

The buildings themselves are rather beautiful with lovely verandas, lots of fretwork, stone walks and gaily painted doors and window trims.

Over the years, nature has been slowly claiming back the land. Vines are creeping all over and walkways are overrun with underbrush. I felt like we were walking along a movie set. Perhaps, a set of a horror or sci-fi movie. The louvered doors leading onto a veranda would squeak as they swayed in and out of each building. Spooky!!

Once back aboard GRENDEL, sadly, we hauled the dinghy on deck and began to make our preparations to sail to Cabo San Francisco, Venezuela early the next morning. It was time to move on and prepare for the hurricane season.