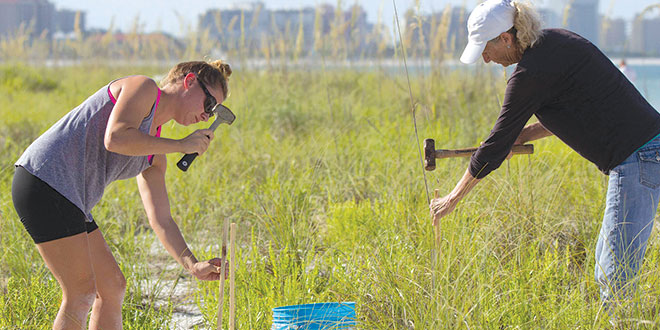 A trifecta of success unfolded this summer on the Marco Island beach. Humans, shorebirds and sea turtles were all successful in their use, productivity and healthy impact to our beautiful beach.

It is increasingly a tricky balance of the increased recreational use versus the protection of the natural beach. In the past couple weeks, when a typical seasonal northwest fall weather front blew over southwest Florida in combination with a full moon phase, it naturally washed sea squirts and other live organisms up on the beach from the near shore Gulf of Mexico. This phenomenon surprisingly caused outrage and complaints from short-time residents and tourists who had not experienced the ebb and flow of a natural, healthy coastal ecosystem. They exclaimed and wondered what and how this could happen to a “number one beach.”

For less than a week, the sea squirts — unfortunately unsightly little, brown, lumpy masses — littered the tidal zone, decomposing. For the very few complainers that “will never visit here again” and thankfully for the handful that were relieved it was not a pollution disaster and actually were interested in the sea squirts and their function once understanding “nature happens,” there were hundreds of people enjoying the beach.

Why such outrage at a naturally occurring event? While historically the quietest months in the year on any beach in Southwest Florida are September and October, the Marco Island beach had consistently high numbers of visitors consequently exposing them to the natural inconvenience of the high tides, unpredictable fall weather and ultimately, the uncharismatic, but ecologically important, sea squirt population.

That balance is tricky, but a 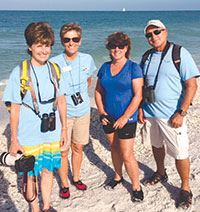 third of the trifecta success this summer was we humans and the positive effect on the beach. Although there was the noted increased of beach goers in these hot summer and fall months, there was also increased outreach, education and understanding. Monthly beach clean-ups sponsored by community businesses and groups have had large and enthusiastic numbers of participants; volunteers walked the beach daily picking up trash and talking to folks; the police department hired and trained Community Service Officers that will be more accessible to beach goers. With all this increased human activity, wildlife was able to thrive.

Yes, wildlife was thriving. Shorebirds, though precariously nesting on a very dynamic spit of sand, were given space and respect to produce. Each year, starting in April into May and June, Wilson Plovers, Least Terns and Black Skimmers settle in, breed, nest and fledge hundreds of young. One of the most productive beaches for shorebird nesting in Florida is the Big Marco Pass Critical Wildlife Area — or locally known as Sand Dollar Island “spit” — and is managed and protected by Florida Fish and Wildlife Conservation Commission with the help of Collier Shorebird Stewards volunteers. 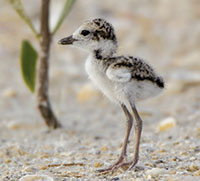 The last part, to balance this summer’s trifecta success, is the Loggerhead sea turtles nesting and hatching season. From May to just now, Mary Nelson, our long time, dedicated sea turtle monitor and expert, with her enthusiastic assistant Morgan Scarborough, monitored and managed 73 nests from Hideaway Beach, Sand Dollar to Cape Marco. On the beach by sunrise to survey for crawls and after 10 PM most nights to monitor the nest hatching, Mary and Morgan put in long days and nights to ensure that 55 of those nests hatched successfully so thousands of sea turtle hatchlings could crawl to the Gulf of Mexico. The beachfront properties’ managers and residents, too, did their part, and kept the beaches dark by turning off unnecessary lights and shielding or shading lights by 9 PM each night during the nesting and hatching season. This collective effort along the beach ensures the sea turtles’ conservation.

On Marco Island’s beach, the trifecta success of humans, shorebirds and sea turtles is sustaining a balance of a healthy ecosystem, a balance that is needed to protect the natural ecosystem that in turn will support the recreational uses we all love to enjoy. As Benjamin Franklin famously and wisely once stated, “When the well’s dry, we know the worth of water.”

For more information on the Marco Island beach and its wildlife, opportunities to volunteer or to sponsor or participate in a beach clean-up, please contact Nancy Richie, environmental specialist with the city of Marco Island at nrichie@cityofmarcoisland.com or 239-389-5003.