Traveling Off the Beaten Track, Part I 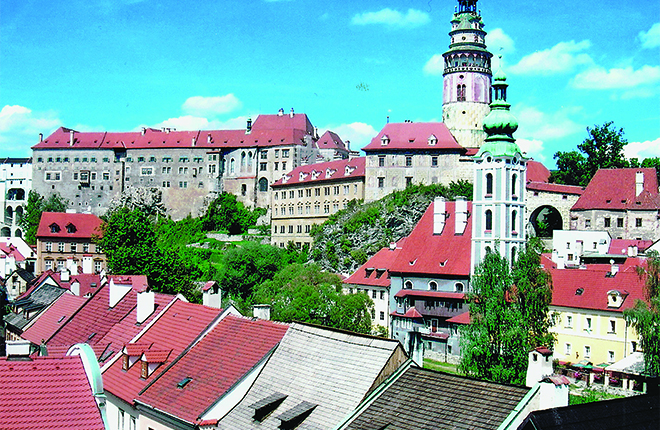 As a frequent international traveler I have had the special opportunity to explore and investigate many unique and largely unknown places not heavily visited by most tourists. These discoveries have led to a fascination with off-the-beaten destinations, many of which rival or exceed the pleasure of visiting better-known places.

Following is a sample list of many of the towns and cities that have exceeded my expectations and deserve more recognition as places also very worthy of a visit. I will try to explain why these places have so interested and fascinated me, and might do the same for you if you visit them.

1. Cesky-Krumlov, Czech Republic – I first discovered this unique town on a visit with my son Dwight in 1991 after reading that it was second on a list by UNESCO as places in Europe deserving preservation. We found it devoid of any tourists, with no gift shops, one hotel and only local services. A castle sits on a hill above this town of medieval character with twisted cobblestone streets, a center square with burgher houses, and a stream flowing through town. Years later I visited it with my wife, and we entered the town on one of over 20 tour buses there to also see it. We then discovered numerous gift shops and other tourist enterprises. It is still a very attractive place to visit, but I recall it very fondly as a premier off-the-beaten track place that I discovered and fully enjoyed seeing several years ago in its original undiscovered state.

2. Santillana del Mar, Spain – I also visited this gem of a village years ago and discovered a well preserved colonial town full of Spanish character. My wife and I stayed in a parador (a hotel that was a former palace, castle or monastery). It was on a square of former noblemen’s houses. We most enjoyed sitting in its plaza in the morning and watching local herders drive their cattle through the town. It is also near one of the oldest prehistoric Cro-Magnon caves that have been discovered. I treasured it for its preservation of authentic Spanish culture.

3. Matera, Italy – I stayed here recently in a well-appointed room inside a former troglodyte cave dwelling. It is an unusual town full of these caves, and is believed to be one of the first human settlements in Italy. I felt like a Stone Age cave dweller as I ate, stayed and shopped in former caves, many in semi-original condition. It is a very popular place for Italians to visit in southwest Italy, and deserves more notoriety from Americans. You will seldom discover a more unique and unusual town.

4. Domme, France – This town sits on a high bluff in southern France with a spectacular view of a mosaic of pastures, green fields, and the meandering Dordogne River, one on the most peaceful scenes I have ever viewed. It is close to two castles that were opposing British and French forces across the river during the 100 years war, the medieval city of Sarlat, and the prehistoric cave of Lascaux, known as 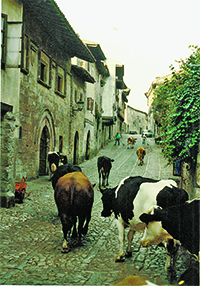 the Sistine Chapel of Cro-Magnon art. This is a great place of daily explorations.

5. Dinkelsbuhl, Germany – This is a romantic road town south of the more famous town of Rothenberg, thus providing a quieter place to enjoy the same type of ramparts, watchtowers and medieval appearance. It is also aptly known for its famous gingerbread, the smell of which fills every street of the town. We stayed there in a hotel dating from 1440, which is the oldest in town.

6. Gjirokastra, Albania – It is a charm to see this perfectly preserved medieval town in a country that is also seldom visited by U.S. tourists. It lies on a slope of a steep hill beneath a massive 15th century fortress and cobblestone streets that lie beneath old stone and slate roofed homes. An Ottoman bazaar occupies the center of town. It is little changed over the years.

7. Perouges, France – This is also an equally attractive medieval village, which remains fortified and has well preserved stone buildings adjoining its narrow, twisted cobblestone streets. It is one of the most authentic Middle Ages towns that I have ever visited. Nearby, along the Rhone River, is the companion medieval village of Viviers, which is equally worthy of a tour.

8. Mostar, Bosnia – If one is seeking to find a flavor of Muslim culture, this charming historic town would provide you with this taste without having to venture to the Middle East. It was heavily damaged during the war with Serbia, and that evidence remains, but it has perfectly rebuilt its 16th century Turkish bridge, which dominates both parts of the town. Ottoman culture remains in this place of great historic value. My wife and I experienced it when we slept on mattress on the floor of a Muslim home several years ago.

9. Durnstein, Austria – Cruising along the Rhine, Danube and other rivers of Europe reveals countless towns and villages of incredible beauty. My favorite is Durnstein which lies along the Danube beneath a castle ruin that once held Richard the Lionhearted as a prisoner following the Third Crusade. A Baroque church with a high tower painted in a pale blue dominates the town. I enjoyed staying in this fortified town as well as passing it twice on a cruise ship. My other favorite river towns are Rudesheim on the Rhine, Meissen on the Elbe, and Bernkastel on the Mosel.

10. Burano, Italy – This is a neighboring island to Venice, and can be easily reached by ferry from it well known neighbor. It is a very colorful fishing village with all the homes along its canals painted in vivid pastel colors. It is a treasure to be discovered by a photographer.

Dave Pattison has lived in Marco Island since 1999. He has traveled to every continent and over 100 countries, and still takes five-six trips annually. Dave is a well respected travel wrtiter, winning first place in a Florida Press Association contest. Dave was a lawyer/lobbyist for the insurance industry, and had worked in the White House for four years before retiring. A widower, Dave has four adult children and five grandchildren.