Transitions and Collaborations at St. Mark’s

by Janet DeAnna (with Tara O’Neill)

Epiphany Project Windows – Each artist brought their own vision to their window. Can you determine what window matches what Epiphany theme?

Father Kyle came to St. Mark’s Church seven-plus years ago with a great appreciation for the arts. Among other things, Fr. Kyle is also a writer of both song and book. He was delighted to learn that we had a rather loose knit group of members with talents in many areas – we called ourselves the “Artists in Residence” (AiR). Kyle encouraged us to create works that could be used in worship in the sanctuary that represented our liturgical seasons. In 2009, AiR took on the project of producing Stations of the Cross. This was a multi-media project (watercolor, clay, oil, charcoal sketch, collage) that brought our artists together for the first time working as a collaborative group. These stations are hung in the sanctuary each year during Lent and used as part of a meditation series. The pieces were inspired by scripture and also by music Fr. Kyle had written.

Ever since that first venture, Fr. Kyle has been encouraging us to create stained glass pieces for our ten sanctuary windows. This was a daunting request and we stealthily skirted the issue for several years. Instead we used our talents to create other art forms that tell the story of the seasons: Advent Shadow Boxes (displayed during the weeks before Christmas); Season of the Resurrection cloth window panels designed to look like stained glass (on display following Easter). Although Kyle appreciated our efforts, he kept pushing us to do something in glass.

The Summer of 2011, we began to look into what we might accomplish even though only one of us, Cathy Weis, had any experience working with glass. We met with people who produce leaded glass pieces, stained glass pieces and we even researched fused glass – coming up with

nothing we felt we could do well without a lot of schooling and the purchase of expensive equipment.

One day, I met with Donnie and Elaine Jones at their Art Glass studio here on Marco. They were quite amazed that we would consider this undertaking without training. After talking to them I came away thinking the whole idea was impossible. At their suggestion, I brought Kyle to their studio to discuss etching glass – with Don’s help, of course. Lo and behold, Elaine showed us a small experimental glass tile that she had put together, demonstrating a technique we could probably master. Bingo! From there on it was just a matter of gathering materials and understanding the process she used. Kyle wrote the verses for Epiphany, the season right after Christmas; ten verses for ten windows. Or ten windows for ten verses.

When we had the lyrics we put the word out and amazingly, people in our congregation that had never involved themselves with our former art projects were anxious to be on board with this one. They selected the scripture that spoke to them, then designed and implemented their individual, or often shared, work. We had 18 people in all at work on ten windows. Because of the need to explain and demonstrate techniques new to us, Cathy Weis and I had a little involvement in almost all of the windows. Cathy not only had experience working in glass but she already owned many of the things we needed. She mentored everyone in some way. We were pretty sure we had come up with something truly exciting – and lasting.

Each artist drew on paper what they wanted to reproduce in glass then placed the drawing under a clear piece of glass, then on top of that put a clear glue-paper. The images emerged like pieces of a puzzle from broken glass. When finished, we heated the piece with a glue gun which released the adhesive from the glue-paper. We let set for 24 hours then grouted it with a charcoal grout.

The Epiphany is observed from January 6th until Ash Wednesday. This year, it fell on a Sunday and that was when we unveiled our glass panels. (Epiphany is the Greek word meaning “to show or make known – to reveal.”) The morning we unveiled the glass windows we did 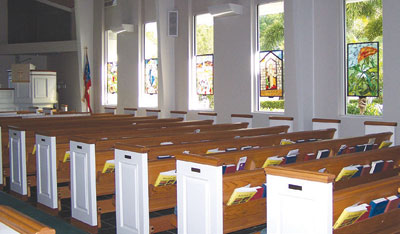 The windows were revealed on January 6th and removed after Ash Wednesday. They will be rehung next Epiphany season.

it rather dramatically at the end of the service. The windows had been draped during the service and at the end Kyle invited the members to listen to the music he had written about each window as the artist removed the cloth to that particular window. Shane Totten, our youth director, supplied the melody to Kyle’s lyrics and so he sang to his accompanying guitar. I didn’t know what to expect but the response of the congregation was overwhelming – from tears to a standing ovation.

As for how the project affected those involved, it caused us to examine more closely each major event in Christ’s life and how that event might be portrayed simply and without words. It has inspired us to extract the essence of what He was trying to get across to us. I cannot presume to speak to what each artist felt while making his or her window but I do know that I heard several times from them that the piece once started just seemed to create itself – that it took on a life of its own.

Though each artist alone came up with the drawing they thought best portrayed the scripture; they drew from each other’s experiences, successes, and mishaps, to get the work done. Many of the pieces were done by two artists working collaboratively, sometimes even three.  There were husbands and wives working together for the first time on an art project. There were, of course, friends working together and the entire Bennett family was involved in some way with their piece.

As each piece was finished, the other artists were so enthused for each other and anxious to see the outcome. The framing of these 2’ x 3’ pieces and the work our John Fedor did to aid in the display and also keep the pieces safe from breakage was tremendous. John also built a cabinet to house them while they are put away, waiting to come out again next year.