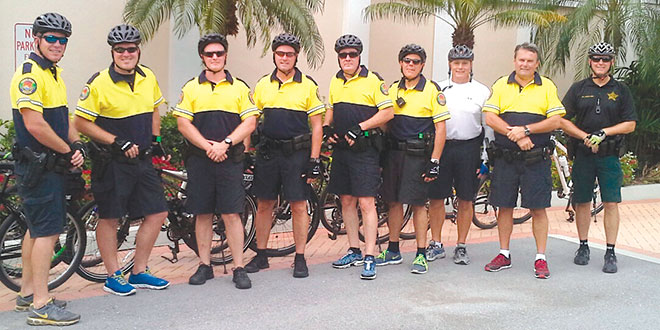 Training to be a Marco Island Bike Patrolman is no ride in the park, as six officers demonstrated on test day. Under the critical eye of instructor Andrew Penny, a Lee County Deputy Sheriff and member of the International Police Mountain Bike Association (IPMBA), the trainees practiced braking, serpentine maneuvering and riding up and down stairs on the final day of their 32-hour class.

The course was designed to simulate conditions the bikers may encounter while on patrol in the streets, alleys and parking garages around the island. All officers in the city’s second round of bike training passed their certification test and will be equipped with specially outfitted cycles complete with sirens and lights ready to take to the streets of Marco Island. The patrol includes officers Brian Granneman, Zachary Kirsch, Jeffrey Stafford, Josh Ferris, Clayton Smith and Mike Ludwig. 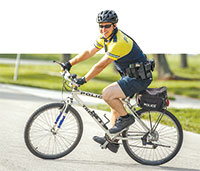 Police Chief Al Schettino said the bicycling officers are now on the road and are visible in shopping areas, schools and riding around town. “The patrol’s value to the community is the personal interaction with the officers,” Schetttino said. He compared the cycling officers to “foot patrols” found in larger cities. Cost of starting up the bike patrol required no extra allocations, he noted.

The newly trained bicycle patrol strapped on their helmets and began their intricate series of test jumps, stops and tricky turns on the stairs of the Marco Island Police Department. Deputy Penny evaluated each trainee, sometimes requesting a do-over. The group clad in bright yellow bike shirts rolled into line-formation and followed their bike leader out of the parking lot to their next testing stop, Marco Lutheran Church. Along the route on Collier Boulevard, the patrol practiced traffic maneuvers and signaling. Various stops, curb jumps 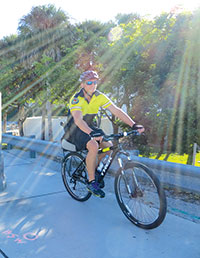 Officer Josh Ferris takes the lead, riding down Collier Blvd. to the next test site.

and braking techniques were performed in the church’s parking lot and stairways. There was also an emergency repair. Each bike is equipped with basic tools to fix a tire or chain.

The final stop on the test course was the multi-story parking garage at the Marco Island Beach Resort. Pedaling up to the second concourse, the now sweat-sodden officers performed the most tedious portion of the test. Called the “slow box” a series of traffic cones were set up in a nine-foot by nine-foot square, the estimated size of a parking space. Bikers were required to enter the “box” and ride three times around in each direction avoiding contact with the cones. No easy feat, as several officers discovered.

After a couple practice rounds, there was a 100 percent success rate. Finally, the serpentine, another course of cones, challenged officers stamina and concentration. Cheering each other on, the test concluded with a times cone-obstacle run.