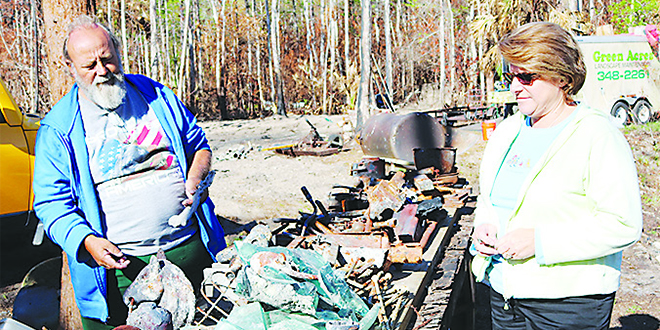 Photos by Steve Stefanides | Todd and Monique Waldeck look over all that is left of their 1,700 square foot stilt home.

It’s hard to believe that about a month ago the scene along Benfield Road was one of an inferno, rather than the serene and quiet area that Todd and Monique Waldeck had fallen in love with close to 30 years ago. The only evidence one could see from the narrow single lane road was the charred bark on trees from the terrible fire that raged throughout this area of the county last month.

The Waldecks had built their dream home on their piece of paradise almost 17 years ago, but Mother Nature would play a cruel trick on them after living in the peaceful and tranquil area of the county that few are aware of.

The fires last month that consumed approximately 7,500 acres in the Picayune Strand destroyed their 1,700 square foot stilt home, which they had personally built themselves. “What was ironic was the fact that the fire had supposedly moved away from our area on Monday and forestry personnel had removed some of the larger equipment used to cut firebreaks and relocated to 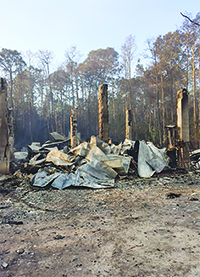 other areas to battle the blaze.

However, the winds changed and on that Tuesday we were forced from the house. I actually had to drive through the fire, that’s how quickly the fire moved. I was lucky to get out.”

On Tuesday night, around 6 PM Waldeck worked his way back through old back roads to reach his house, to find it still burning.
“I took my neighbor with me and we worked our way back; his main house was fine but ours was gone,” said Todd Waldeck.

When the Waldecks say everything was gone, they weren’t exaggerating…everything was destroyed, and they’ve been attempting to work on putting their lives back together since that fateful day.

“We love this land and one way or another we will rebuild on this property,” said Monique as she sifted through some of the debris piled on a six-foot table. “It’s really too bad you couldn’t see how beautiful it was before the fire.”

On top of the challenges presented by the loss of the fire, Todd Waldeck had 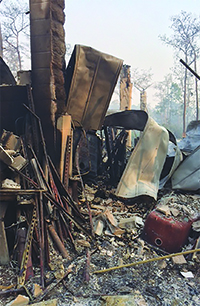 only been out of the hospital for two weeks and was recovering from a serious heart attack, but he wasn’t about to let his two setbacks get him down. “Like Monique said, we love it out here and will do our best to recover and enjoy the rest of our lives without feeling sorry for ourselves,” said Todd Waldeck.

A contractor has been brought in and the ruins of the home have been removed and the old concrete slab has been broken up and sits in a dumpster. That dumpster holding the concrete was one of four which was donated by YAHL Mulching and Recycling, and has helped the Waldecks to clean up their site to be able move forward with their plans.

Todd Waldeck is employed by Marco Glass and has been in the glass business for 37 years. Monique works for the Ritz Carlton in Naples.