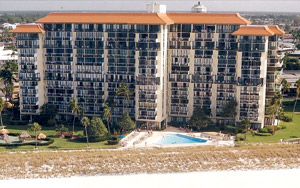 How old is Marco Island exactly? Currently celebrating its 15th Anniversary as an incorporated City, we all know our island home is much, much older. Thousands of years old, if not more. Thanks to Calusa Indian remnants we know this much. Settlers came in the late 1800‘s; fish camps, schools, general stores and even a hotel or two followed. The era of “Modern Marco Island,” however, began on January 31, 1965.

The Tradewinds Condominium along Crescent Beach was the fourth high rise, built in 1973. This may not answer the question as to how old Marco Island actually is but it does mean that Tradewinds is celebrating its 40th birthday this year – 2013.

Last year, Wilma Sanders, a Tradewinds resident of 24 years, realized this special anniversary was approaching, “and I really thought we ought to commemorate it in some way,” she explains. “I have no knowledge of Power Point, but some friends agreed to help me put something together.”

And then Wilma met Kevin McManus. A new resident to the building in May of 2012, Kevin and Wilma met when she returned to Marco in the fall. “When I heard Kevin’s credentials, I knew he would be the man who could really make something happen, and Kevin graciously signed on.”

“My suggestion to Wilma was to jazz it up a little bit and do something more film-like if you will,” adds McManus, who just happens to be a retired videographer of 28 years. McManus filmed live television for NBC and its affiliates for many years, spent a year at CBS during the Katie Couric era and was also the Director of Broadcast Services for the US Senate. “I did a lot of world travel [for my jobs],” he explains. “I was in Rome in ’05 for Pope John Paul’s passing. I went to the Sydney Olympic Games, 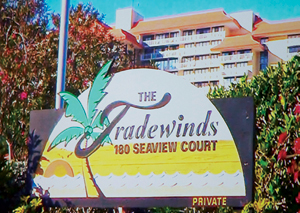 Iran, Iraq and Afghanistan.” Making the decision to switch to a more leisurely lifestyle, McManus is self-employed, uses his own equipment and is currently focusing on high end real estate videos.

McManus was more than willing to share his equipment and time to put together the 40th Anniversary piece for the Tradewinds. What began as a simple Power Point idea turned into a 15-minute short film not only on the history of Tradewinds, but also on the beginning of Modern Marco in general.

Together, Sanders and McManus produced a video featuring old photos and video footage of Marco Island, set to a script written by Sanders. The collaboration taught them both something new. Sanders learned the creative process of movie-making while McManus learned quite a bit about Marco’s history.

An interview with Herb Savage, one of the great architects of the Mackle Brothers and Deltona Corporation era, of course, helped McManus expand his knowledge of local history. In the video, Savage recalls the early days of his work with the Deltona Corporation. “Frank Mackle was quoted as saying, ‘I couldn’t believe Marco the first time I saw it. I had made a special trip over from Miami in 1962. We stood on Crescent Beach where SR-92 ended and it was fantastic – just fantastic. I decided right on the spot to turn Marco into a paradise everyone could enjoy.’”

The largest of the 10,000 Islands in the Gulf of Mexico, the Marco we know now began to take shape, with Emerald Beach being the first condominium built along the shoreline, reaching seven stories in height. “I was architect number two and I was in charge of doing the buildings, explains Savage. “As time went on, Jimmy Vensel then began to plan the waterways and so forth.” Vensel also named all the streets on Marco.

As development of Marco moved at the speed of light, an architect named Jim Dean was chosen 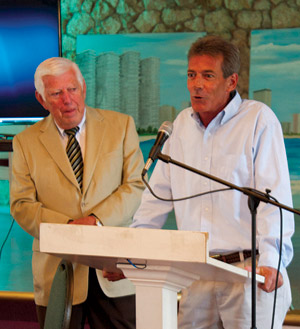 Kevin McManus addresses the crowd at the movie’s “debut.”

to design The Tradewinds. But there was one problem – it wouldn’t fit on the lot. “I said, I don’t think so,” states Savage in the film. “We can angle it at a slight angle and probably improve the views in the units. And that’s what we did.”

And so, The Tradewinds was the fourth built condominium on Marco Island, reaching 12 stories in height. Jim Vensel, head of Deltona’s architectural and engineering department, purchased his own condo in The Tradewinds, “which he kept for many years,” according to Wilma’s script.

The 15-minute movie short discusses many other changes to The Tradewinds and Marco Island from the early 1960‘s up until the present day.

“Tradewinds is much the same as it was 40 years ago. It is unique, beautiful and well-loved by the residents,” states Sanders in the film.

“I feel, Tradewinds architecturally is a very pleasant facade,” adds Savage near the end of the film. “I think the significance of the Tradewinds was the exterior, the orientation on the site; it has a tremendous amount of inspiration when you look at it. It was a great experience for me. The entire 19 years I was with [the Mackle Brothers] – so every Tom, Dick and Harry could have a home here. Frank Mackle said, ‘Herbert, I want homes for young people, working people, retirees and anyone else.’ They gave every synagogue and every church site free. The attitude of the people who live here – it’s an atmosphere of camaraderie rather than hard-nosed business dealers. People are happy here.”

Wilma Sanders, Kevin McManus and the rest of the residents at Tradewinds couldn’t agree more. Perhaps the rest of Marco Island’s residents also feel the same.