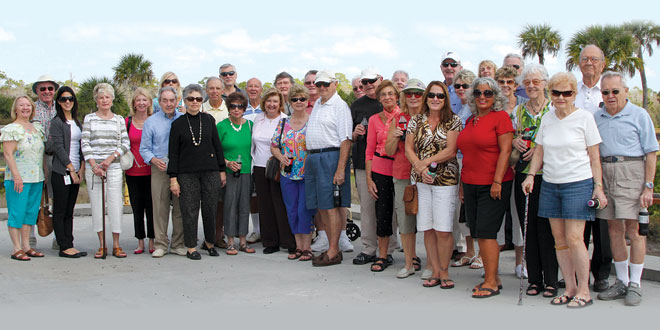 For the first time, tours with County Commissioner Donna Fiala featured a property that was not county-owned, Treviso Bay. The popularity of the tours has grown and this one was no exception. Well beyond capacity, Treviso Bay accommodated the group by hiring a trolley for guests to tour the property and when the trolley was full, they hired another.

Treviso Bay was started by VK Development, a developer out of Wisconsin. One of the primary amenities of the Treviso Bay is the Tournament Players Golf Course. However, the downturn in the economy put a halt to the project and eventually, the grand fountains at the entry were stopped. In December 2011, Lennar Homes bought the property and with no pun intended, put the development ‘back on course’. Several homes and condominiums are occupied. New sales and construction are moving at a steady pace. The fountains flow freely once again. Plans for the next phase of development are underway.

Properties in Treviso Bay range from $180,000 condominiums, to luxury homes in the millions. Different than most community developments in Southwest Florida, club membership at Treviso Bay is included in the cost of your home. Plans call for a grand clubhouse featuring eight tennis courts, pro shop, health club, spa, fitness center, aerobics and pilates studios, billiard and card room and resort-style lagoon and lap pools as well as casual and formal dining areas. All of this will be offered in addition to the world class golf course. The association is set up as up as a non-profit and will eventually be given back to the property owners.