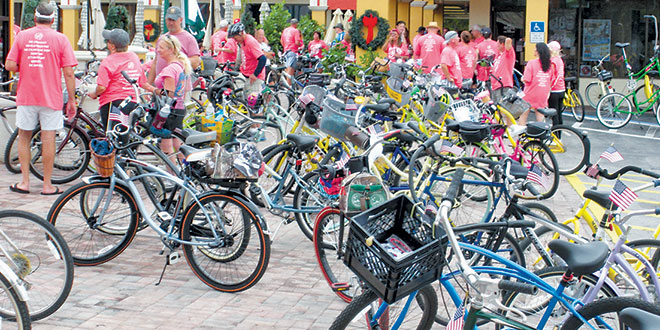 Just a portion of the bikes and people at the seventh annual Tour de Taverns arrayed outside Rookies. PHOTOS BY DON MANLEY

It’s no exaggeration to say that a good time was had by all at the Tour de Taverns Bicycle Poker Run. Of course, that’s pretty much a given where the annual fundraiser for children suffering from a serious illnesses is concerned.

This year, about 210 riders took part in the tour, which began at the Sand Bar and preceded on to Rookies Sports Bar, CJ’s on the Bay, the Snook Inn and the Old Marco Pub, before concluding with a bang at The SpeakEasy.

For a $25 entry fee, riders got a commemorative t-shirt and biked from tavern to tavern on December 5, selecting a playing card at each of the seven stops. The person who finished with the best hand collected $100 at the last stop, where

there were also raffles and prizes.

SpeakEasy co-owner Jimmy Boylan started the Tour de Taverns in 2009 when he was a manager at the Sand Bar. “We started it for locals to just see how it would work out,” he said. “We started with 60 riders and after that, it just blossomed.”

As tour participants chatted, dined and danced to the tunes provided by DJ Johnny Fusco, Boylan said the event is perfect for Marco Island “because everyone loves riding bikes. We took the motorcycle poker run and replaced it with bicycles and as you can see, they love it.”

This year’s recipient was 2-year-old 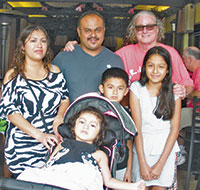 Jeanette Rodriguez is joined by her parents, Linda and Jose, left; her siblings,Jose and Jasmine; and Jimmy Boylan, Tour de Taverns founder and organizer.

Jeanette Rodriguez of Immokalee, who is battling a form of cancer, Langerhans Cell Histiocytosis. The disease has left the bright-eyed youth unable to sit, walk or talk.

Jeanette and her parents, Linda and Jose, and her siblings, Jasmine, 10, and Jose, 7, stopped by The SpeakEasy to meet and thank the riders. Linda Rodriguez said her daughter had recently returned home from the hospital after another round of chemotherapy.

“It’s been pretty tough for the last two years since she was diagnosed, but she’s hanging in there,” said Linda Rodriguez. “She’s strong. She’s very strong. Hopefully, this week that is coming up will be her last dose of chemo.”

Boylan selects the recipients. “It takes some work to find them,” he said. “With privacy issues and things, people don’t want to

Ryan Peacock, left, dressed as Richard Simmons, and Chris Mercier aka “The Penetrating Penguin,” lead some tour participants in calisthenics.

tell you that there’s somebody who needs help.”

This year, he approached the Golisano Children’s Hospital and the staff suggested Jeanette and her family.

Linda Rodriguez said she was shocked when she learned that her family had been selected to receive the assistance. “I didn’t know what to say in the beginning,” she added. “It feels great. It’s amazing.”

The tour attracts returnees as well as first-timers such as Lisa Hicks of Naples, who came with two family members and two friends, all of them newcomers to the event.

“It’s a fun event and it’s for a good cause, and I like to support local people and families,” said Hicks.

For snowbirds Wes and Jenny Kehler of Mississauga, Ontario, this was also their first tour and like Hicks, they were attracted by the 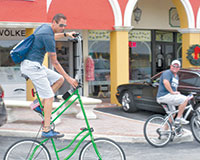 Michael Milner of Naples awed onlookers with his custom creation.

opportunity to combine fun with raising money for someone in need.

“This is amazing and the amount of people that are out here, it’s just fantastic,” said Wes Kehler after the couple pulled into the parking lot outside Rookies. “I think it’s going to be a great day, a great event.”

Like Downey, Joe Warrington and his girlfriend Beth Weimer have also participated in every tour.

“It’s a blast,” said Warrington at the Rookies stop. “We know everybody who does it. I think there’re 180 riders this year, which is great, so we can raise a good amount of money for this little girl who needs it.”

Weimer echoed those sentiments. “It always makes your heart feel warm that you’re donating to a good cause and riding bikes with all your buddies is good too,” she said with a laugh.