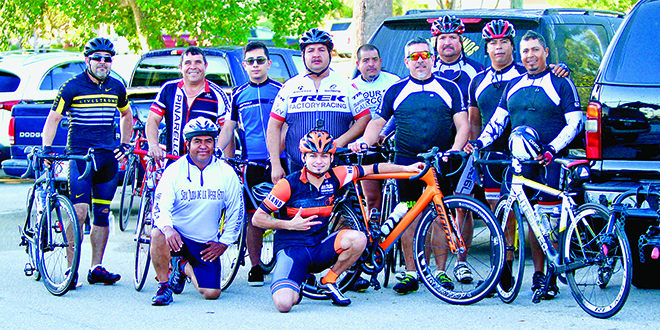 The guys from Progressive Auto credit Tour de Marco with getting them started in cycling. They started with a handful of entrants and now number 11-strong.

Tour de Marco was started in 2011 as a project of the City of Marco Island’s bike path committee. The idea was to showcase the island’s then-new bike pathways system. Eventually the Y has taken ownership of the event, with Reynolds leading the way. Members of the bike path committee still help with the tour, with seven committee members involved in this year’s event.

Tour de Marco still celebrates Marco Island’s commitment to bicycling. The island has over 40 miles of in-road bicycle lanes and shared use paths, with more to come.

Riders enjoyed temperatures in the high 60s at the beginning of the 30-mile tour, which 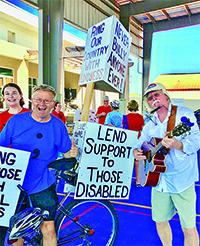 Natalie Hughes, a student at MIA, Bob Votruba of the One Million Acts of Kindness tour and Marco’s Artist of the Year, JRobert, at the conclusion of Tour de Marco 7.

led riders from the Y, down Collier Boulevard, through Key Marco, into Goodland and through the estate area of the island. Riders from outside of Marco were surprised to find that Marco does indeed have hills.

This year’s tour featured entertainment for the first time as Marco’s Artist of the Year, musician JRobert, entertained the peddlers with his catchy song “Life in the Bicycle Lane,” performed on his acoustic Gibson guitar. The tour also had a visit from Bob Votruba and his One Million Acts of Kindness tour. Votruba’s national tour is dedicated to children with disabilities and differences.

Marco Island Academy (MIA) became involved with Tour de Marco for the first time this year. Six members of the MIA Key Club were among the 25 volunteers. The students’ youthful exuberance was appreciated by the cyclists.

This year’s tour was not without incident. Marco Island’s fire and rescue services were called upon twice and responded beautifully.

Reynolds announced that Tour de Marco 8 will be held on Sunday, February 25, 2018.