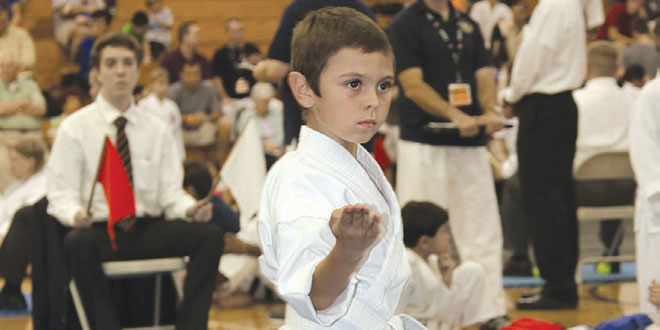 I’ve written once before about Goodland’s own, Nick Lemke, and his Shima Dojo, at the Marco Island YMCA. To this day, it ranks as one of my most favorite stories. Every time I talk to Sensei Nick and his students, I get to know them better, and I love that each person in this close-knit group is just as committed to each other’s success as they are to their own personal achievement. I always feel welcome into their dojo family.

In fact, many of his students are family, like brothers, Luca and Santino Galvez; father and son, William and Ford McKee; siblings, Kirra and Chase Polley; and Laurie McCardle and her daughter, Leah.

Soon, I hope to add my family to that list. The decision to sign my eight year-old son up for classes was made months ago, but as I did this story, it became evident that it wouldn’t

take much convincing for me to join as well. Lemke’s students love him. He motivates them to remain steadfast, and they respect him for it.

“Nick is the greatest. He doesn’t just teach the art of karate; he actually teaches the kids all about the history and they learn Japanese. They learn so much more than just the routines,” said Kim Polley, mother of sibling students, Kirra and Chase. “It’s all about the whole culture of karate, not just taking the classes.”

“It’s very rigorous and traditional; it’s a way of life. You have to keep up with it, and it takes a lot of dedication. You get knocked down, but you just have to keep getting back up,” said 16 year-old Marco Island high school senior Ford McKee.

Since we last met at their April fundraiser at Marker 8.5, the Shima Dojo has been working hard, and they’ve seen that hard work 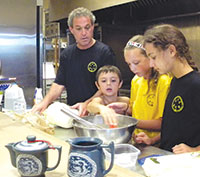 The kids and their sensei preparing Tuesday’s lunch, okonomiyaki, a traditional Japanese dish.

pay off in the form of a recent run of tournament success — all unplanned. With one month to prepare, and learn a set of rules greatly differing from his traditional style of teaching, Lemke, his students and their families collectively decided to test their skills at this year’s AAU district karate tournament. There, each student took some variation of gold, silver and bronze medals, and have continued to do so at both state and national events.

“It was a little bit stressful, but well worth it. We went into the first one thinking, ‘We’re not going to come back with anything.’ When we got our first medal, we were surprised; and what we did there was exactly what we had been doing here,” Ford said.

On Friday, Aug. 1, Shima Dojo put forth yet another winning performance at this year’s AAU Junior Olympics in Des Moines, Iowa. On a cross-country phone 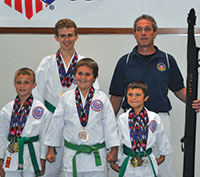 Posing for a picture with their sensei, the students with the medals they earned at the 2014 AAU Junior Olympics.

call immediately following the tournament and their traditional celebratory sushi dinner, the kids excitedly took turns telling me how they each did.

“It’s awesome; we’re so happy,” said Lemke. “I’m so proud of the effort everyone put in. They couldn’t have done as well as they did without the hard work.”

They’ve just finished with their final week of karate camp for the summer. The five days of hard work sampled the broad spectrum of what Shima Dojo students learn, including cultural lessons. Each day’s lunch break featured traditional Japanese meals, prepared by Lemke and some of the kids.

The hectic pace is slowing as the school-year approaches, but the dojo remains busy with events throughout the year, including an upcoming trip to Atlanta, where each year they attend an all-day karate symposium at their home dojo.

I expect the steady flow of good news will continue from this group of dedicated karate pupils and their equally dedicate teacher.