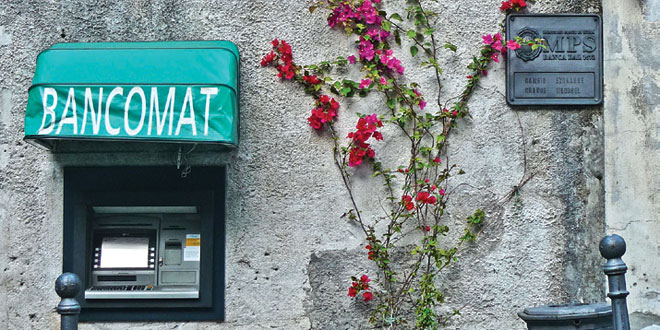 I often get questions about travel and want to address the most common ones. I’ve written about some of these issues before, but there are some queries that keep coming up and there is always new information to share. By far, the top question I get is about exchanging money and using credit cards outside of the US. Because I want to try to provide comprehensive information about this topic, this entire column will address that matter. In my next column, I’ll tackle answers to questions about insurance, passports, lost luggage and the technology to help avoid it, and how to protect yourself when using public WIFI.

What is the best way to exchange money? My response is to use ATMS which are called Bancomats in Europe. What about obtaining some local currency before your trip? I never do that. Most airports have ATM machines so you can get cash upon arrival. A little research ahead of time and you will even know the location of the machines. Google the name of your airport and “ATM”. Major airports have websites (if not apps for your smartphone) that list services available. Incidentally, if you want some smaller bills for tips, etc., just use one of the larger bills you received from the ATM to purchase something like a bottle of water. In the US, using a large bill for a small purchase is not always welcome; not so in many other countries; they seem to be far more accustomed to accepting and changing larger denominations.

ATM cards often have transaction fees of 3-8%. Some of the larger banks have international partners where you can use your ATM card without a fee, but you have the inconvenience of trying to find those branches. With some ATM cards, if you go outside of their global membership, fees can be quite high. Some US banks that offer fee free ATM cards domestically charge for international transactions. Check with your bank. I used to recommend opening a Schwab checking account and I still do with one caveat. Using an international ATM is fee free with Schwab but their cards do expire and they don’t automatically send you a new one; you must be aware of the expiration date and request a new one if you haven’t used it in the last 6 months.

The ease of using an ATM is not the case, however, for most developing countries where ATMS are not ubiquitous and in Japan. Japanese ATMs use a different size card. However, there are USA ATM card compatible machines at airports, post offices,7-Elevens (Japan has more than 10,000 7-Elevens), large department stores and shopping centers, and some banks including Citibank. In China, some ATM machines are compatible, some aren’t. Most international hotels in China have ATMS that accept “foreign” cards. (Yes, our cards are the “foreign” ones).

If you do want the security of local currency ahead of

I always learn the exchange rate before I go on a trip. Of course I have a terrible memory for numbers, so at oanda.com I print a little wallet sized cheat sheet. Remember, the ATM machine in another country will ask you how much of the local currency (not the US equivalent) you want.

What about the currency exchange kiosks? Fees here can be as high as almost 20%. Remember they are not exchanging money out of the goodness of their hears; their profit comes from your money.

What about travelers checks? I used to always use them; back in “the old days” major cities had American Express offices where they could be cashed fee free. Those offices are now gone and it can be difficult to cash a travelers check. There can be high fees attached and even banks don’t seem to want to handle them. I’m told that the exception is in China where there is a low rate regulated by the government; yet they are still not recommended as supposedly only the Bank of China is permitted to cash them and the process can be quite time consuming. Because I am a “belt and suspenders” type of person, I still carry some travelers checks in case of an emergency.

Travelex used to offer a Cash Passport prepaid local currency card. This card, however, is no longer available nor valid.

Should you pay your bill in local currency or dollars? Some hotels and other establishments may offer you that option; it is called Dynamic Currency Conversion. You may see it as a way to avoid transaction fees if you don’t have a fee free credit card. Be aware that if your credit card company charges a transaction fee for foreign currency they may also charge that fee even if the hotel charges you in dollars. Also, the exchange rate offered by the business establishment may be quite a bit worse than that of your credit card company. Rental car companies (yes, even the “big”ones whose name we recognize from the US) are notorious for that. When offered an option, pay in local currency and get a more favorable rate.

Will my credit card work in other countries? In the US, our standard credit cards use a magnetic strip, however many banks outside of the US use a newer “chip and pin” card, known as EMV technology. Account information is embedded in a chip and is verified by your personal pin number.

This doesn’t render your outdated magnetic strip card unusable. The three major credit card companies require businesses to accept any valid card. The problem may come at machines such automated kiosks where one buys train or bus tickets, 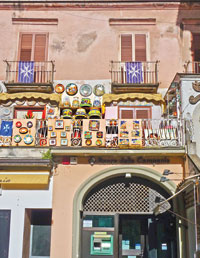 You can often find them tucked away near shops…

parking lots, and some gas stations. In some cases, there may be a staffed ticket window where you can use your card. However, in places such as parking lot or even some 24 hour gas stations in the middle of the night, there might be a problem. To make matters a little more difficult some parking lot machines require EXACT change.

The good news is that EMV cards are beginning to be issued in the US. Chase seems to be in the forefront. Some banks offer them for corporate customers only. Citi and Bank of America offer them most notably via one of their airline rewards program cards. American Express Platinum members can get them by request; but many places don’t accept American Express. Wells Fargo began to make them available on a pilot basis which reportedly has closed. Flyertalk.com maintains a list of those chip and pin cards available. If you want one and your bank doesn’t seem cooperative, check out the Andrews Federal Credit Union Globe Trek Visa Rewards Card. I’ve not used it but a lot of travelers recommend it. An added advantage to the chip and pin type card is that magnetic strips sometimes gets scratched rendering a card unusable in machines.

I have never encountered a problem with my magnetic strip card, but except for hotel rooms (which have often been prepaid) and large purchases, I rarely use a credit card when we travel outside of the US. I guess it’s a holdover from the time when credit cards were not widely used in Europe and the fact that we tend to go to smaller, local restaurants where often cards still aren’t accepted. If you are using your card for hotels, restaurants, and shops, the lack of chip and pin should not be a problem.

Chip and pin aside, many card companies charge conversion fees of 2 to 3 percent. I used to recommend Capital One cards but be aware that they don’t offer chip and pin. Some Chase, some Bank of America, and Schwab offer cards with no fees as does American Express Platinum. Check with your issuing company before traveling if you are going to use your card extensively. Or, just consider the 2-3 percent part of the cost of travel! Websites such as nerd wallet, cardratings, cardhub, and creditcards.com provide information about the fees and benefits of various cards.

Regarding security for my cards, I always carry a back-up second account card (both credit and ATM) in my security pouch. I also keep a copy of account information including contact phone numbers in the pouch and also in Dropbox; that way I can access it online from anywhere. When traveling, don’t forget to call your card company to let them know where and when you will be traveling so that they don’t put a fraud stop on the card when atypical charges are posted; an exception to this is American Express which no longer requires notification.