Tomorrow is Promised to No One 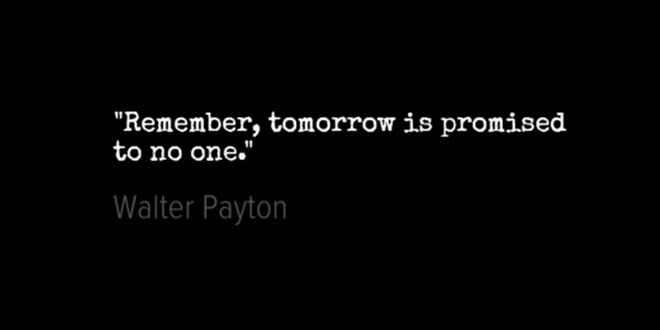 I think every generation that has come before us can point to the changes that they have witnessed over their lifetime. Some of those changes may have been positive, while others are of a questionable nature and may result in adjustments to our thought process going forward.

I’ve always enjoyed sitting with so many of you, as you’ve spoken of your experiences and the changes you’ve had the opportunity to witness on a personal basis.

Some of our veterans who served in World War II or Korea have always had some very interesting reflections on their lives. How they met their spouses and the challenges they faced as they came home and began the process of creating their lives, bringing up their families and enjoying the fruits of their labors.

On a recent trip to New Hampshire back in July, my brother, sister and I were able to all be together for the first time in several years. My brother still lives in New Hampshire and my sister has traveled throughout the world on various teaching assignments. Now that we are all getting a little older, those times together have become more important to me, as we would talk and laugh about the “old days.”

Many of them had long ago retired from their jobs. Some had lost their spouses, while other were surrounded by many grandchildren and great grandchildren. It was nice to sit under a tree in the backyard of one of those friends and just reminisce. He was in his 80s now and was proud to show me the new chicken coop he had just completed and display some of the rewards of having his own laying hens.

He had told me of another friend of ours, who was in the Tilton Soldiers Home and encouraged me to visit with our old lieutenant. I’m glad I did, for a few weeks later he passed from us. I’m not sure whether he knew me, but he was happy to have the company by his bed.

Saw several others on that trip and visited some important places that meant so much to me growing up. Whether it was walking by my dad’s old barber shop, my old high school or just strolling past a couple of the old fire houses I had worked out of. Most of those have long been replaced by newer structures that lacked that special character and history that the older stations possessed.

I got the opportunity to make the most out of this trip, but it also got me to think about why we have become so focused on wanting “instant gratification” and choose to rush through life without taking along any of the special memories I know we all have from growing up.

I thought about how things have changed since I started working in earnest almost 50 years ago. I thought about the changes in technology and the balance between making us more productive versus having us understand the value of our work and those relationships that we create during our lifetimes.

I look over at tables that surround me in restaurants and see the impact of the digital age. The fact that families look down at smart phones or other devices rather than at each other, while missing an opportunity to share something between themselves as individuals, and think about the missed opportunities they are having.

We brag at how “connected” we are in this digital age but fail to see the impact it is having on us and the ability to relate with one another, therefore leading to a big disconnect with those that should share a special place in our lives.

I don’t mention that because I’m immune from that fault, but because I have been just as guilty and I choose to admit it in an effort to make the change in my own life.

I think all of us reflect from time to time on those we would love to have another conversation with that are now gone for us. I think of a friend of mine in Rockland, Maine who lost her dad earlier this year and would give anything to have just one more day with him so she could tell him how much she loved and missed him.

American philosopher and author Wayne Dyer was correct when he coined the phrase, “Go for it now. Tomorrow is promised to no one.” Hopefully we all can take a little more time to enjoy each other, rather than race through life missing all those things we believe we’ll find in the “tomorrows” that may never come about.