To Rent or Not to Rent? 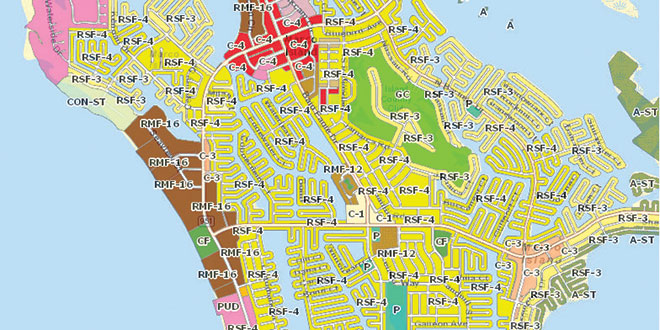 It seems that Marco Island has been mulling over what to do regarding a proposed Rental Ordinance for some time now. Many questions have been raised, and just as many objections to its adoption. I would like to take a cold, hard look at it from a technical point of view. Let’s say, an architect’s point of view.

In my last article, I covered the very complex and broad topic of land use and planning. The article focused on some of the primary guidelines that manage growth, and the built environment of Marco Island. So knowing what we learned, let’s apply some of that information to our current quandary and see how it fits, or doesn’t.

First, let’s ask the important question: “What is the ordinance that is being proposed?” The ordinance referred to as the “Rental Ordinance” was proposed to provide additional regulation to the short term rental of single family homes. A second part of the ordinance also proposed to extend similar regulations to apartment and multi-family properties that also engage in short term rental. However, at its last public hearing in March of 2015, where it was adopted by a City Council majority vote of 5 to 2, the condo provision was removed. The ordinance was then later repealed at a future City Council meeting, or voted to be repealed, or proposed to be considered for repeal, but another ordinance needs to be proposed that will propose to repeal the originally approved ordinance…You know what, I have no idea where this thing stands. Do any of you have any idea? I’m starting to feel a bit like I’m in an Abbott and Costello routine.

So, let me get back to the analysis. The second question we could ask is: “Why is the ordinance being proposed?” I am not sure of the intent, or completely clear if there was any specific event or series of events that prompted the proposal of this ordinance. But, I can speak to why it would make sense to propose such an ordinance, based on what the ordinance attempts to address, which in essence is regulation of “uses” that are incompatible with the intended “uses” allowed within a specific zoning district.

Let’s roll up our sleeves and jump right in, feet first, into this whole thing and how it relates as a “zoning” issue. The code clearly states that the permitted uses in RSF districts (single family homes) are: single family residences, family care facilities (subject to restrictions of the Land Development Code), and parks and open spaces. You also have some additional “accessory” and “conditional” uses that allow child care centers, churches, schools, recreational facilities and others. But these “accessory” and “conditional” uses require a review and approval process.

The primary intent of an RSF property is for it to be used as a single family home. This is where the “use” conflicts come in, when you have the property being used as an income generating property that is being marketed, rented and used for a “transient” use, or in layman’s terms, a hotel, motel or other similar short term, non-permanent rental property. Renting out a single family home for the weekend, for weekly rentals, or even for monthly “vacation” rentals, is in clear opposition to the intended use of the property. In fact, the county defines “transient lodging” as rental and use of residential properties for a period less than 90 contiguous days, with the intent of it being used as the primary residence of the tenant.

So where could one own property that could be used for “transient lodging” use? Well, let’s take a look at 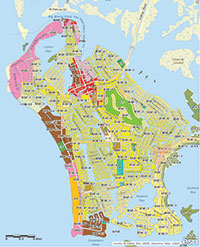 the Land Development Code and see what we can find…

Viola! We have the RT or Residential Tourist District. If we look at the zoning map we find that the only areas on the island designated as RT are a series of properties along the South Collier Boulevard corridor, stretching from Swallow Avenue up to Maple Avenue at the northernmost boundary.

In conclusion, we can see that zoning, land use and deed restrictions all clearly align and support the intent and use of single family properties and forbid their use as temporary short term rental properties.

The bigger question is, dismissing the wisdom of the developers of the island, the land planners, the city staff, and all existing enforceable codes and ordinances, “What kind of community do we want Marco Island to be?” Do we want Marco Island to be a part-time, vacation only, seasonal town? Do we want to promote transient uses in what should be livable, family oriented districts and neighborhoods? Do we want to put the use of single family homes as an investment, income producing possession ahead of building communities?

I know where I stand on the matter regarding all the above questions. And I believe the founders of our city were very clear on this matter as well. So in my “professional” opinion this should be a moot point. All the rules and regulations paint a very clear picture. But unfortunately, this is not a matter of rules and regulations as much as it has become a politically charged issue of people’s pocket books being affected. And all of this is being considered at the expense of encouraging the growth of a vibrant and active livable community.

The irony is that the proposed, approved, retracted, limbo lingering ordinance is not as draconian in its intent as some will lead you to believe. In fact, it does not even go as far as to forbid “transient” uses on properties that clearly, by code, cannot function as such. It only tries to provide regulatory procedures to ensure that if a property is being used as transient that it at least is done in a responsible fashion that ensures the greatest level of safety for the property in question, as well as for its neighboring properties. The proposed ordinance is more than reasonable, but yet, it ping pongs back and forth awaiting a final outcome. So, if you’re still left scratching your head wondering what this all means, I welcome you, as usual, to… “Ask an architect.”

The City of Marco Island Council is scheduled to consider the repeal of the Rental Ordinance on September 21, 2015 at their regularly scheduled meeting, starting at 5:30 PM, at 51 Bald Eagle Drive, Marco Island.