To Catch a Sawfish….Twice in Two Years! 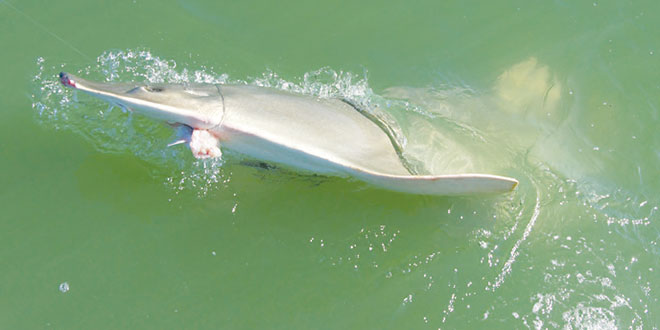 The Sawfish, which had no rostrum (saw), put up a fight for nearly 2 hours.

It’s late winter of 2014 and Captain Ted Naftal gets a call. The voice on the line says “I want to go for something big, something that might hurt us.” Captain Ted replies “There are fish that WILL hurt you, and it’s not funny!” It’s an ongoing joke that the Captain has with regular customers, the Graham family. They’ve been friends for years and have caught some trophy-sized fish together.

The next prize was about to get very big, and unique! On April 25th, 2014, on board the Miss Nancy 2, guests Michael Graham and Jim Goddall joined Capt. Ted to look for some big fish. In recent years, they had already landed several varieties of shark and some huge tarpon. Anchored not too far from the Big Marco Pass, Michael hooked into something and it was huge! At first the consensus among the three was that it might be a large ray, after fighting for 20 minutes. At the 2 hour 30 minute mark they got their first glimpse of the opponent. It was a Smalltooth Sawfish, 16 ft. long and weighing about 600 pounds. After 4 hours and 10 minutes, they finally tired the Sawfish enough that they could remove the hook and release this monster back into its territory. Of the total time to bring the catch to the side of the boat, Michael Graham fought it for 3 ½ hours.

I’ve heard that the odds of catching a Smalltooth Sawfish, especially of this size, is about 500,000 to 1. There’s more to this story.

Fast forward to April 14th, 2015, almost one year later to the day. Capt. Ted is out with Michael Graham again,

and they are looking for a huge hammerhead shark that was seen in the area. Fishing in the same spot as the previous year, and using headless catfish for bait, Michael felt a hard pull on his 40 lb. test line. Hoping it was the hammerhead, he fought ferociously to get a look at his catch. Nearly 2 hours later they got a glimpse, a look at something unknown to them at the time. Capt. Ted took a picture with his phone and forwarded it to a biologist friend for identification. The reply was that they had a Smalltooth Sawfish on the line…with no saw! The sighting was reported, and the sawfish released. Now, if the odds of catching this monster once is 500,000 to 1, I can only imagine what the odds are catching this species two years in a row!

There are only five sawfish species known worldwide, and all are endangered. The Smalltooth Sawfish is the only species found in the waters around Marco Island. Sporting a flattened head and trunk it also has a long, straight, toothed rostrum (in this case known as the saw). They belong to a group of fishes called “elasmobranchs” that include other sharks and rays. They have a skeleton made of cartilage and, even though they swim like sharks, they are members of the ray family because their gills are on the underside of the body, just like other rays.

The rostrum (saw) has between 22 and 29 teeth on each side, and males typically have more teeth than females. If lost completely, the teeth are not replaced. However, if some teeth are just chipped, with the base still intact, they 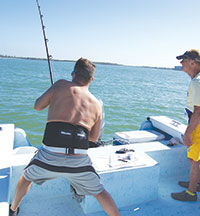 Mike Graham fights a Smalltooth Sawfish on board Miss Nancy 2 this past April.

will grow back. Prior to birth, the teeth are covered with a protective tissue to prevent injury to the mother, which gives live birth.

Although most of the larger Smalltooth Sawfish are found offshore, some have been seen near the shoreline in the spring, when most sawfish are born, and when it is thought that mating occurs. Most of the juvenile sawfish can be found in brackish waters within a mile of land. Their habitats can range from mud bottoms to mangrove shorelines to piers and docks.

In the case of Michael Graham’s second catch, the sawfish with no rostrum, it is thought that males can be combative with each other and that mating season could contribute to fights among these males resulting in the entire rostrum being lost. After all, both the 2014 and 2015 catches took place in April, and birthing season is thought to be primarily in April and May.

No doubt that Mr. Graham will be back on board with Captain Naftal again. If the past actions are a predictor of future events, I look forward to some more fascinating “fish stories” from these anglers!

Captain Ted Naftal and the Miss Nancy 2 depart from the Rose Marina on Marco Island. The Captain can be reached at 239-775-3344.

Bob is the owner of Stepping Stone Ecotours and a Naturalist for The Dolphin Explorer’s dolphin survey team. Bob loves his wife very much!

To report a sawfish sighting,
e-mail the Florida Fish and Wildlife Conservation Commission at sawfish@MyFWC.com or call 941-255-7403.

To file a report of a sawfish sighting or encounter, please include the date and time of the encounter, the location, the estimated length of each sawfish, the water depth and any other relevant details.