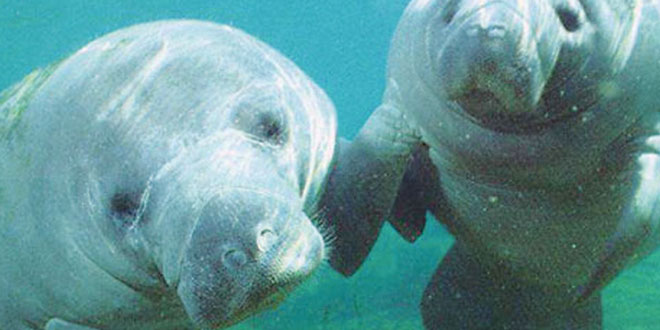 On Wednesday, April 13th at 7 PM join Bob McConville at the Rose Auditorium for a discussion about the sea turtles and manatees found in our area. Meet special guest, Master Naturalist Nancy Anderson, a manatee specialist. MIHS members and MIA students are free. A $5 donation is requested for all others.

Ah, the first day of spring! Thoughts of warmer weather have many of us planning adventurous days at the beach or on the water. Our eyes will scan the surface, looking for anything that might arise from below. All of a sudden there’s a ripple and you know something is there. Glimmering in the sunlight a rounded object begins to emerge. Is it the snout of a manatee? Maybe the head of a sea turtle? Beginning this time of the year it could be either one of these marine animals.

With the arrival of spring we experience the Vernal Equinox. Every second of every day the Earth is tilting just a little bit, and this creates our seasons. Recently, the equator was that point on our planet that was closest to the sun, providing the same amount of solar energy to both the northern and southern hemispheres of our planet. That was the moment of the Vernal Equinox. Over the next few months the northern hemisphere will gain more solar energy, as it is closer to the sun. Our Gulf waters will warm, inviting creatures such as loggerhead sea turtles and manatees to grace our waters.

Sea turtle nesting season is very near. The most prominent of these marine reptiles in the Marco Island area is the loggerhead, although green sea turtles, and even the large leatherback, have been seen here as well.

Some loggerheads will migrate thousands of miles during their life. Miraculously, the female will return to the same vicinity of its birth to lay its own eggs. Unlike some other sea turtles, courtship and mating do not take place near the nesting beach but rather along the migration routes between feeding and breeding grounds. They mate from late March through early June in the northern hemisphere, and nesting season occurs between May and August.

More than 1,500 nests were discovered in Collier County last year, and more than 50,000 nests statewide. People mistakenly compare one year’s data to the previous year. A female laying eggs this season may not return to nest again for two or three years. A female laying eggs this year can potentially create three or four nests in a single season, with an average of 80 to 120 eggs per nest.

An adult female will exit the water, traverse the

beach, and form a “body pit” by scraping away sand. She will then use her hind limbs to create a chamber to deposit the eggs. Once the chamber and body pit are covered with sand she will return to the water and can potentially repeat this process every two to three weeks, up to four times in a season.

The eggs will incubate in the warm sand for 55 to 60 days. Whether these hatchlings are male or female is up to nature. Warmer temperatures in the nest will create females while cooler temps results in males. An easy way to remember this: “hot chicks/cool dudes.”

Now maybe that blip in the water wasn’t a sea turtle. It could have been the snout of a manatee coming up for air!

Once again citing warmer waters, manatees are returning to our area as well. To find them during the winter you don’t have to go very far. A short ride down U.S. 41 to Port of the Islands and you discover their winter home.

Manatees are gentle and slow moving mammals. They divide their time among eating, traveling and resting. Feeding on a variety of aquatic plants and seagrass, they are herbivorous. Since they are mammals they must surface to breathe air and do so, depending on their activity status, every three to 10 minutes.

Like other mammals they have a heart, liver, stomach, kidney and lungs. Their organs and bone structure comprise much of their body weight. So the misconception that this potato shaped animal is just a lazy ball of fat is not so.

They have very little body fat and, when winter waters become too cold, they could be subject to hypothermia. That is why we don’t see them very much when Gulf waters dip below 70 degrees. They have moved to warmer waters until the Gulf temp rises in the spring.

So watch the water over the next several months. Your eyes will scan the surface looking for a ripple. There it is! What’s coming up? A sea turtle? A manatee? The secrets are yours to discover! Enjoy.

BIO: Bob is the owner of Stepping Stone Ecotours and is a naturalist on board the dolphin survey vessel, Dolphin Explorer. He is a member of Florida SEE (Society for Ethical Ecotourism). Bob loves his wife very much!