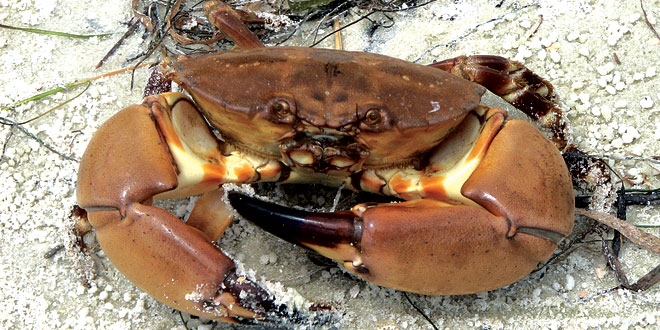 Many live stone crabs have been spottedspending time at Tigertail Lagoon.

Check the calendar! You might have Halloween, Thanksgiving, Christmas, or “season” marked. In our house, the calendar marks October 15 through May 15 every year. This means it’s time to crack some claws and enjoy a tasty meal of the South Florida delicacy – the stone crab. This season got off to a rocky (or should it be called “stony?!) start with some pricing conflicts in Everglades City, the hub of Florida’s commercial stone crab fisheries. But all seems to have adjusted and the catch keeps coming in. Lucky us! Let’s eat!

Florida actually has two species and one “hybrid” of stone crab: the Florida stone crab (Menippe mercenaria), which is found in Southwest Florida from the Florida Keys to about Cedar Key and also along South and North Carolina coasts in the Atlantic Ocean; the gulf stone crab (Mennippe adina), found in northern Gulf of Mexico along the Florida panhandle through Texas; and the “hybrid” stone crab, where the two species interbreed can are found along northern Florida, into the Georgia coast, in the Atlantic Ocean and along the northern panhandle in the Gulf of Mexico.

Both species are harvested, but the local one, the Florida stone crab, once simply a by-catch from Spiny Lobster harvesting in the Keys, has been a stand-alone fishery since the 1960’s, bringing in millions of dollars to the state. It comprises 99 percent of all stone crab landings in the United States.

Found in estuarine and nearshore habitats, the crabs hide in crevices in and beneath rock, shell, sponges and tunicates. Seagrass beds and rocky substrates up to depths of 200 feet are where thrive. They are ecologically important, with their burrows and hiding crevices providing a diversity of marine life species shelter, food and protection. They are also a food source for larger marine species in this ecosystem.

Adult Florida Stone Crabs are tan, sometimes gray, in color with black spots on their smooth or oval carapace, or body. The large

Stone crabs are fished commercially, but an individual may have up to five traps, if properly licensed. PHOTOS PROVIDED BY MYFWC.COM

claws have distinctive black tips – large “crusher claws.” The legs are dark brown with very distinctive white bands. The juveniles are darker and can be deep purple to black with white flecks on the carapace. These are often found in Tigertail Lagoon and are easily confused with “mud” crabs, but the white bands on the legs are the tell-tale characteristic that they are Florida stone crabs. The Tigertail Lagoon and the Rookery Bay estuary around Marco Island are very important habitat for larvae and juvenile Florida stone crab. These areas are the “nursery” grounds for this important species in the ecosystem and state fishery.

They are opportunistic carnivores, using their large, powerful claws, ripping and tearing up prey such as oysters, clams, barnacles, anemones, worms and even other species of crabs. In turn, shark, dolphin, large fish and sea turtle enjoy eating them!

Unlike other crab and lobster species, where the entire animal is taken, only the claw is harvested from this crab making it a very sustainable fishery. Claws must be measured from the elbow to the tip of the claw and be 2 ¾ inches (see diagram). If it is this size or larger, the claw can be taken without injury to the crab. The declawing of the claw is easily performed by snapping off the crab’s arm at the base or connection of the arm to the body. The harvester should firmly hold the two arms of the crab and with a straight downward movement snap the arm off, not tearing or pulling out any muscle or tissue from the body of the crab, at the joint where the leg meets the body.

Snapping it downward, not pulling off and out, does not harm the crab. This non-harmful declawing process allows the crab, in time, to rejuvenate the leg and claw in the next molt; three molts (approximately three years) of an adult crab will grow back the taken claw to the size it was upon harvest. Claws 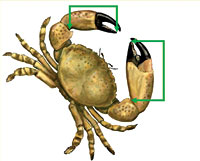 can be taken from both male and female (if no eggs are present) stone crabs. Since the 1960’s, this practice has sustained the approximate same number of landings per season to date.

Commercially, the fishery is regulated from trap to market by the Florida Fish and Wildlife Conservation Commission (www.myfwc.com). Recreationally, if you possess a Florida saltwater recreational fishing license, a maximum of five traps are allowed to catch your own seafood dinner in local waters. The traps, typically wood or plastic, have to have a biodegradable wood panel to minimize by-catch and retrieved manually only during daylight hours. Each trap, unless tied to a dock, must have a buoy attached with the letter “R” (for “recreational”) visible on it and the name and address of the fisherman permanently attached to the trap frame. No traps can obstruct navigation. Bait, such as mullet and fish carcasses and even pigs’ feet, is used to attract the crabs into the traps. (It is very important to note that it is a third degree felony for tampering with someone else’s traps or the content, lines or buoys.)

In the next six months, be Floridian and indulge in a Florida stone crab claw dinner at any legitimate seafood restaurant from the Keys to Everglades City to Tampa. From Marco Island, nothing is better than going by boat through the 10,000 Islands or a drive through the Everglades to the first county seat, Everglade City, for a dozen or so claws for dinner on the Barron River. Or dress it up and head to Truluck’s in Old Naples. My best stone crab dinner ever was a surprise picnic while kayaking with my husband in the Rookery Bay estuary. Fresh, easy, tasty…perfect!