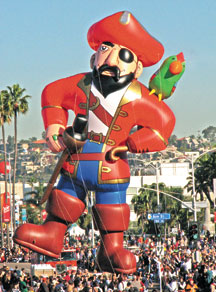 If you follow Rule #3, you will know in advance about special events such as the Holiday Bowl Parade in San Diego. PHOTOS BY VICKIE KELBER/COASTAL BREEZE NEWS

Through the years, we have taken many trips during the holidays. When we worked, we enjoyed getting away for a few days between Christmas and New Years. Now retired, we like to visit other locations either just before or on Christmas to see how they celebrate their holidays. From these experiences, I’ve developed my personal six rules for holiday travel.

Rule #1. Use common sense. When planning the trip, avoid the high travel days by traveling a few days before or after Christmas or New Years. Airlines typically over book at the holidays, so make sure you get to the airport early. Arriving early also allows the airline time to re route you if winter weather is impeding any of your scheduled flights.

Rule #2. No matter how cold you think it is going to be, it will probably be colder. Yes, I expect this when we used to go on ski vacations; you know you are in trouble when they hand you a blanket as you get on the ski lift! However, I’ve encountered this in more moderate climates. During a trip to Charleston, SC, one holiday the city was experiencing “record breaking” (isn’t it always?) cold and all I had was a lined raincoat. Ever since that trip, I pack lots of layers and always include gloves.

Rule #3. Research special holiday events. Most cities have dedicated websites or pages that list holiday activities and events. Early research enables you to purchase tickets ahead of time and avoid being disappointed. Before going to Charleston, I discovered a special evening charity horse and carriage tour, only available at the holidays, that traveled on streets typically not open to such tours. Research about New Orleans revealed the dates for a Mardi Gras type parade and free concerts in St. Louis Cathedral. When we visited San Diego at Christmas time, I was able to purchase tickets for The Poinsettia Bowl as a surprise for my husband as well as grandstand seats for the Holiday Bowl Balloon Parade.

Holiday markets are becoming increasingly popular as part of local holiday traditions. Advance research will alert you to dates and locations. Although I’ve dreamed of visiting Germany’s famed Christmas markets, the temperature that time of year has always dissuaded me. Happily, I have discovered that there are quite a few unique holiday markets that set up shop in New York City; they provide some consolation for missing those along the Rhine.

Many locations offer special holiday house tours. These may be a tour of a series of charming homes specially decorated for the holidays similar to the one offered in Savannah or just one historic home such as “Christmas at Historic Palm Cottage” right here in Naples.

Prior research about special events also 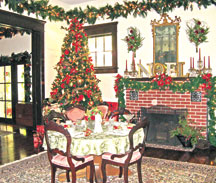 Look for special house tours during the holidays. You need only travel to Naples to see scenes like this one at the Palm Cottage.

Rule #4. Prepare for the unexpected. When planning a holiday trip to New Orleans one year, we booked a hotel that was attached to the Riverwalk Market Place. I thought it would be a convenient place to spend time should there be inclement weather or should it be too cold (see rule #2). Also, the adjacent boardwalk would provide a place for me to take my beloved morning walks. Unfortunately, two weeks before our trip, a freighter crashed into the Riverwalk, causing a portion of the mall and our hotel to collapse. Because engineers needed time to study the underlying structural damage, the ship was still in place when we arrived, supported by tug boats and none of the debris had been removed. The hotel was able to accommodate us in an attached tower with a bird’s eye view of the accident, but the mall and boardwalk remained closed.

I expect snow in ski locations. One Christmas time out west, however, there was so much snow that the roads were impassable and we were confined to our condo for 3 straight days. Thank goodness for canned soup!

Rule #5. Have back up plans. When visiting San Diego one December, I had followed Rule #3 (research) and knew that the zoo was open on Christmas. That is where we planned to spend the day; we would have Christmas “dinner” at one of its restaurants. But, I forgot about Rule #4 (the unexpected). With an average rainfall of less than 12 inches, it rains in San Diego only about 40 days a year. And, of course, Christmas day that year was one of them. Not only did it rain, it poured!

By then, it was too late to get reservations for Christmas dinner even at our hotel. Since I have watched the holiday film, “The Christmas Story” what seems like a thousand times, I knew that there would be a Chinese restaurant open somewhere in the city. This led me to……

Rule #6. Use your smartphone (or similar device). I didn’t yet own a smartphone, but I did have an iPod Touch and the hotel had wifi. Not only was I able to find a Chinese restaurant that was open, I also found an arthouse movie theater that had a special showing of a limited release film we wanted to see. Consulting the city’s transportation website, we were able to find the holiday schedule for buses to get us from dinner to the theater.

Visiting other places during the holidays can bring much pleasure; try to remember my hard learned rules to enhance the experience.