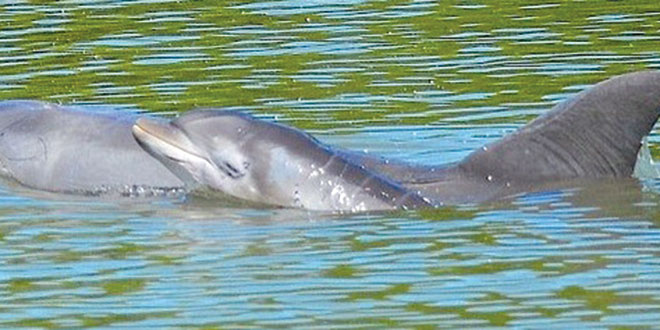 This is the first of three articles this fall about dolphin births, with updates on the new moms and calves.

SEPTEMBER, 2014: Within the next few weeks a naturalist on board the Dolphin Explorer will exclaim to passengers, “Here’s one of the first of this season, a newborn bottlenose dolphin!”

It is birthing season for the bottlenose dolphins in our area. The 10,000 Island Dolphin Survey Team, on board the Dolphin Explorer, will be keeping a sharp lookout for newborns this season and has already made a list of adult females that could possibly be moms this fall. Candidates include Sparky, Sydney, Tess, Victoria, Batman (yes, Batman’s a girl), Tattoo, Darwina, Sparkle, Cosmo, Orange and a few more.

Nine of the 10 mentioned above have already given birth in the past. The 11th female, Orange, is of proper age and physical maturity to be a first time mom. If she does give birth, it will produce the Survey Team’s first known grandmother, Sparky (Orange’s mom).

Although dolphins can give birth any time of the year, the physical setting of warm, shallow waters surrounding our 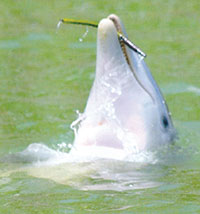 area provides ideal conditions for fall births. All five newborns from 2013 were born in September, October or November. Since a dolphin’s pregnancy term is 12-13 months, this is also mating season. Several large males that are not year-round residents of this area are making an appearance, and, conversely, some males who are generally in the Marco survey area are conspicuously absent, possibly searching for mates in other nearby areas.

The newborn dolphins are a sight to behold. They will weigh between 25-30 pounds at birth. They will be a darker grey than the adult and significantly smaller, since moms can weigh upwards of 400 pounds. The very brand new youngsters will appear to have creases on their skin. These are called “fetal folds,” and occur because of the way the unborn calf is compactly positioned inside mom prior to birth. These folds can remain for several weeks until the baby’s skin fills out from drinking the very rich milk from mom. 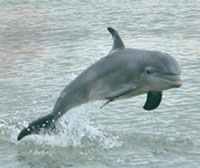 Lama (mom Dolly) takes a giant leap out of the water.

out. These fins will become more rigid in a very short time. When born, the calf comes out tail first. Mom will immediately coax the youngster to the water’s surface to take its first breath. The newborn will breathe once every 3-30 seconds until it gets used to its new lifestyle. If there are other adult females in the area at birth, it is not uncommon for them to help the new mom get the young one to the surface.

The first 30 days of life are critical for both mom and baby. According to researchers affiliated with UCLA, the calf does not sleep during this period. This means mom is awake much of the time as well. In addition to feeding the herself, mom must eat enough to provide nourishment for both of them, increasing her food intake up to 50 percent. She must also watch out for predators. There are sharks in our area, and the calf would be a nice meal so mom is on a constant vigil to protect her little one.

A great example of this is September 2013 newborn 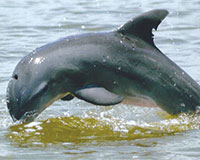 Anji (mom Avery) is easily recognized by the large notch in the dorsal fin. Photo by Kent and Meredith of the Dolphin Explorer

Skipper. Stuck like glue to its mother, Halfway, this young one learned how to survive in Marco Island’s back waters. Just a few months ago, a sighting of the two revealed that Skipper had semi-circular bite marks on its side, a telltale sign of a close encounter with a shark!

It will be interesting over the next several months to see which females give birth. I will continue to update our readers throughout this time with additional articles. If you are just visiting our area right now and want to learn about the new calves you can obtain the information by going online to coastalbreezenews.com, click the “environment” tab and then click “stepping stones” for further articles.

So which females will give birth this fall? Will it be Orange, Sydney, maybe Tess? The team on board The Dolphin Explorer is anxious to let us know! For all of the calves to be born I wish them in advance a healthy, happy birthday!