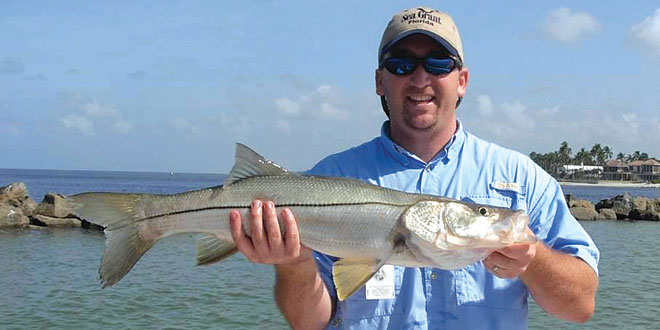 The Florida Snook season opens September 1, 2013 for a limited harvest in both the Gulf of Mexico and Atlantic Ocean state and federal waters. The season closes December 1 in the Gulf (including Monroe County and Everglades National Park) and December 15 in the Atlantic (including Lake Okeechobee and the Kissimmee River).

Most snook caught will be “catch and release” as they won’t fit in the lower and upper size limits, plus just catching this gamefish is fun. It’s important, when a fish is caught, to measure carefully and quickly and then, if necessary, release properly so the fish survives.

Back in 2010, the sustained, very cold to freezing temperatures caused a cold kill of high numbers of the snook population, especially in the Gulf of Mexico stock. Florida Fish and Wildlife Conservation Commission (FWC) reports snook population currently exceed the fishery management goal for this species but population is still rebuilding to the pre-2010 numbers. With this in mind, FWC asks that all snook catch and releases are handled with care to ensure the fish’s survival upon release.

Some easy guidelines for catch and release are: handle caught fish as little as possible and with wet hands to protect the body “slime” that is essential for the fish’s survival; hold the fish horizontally and support the belly and length of fish with both hands for that photo opportunity – don’t hold by gills or jaw; and do not throw fish back in water – gently place it head first, allowing water to move over its gills then release. If the fish is lethargic, move it gently in a figure-eight pattern to allow the fish to oxygenate its gills and acclimate back to the environment. A gentle catch and release is easy and will let the fish live to grow and/or breed for future populations.

A Florida recreational saltwater license and a snook permit are both required to harvest and for catch and release of these fish. Snook can only be caught by hook and line – snagging and spearing is illegal. Remember, it is also illegal to buy or sell snook. As a premier fish of Florida, it is well protected. Once you have caught one, you will know why it’s important that the snook population is protected and sustained for fishing now and in the future.

There are few easy ways a fisherman can help improve management goals and protect the snook population.

• Report catches at the Snook and Gamefish Foundation website at www.SnookFoundation.com. Just click on the “Angler Action” link and fill in the information.

• If you catch a tagged snook, please record tag number, total length, date and location of capture, then report the information to the Angler Tag Return Hotline at 1-800-367-4461 or tagreturn@MyFWC.com.

• Also, fishery researchers are asking anyone who keeps a snook to donate the filleted carcasses to local bait and tackle stores. On Marco Island, the Caxambas Pass Park and Marina (909 South Collier Blvd., Marco Island) and Calusa Island Marina (385 Angler Drive, Goodland) are providing this collection service to anglers. The carcasses will provide important biological data such as size, age, maturity and sex of the snook caught. Carcasses should have internal organs intact for best data collection.

All this above data helps FWC with the stock assessments to further provide science-based decisions on the protection of the snook stock. For more information on snook, other gamefish species or recreational fishing regulations in Florida, go to www.MyFWC.com. To report any violations call 1-888-404-3922 (FWCC).

Get out there and fish!