Time is Winding Down for Shells by Emily 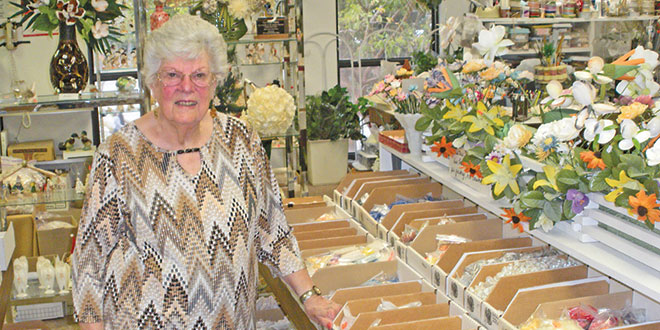 Emily Savage stands in the midst of the seashells, and shell-related novelties, gifts and souvenirs found at her store, Shells by Emily. PHOTO BY DON MANLEY

After more than three decades of being immersed in all things seashell, Emily Savage is poised to close the door forever on her Marco Island gift and souvenir shop, Shells by Emily.

She recently turned 87 and said she now knows that it’s time to move on from working six days a week, 52 weeks a year. “Time has gone on and things have evolved,” said Savage. “I’ve had a wonderful experience, a great journey with this, but now, I’m finding that physically, I just can’t keep up.”

Located upstairs from the office of her well-known, much-loved architect husband Herb, Shells by Emily is an emporium filled with myriad varieties of local and imported seashells, and shell-related novelties, gifts and souvenirs that also offers workshops for those interested in creating crafts with mollusk shells.

“I just feel that I have to rein it in and enjoy what I’ve done and look forward to something different,” Savage added.

She is looking forward to spending more time with her husband of 65 years and the opportunity to do such things as visit with their three children and their families. The Savages have two great-grandsons and they haven’t had a chance to meet the youngest one, who’s about seven months old. “It’ll be fun to just jump in the car and drive to Orlando and visit with them,” she said. “It will be something that we’ll be able to do.”

Shells by Emily will probably remain open until the beginning of May since snowbirds typically remain in this area through the Easter holiday. Until then, there are deep discounts on the store’s extensive inventory. Once the business closes, Savage plans to donate any remaining shells and shell-related items to local schools, Boy and Girl Scout troops and other charitable organizations where they would be put to good use.

Savage said changing interests, especially among young people, have had an impact on the shop. Thanks to the influence of iPads and iPhones and computers, “the young people aren’t as interested in creative arts as they used to be,” she said. “They don’t feel the creative need to create what they want for themselves, they just order it. That has put a damper on our business because we just don’t have enough traffic through here now to keep it going and make it viable for us.”

It’s also become more difficult to find sources for the store’s products, said Savage, citing the fact that the lamp, book and jewelry companies she’s historically done business with have all ceased operations.

She praised the contributions of her staff, especially Judy Daye and Jae Kellogg, and said most have worked at Shells by Emily for 10 or 15, even 20 years.

“The reason for that (longevity) is their honesty, loyalty and our affection for one another,” she said. “We treat each other with great respect. That’s the only way you can run a business. If you don’t value your employees, there’s no way you can survive.”

Not unlike any business owner, Savage has confronted challenges over the years, such as the time a man called asking whether she could repair a mounted sailfish that had lost its fin after falling from its perch.

“I said bring it over,” she said. “It was eight feet long and I thought, ‘It’s a real fish. It was a taxidermied sailfish. When I realized it was real, it made me hesitate; do I dare to try and glue something to this elegant, exquisite piece. I said, ‘If I don’t do it, nobody will.’ It’ll just be damaged. So I got the glue out and did my best. I glued it all very carefully and retouched it with different colors of paints. I got it so that you couldn’t even tell it had been broken.”

Savage is now challenged with determining how she’ll spend her free time once the shop ceases operations.

“I’m just going to take it as it comes because when the store is done, I still have the (display) tables and everything else to deal with,” she said. “I’m not going to take anything with me when I’m done. But I might have a bag of shells at home so that I can make something if I get stir crazy.”