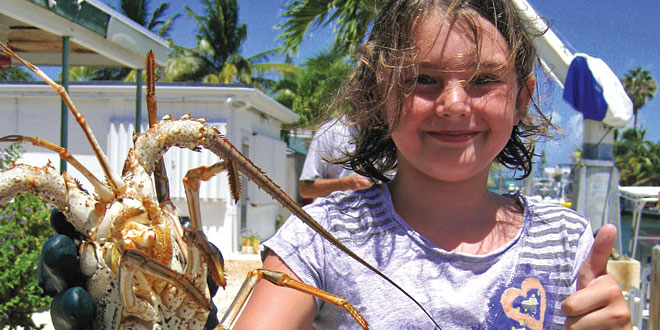 The end of July means that Florida’s Spiny Lobster season is about to open and everyone is running for their snorkel and dive gear. Get your license and lobster stamp paid for and get out there for some delicious eats. Below is some interesting info obtained from the Florida Fish and Wildlife Conservation Commission’s web site at www.MyFWC.com. Be sure to read up on current regulations by logging onto the site for the most up to date season dates and catch limits.

The Caribbean spiny lobster, commonly referred to as the Florida spiny lobster, inhabits tropical and subtropical waters of the Atlantic Ocean, Caribbean Sea, and Gulf of Mexico. Spiny lobsters get their name from the forward-pointing spines that cover their bodies to help protect them from predators. They vary in color from almost white to dark red-orange. Two large, cream-colored spots on the top of the second segment of the tail make spiny lobsters easy to identify. They have long antennae over their eyes that they wave to scare off predators and smaller antennae-like structures called antennules that sense movement and 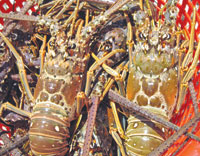 Our Lobster catch of the day.

detect chemicals in the water.

Adult spiny lobsters make their homes in the protected crevices and caverns of coral reefs, sponge flats, and other hard-bottomed areas. The lobsters spawn from March through August and female lobsters carry the bright orange eggs on their undersides until they turn brown and hatch. Larvae can be carried for thousands of miles by currents until they settle in shallow nearshore areas among seagrass and algae beds. They feed on small snails and crabs. The lobsters are solitary until they reach the juvenile stage, when they begin to congregate around protective habitat in nearshore areas. As they begin to mature, spiny lobsters migrate from the nursery areas to offshore reefs.

Lobsters stay in their dens during daylight hours to avoid predators, emerging a couple of hours after dark to forage for food. While lobsters will eat almost anything, their favorite diet consists mostly of snails, clams, crabs, and urchins. The lobsters return to the safety of their dens several hours before sunrise.

The recreational fishery for the spiny lobster begins in July with a two-day sport season. This season is the last consecutive 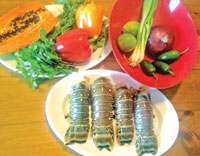 Wednesday and Thursday of July each year. Regular spiny lobster season is August 6 through March 31. For information on spiny lobster regulations during the sport season and the regular season, visit the FWC’s Division of Marine Fisheries Management at myfwc.com/fishing/saltwater/recreational/lobster/

It takes a spiny lobster about two years to grow to the three-inch carapace legal-harvesting size and they can grow as large as 15 pounds. The typical recreational harvest is 1.5 to 2 million pounds between the start of the two-day sport season and Labor Day. The commercial harvest averages 6 million pounds per season, with an average annual value of $20 million. Measured in dollars, the spiny lobster fishery is the largest commercial fishery in Florida.

Here is a tasty Florida Spiny Lobster recipe that we love to make at home….

There are some pretty standard and delicious ways to prepare them including grilling them with my “Captain Rapps’ Marco Rico Caribbean blackening seasoning” being one of my favorites, however it’s hot out and a cool serving of Lobster Ceviche is the “in thing” at our place. The Lobster is briefly poached in hot water for 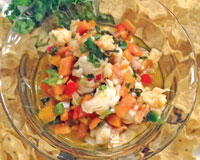 Our lobster Ceviche ready to eat.

this recipe, so those with “Raw-seafood-phobia” can happily rest at ease.

Here is what you will need……..

Remove the meat from your lobster tails and dice into 1” pieces. Drop the diced lobster into a medium pot of boiling water for 30 seconds – remove and strain from water immediately. In a large stainless steel or plastic mixing bowl, combine all of the above ingredients including the lobster and stir well. Cover and set in refrigerator for 3 hours.

Serve in a large bowl, or in individual margarita glasses, with your favorite tortilla chips. This recipe is always a party favorite and you will for sure shock a few people that have never tried Ceviche.