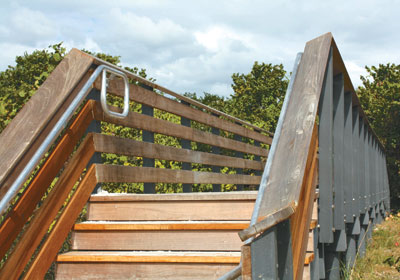 In December of 2011, Collier County announced its plans to update the board¬walks on Tigertail Beach to the tune of $750,000. New bathrooms were also planned at a cost of $100,000. One year later, renovations are still under way, bud¬gets have been changed and the county’s timeline for completion is still somewhat up in the air.

Tourist tax dollars are paying for the update, which includes fixing the existing five boardwalks, adding a dune walkover and a new set of bathrooms. “There was a need to replace the old boardwalks at Tigertail,” said Debbie Roddy, President of the Friends of Tigertail non-profit association. “The pressure-treated wood pilings were so old they had termite damage. The planking, made of recycled plastic, had cracks, nails popping up and became very slippery when wet. The new boardwalks are a significant improvement and very attractive. The construction is considered a ‘green’ project because the wood is sustainably harvested.”

Of the five boardwalks at Tigertail, three have been finished in just the past few weeks. The pilings for the new board¬walks are weather-resistant plastic, rein¬forced with fiberglass rods. The planking and handrails are made from ipe, a Brazilian hardwood, that’s hard wearing and very dense. “They did have some delays due to not being able to get the ipe material for the boardwalks, but were eventually able to find a contractor in North Carolina with the materials. So they were able to complete three of the six board walks,” explained Connie Deane, Community Liaison with Collier County’s Growth Management Division. 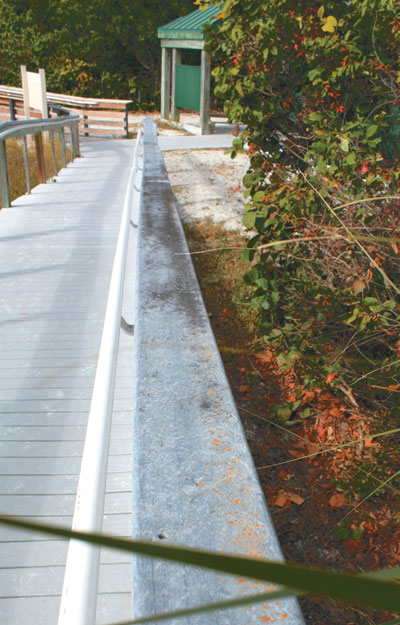 Two more boardwalks are still to be replaced.

“The bathrooms are in the bid process. They expect to have the bids near the end of January. It’s about a six month project so it should be finished up in late summer, early fall.” The original estimate of $100,000 for the bathrooms is now in the ballpark of $500,000. The actual cost will be determined by the bidding process.

“Both the new dune walkover and restrooms are needed,” said Roddy. “The walkover allows visitors quicker access to the Gulf of Mexico. It will take visitors at Tigertail about the same amount of time to get to the Gulf as those coming in at South Beach. The addition of new restrooms provides visitors a more convenient location than the other Tigertail restrooms.”

A portion of the parking lot is closed for staging purposes, but will reopen when the project is complete.

Many visitors and locals enjoy witnessing the myriad wildlife which utilize Tigertail Beach. Touted as one of the best birding sites in Southwest Florida, some of the many species of birds include Wilson’s, piping and snowy plovers, least terns, roseate spoonbills, red knots, osprey, falcons, bald eagles and pelicans. Many of these birds use Tigertail and nearby Sand Dollar Beach as a destination during the migration season.

Tigertail Beach also features a snack bar serving breakfast and lunch, beach rentals, barbecue areas with picnic tables, a playground and a butterfly garden. Parking is $8 or free with a Collier County resident beach parking sticker. Located off of Hernando Drive, Tigertail is open from 8:00 AM until sundown.