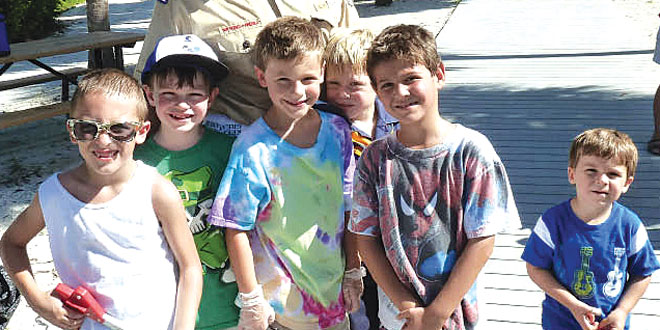 On the morning of Saturday September 21, Tigertail Beach goers volunteered in record numbers to help clean up Tigertail Beach as part of the 28th International Annual Coastal Cleanup.

The Friends of Tigertail Beach volunteer organization teamed up again with Keep Collier Beautiful, and a record number of 108 volunteers joined in to help rid Tigertail Beach of the empty bottles, cans, 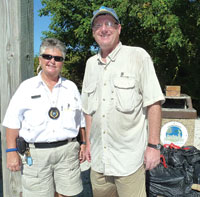 Park ranger Carol Buckler and Collier Dir. of Parks and Rec. Barry Williams joined in the clean up.

foam cups, cigarette butts, plastic bags and other trash that summer visitors left behind. More than 20 bags of trash were collected.

Those who volunteered to work alongside the Friends Of Tigertail hosts included Boy Scout Troops 117 and 234, Girl Scout Troops 467 and 873, Cub Scout Packs 234 and 325, their parents and scout masters, along with many residents of Marco, including

Three of the volunteers from the Friends of Tigertail Beach. 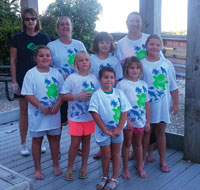 These volunteers earned their t-shirts!

youth volunteers were given a certificate for participating, and there were 45 given out in all!

Keep Collier Beautiful provided the garbage bags, gloves, bottled water and commemorative t-shirts, which were handed out by the Friends of Tigertail.

All the volunteers cooperated in tallying what they picked up, so that the totals could be forwarded to The Ocean Conservancy. This information is used to update 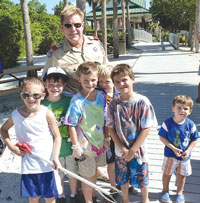 One of the local Cub Scout packs that helped clean up Tigertail! SUBMITTED PHOTOS

the data base which The Ocean Conservancy uses in gauging how effective these worldwide drives are in keeping our beaches clean.

The Friends of Tigertail organization was delighted with this great volunteer turnout, and invites everyone to come to the next quarterly beach cleanup on Tigertail Beach! It is scheduled for Saturday, December 7, from 8 AM to noon.

Visit www.FriendsofTigertail.com for the schedule of all of its upcoming events.