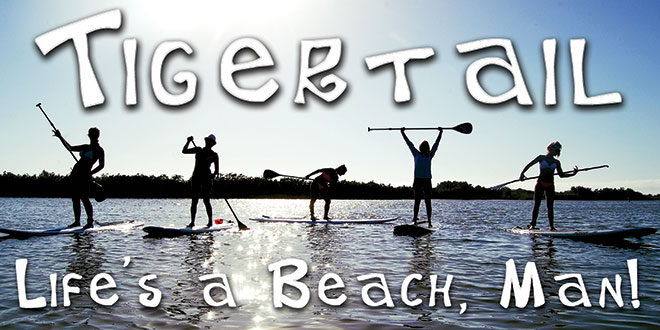 “It was the lowest point in my life,” laments Tony Smith (smiling). “I applied for a dishwasher position at the Pewter Mug here on Marco and was turned down. Try telling that to your girlfriend. Man, it was tough!”

Luckily, it turned out to be a serendipitous moment for all of us.

Tony Smith is the person who now runs the show at Tigertail Beach. But it didn’t start out that way. He played a lot of tennis as a kid and parlayed that into a gig at the Hilton as an interim Tennis Pro.

“While I was doing that, I kept peering down the beach thinking, man, that’s where I want to be.” When the Hilton hired a full-time pro, I went into partnership with the guy at Tigertail in 1988. Soon after that, he wanted to get out of the business entirely and rather than spend a small fortune on legal fees to dissolve the corporation, I offered to buy the company for a dollar.” The paper’s were signed the next day and Tony took over.

Above, this photo of the Hut from 1995 shows how much the landscape has changed over the years at Tigertail. The hut, below, has changed too. SUBMITTED PHOTOS UNLESS NOTED

a Brit (which means he’s from England) and his native brogue never faded. I tried typing his quotes the way they sound and the auto-correct burned out on my computer.

For the first five years at Tigertail, Tony worked without any employees. The operation was in major disrepair when he took over and he used all the revenue to get things up to speed.

“It was tough actually, very tough,” says Tony. “But having gone from being an infantry soldier, and in many hostile environments, to working on a beach in Florida, I was loving every minute of it.”

Many celebrities have visited Tigertail over the years. Gina Davis has been a visitor and her kids played on the beach with Tony’ kids. Tony even sat next to Tom Cruise’s mother at a wedding. “She’s a hoot,” laughs Tony. “Great person.” But while celebrities are idolized by so many, Tony’s real heroes are the Veterans. Tony served in The Inkerman Company (Grenadier Guards) as Team Commander. Veterans hold a special place in his 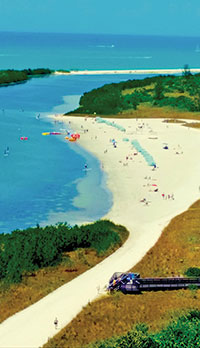 heart and he honors their service every chance he gets when they visit Tigertail Beach.

Tony has an amazing wife (his words) and three great kids (also his words). His wife, Martina, an Italian from south Philadelphia, runs the concession stand. I told you that so I could tell you this; the food is wonderful. Now that I have had a chance to sample the fare at Tigertail, it is on my list of regular places to dine. Solid burgers, fresh ingredients, outdoor seating and some friendly faces behind the counter are all part of the perfect beach experience. It made me miss the drive-ins that were such a wonderful part of Americana. It’s great to see Tony and his crew perpetuate that culture.

Reminiscent of the beach party movies in the 1960s, Tigertail is as close as you can come to that true beach scene while still adhering to local, state and federal laws. While you won’t find Frankie Avalon and Annette Funicello tearing up the sand to “Swingin’ and Surfin’”, you will find Tony and his guitar part 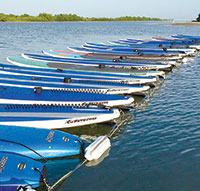 Tigertail is THE place to paddle board and Tony makes sure all the gear is top of the line.

of many impromptu jam sessions down at the hut.

From sunup to sundown, Tigertail displays a bounty of moods. Tony gives full credit to Mother Nature for those displays, and he certainly knows how to help people enjoy them. One of the most popular ways is with a paddle board. They are all the rage and every age group is getting in on the action. The equipment at Tigertail is top of the line. They offer free lessons with every paddle board rental, dry boxes and more to make every experience fun and adventurous.

“We’ve had paddle boards here for twenty years,” says Tony. “A father-son team from Michigan dropped off two of them a long time ago. We had them a couple of months, rented them a few times and eventually sawed them up and tossed ’em out. Who knew it was going to just take-off like it has?”

So many people, including celebrities, sports stars and millionaires from around the globe, have commented to Tony “Man, you got the life here, you’re a lucky guy.” But only once did

Tony disagree with them. That was when a race car driver came to visit. Tony loves motor sports.

Tigertail is a family place and hosts many group activities for kids of all ages. Throw a stone into a group of a thousand people, and you would be hard pressed to hit someone who wouldn’t enjoy Tigertail. Tony and his crew are tireless in their efforts to accommodate everyone who wants to enjoy a true beach experience. If you have a question – Ask! If you need something – Ask! Have a problem – Ask! You get the idea. They are there to make it a perfect day on the beach.

Tony is looking to add a beach party luau to the activities next season. He is continually looking to enhance the menu offerings. It is a wide open place to make of it what you will. This is where you should stop reading this story and head to Tigertail to create your own story. Tony, his family, and his entire crew will always be there to help you write it.