Three Planets with One Glance 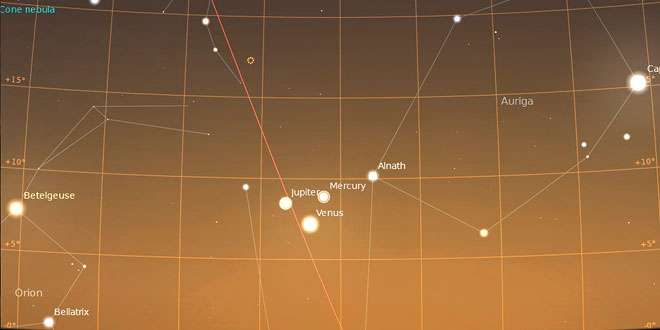 There are several dog constellations in tTonight we have a rare visual treat! We have not two, but three planets in conjunction, Venus, Jupiter and Mercury. Technically, a pair of planets are in conjunction when they share the same right ascension, the celestial equivalent of longitude, but the word is commonly used whenever planets make a close pass.

In this case, Jupiter has been moving towards the western horizon for some time now. Earlier this month Venus appeared very low in the west and has been rising a little higher each evening as Jupiter sinks. About the 19th Venus was joined by Mercury which seems to be racing to catch up to its brighter cousin. Mercury will brush past Venus on the 24th and pass Jupiter two days later on the 26th.

At this point Jupiter, Venus and Mercury will be within 5 degrees of each other; all three planets may then be viewed within the same field of view of a pair of binoculars. Naked eye stargazers should have no problem spotting the planets if they wait until about a half hour after sunset. Venus is much the

brightest of the three, shining with a pearly light at magnitude -3.8. Mercury is rather fainter at -0.69, but still brighter than any star in this evening sky except Sirius. Jupiter is of intermediate brightness, -1.77. The biggest problem with observing this conjunction will not be the bright twilight, but clouds. Our rainy season is approaching!

The planets of course are not really very close to each other, they merely appear that way due to our line of sight. Jupiter is well over 400 million miles from Venus for example and even further from Mercury.

After the 26th Mercury shoots by Jupiter on it’s way to greatest eastward elongation in mid June while Venus does a close pass by Jupiter on the 28th of May being only one degree away at its closest point. Venus will remain our evening star for the rest of the year. Jupiter will continue sinking into the west until it slides behind the Sun and pops out in our morning sky in a few weeks.