“Those who cannot remember the past are condemned to repeat it…” 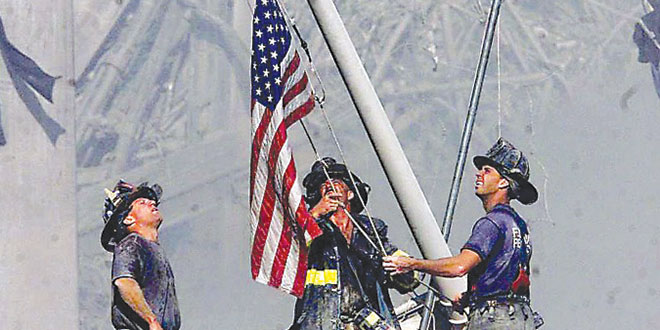 As stated in his work, “The Life of Reason; Reason in Common Sense,” American philosopher George Santayana wrote “Those who cannot remember the past are condemned to repeat it.”

Unfortunately, many of our fellow citizens fall into this category. Fourteen years after the largest and most deadly attack on America, there are those who still argue that the attack was an insider job, the twin towers were destroyed and 3,000 fellow Americans were murdered in cold blood by some secret, undercover service of the United States. Before I go any further in this article, on the fourteenth anniversary of the attacks, I would like to call those people dumb, stupid, ignorant and traitorous. And you don’t want to hear what I really think about them!

As proud and patriotic Americans, we should never forget what happened on September 11, 2001. I made a promise to myself that I will write a story on each and every anniversary of the terrible event, reminding this cowardly attack to my fellow Americans until the day I leave this Earth.

Some elements in our country love to rewrite history, and depend on generations to slowly forget the truth and believe in the rewritten versions of history. Let us remember that Nazi Germany sent millions of Jews to their deaths in concentration camps

Survivors of the 9/11 attack on the World Trade Center, covered in ash.

only because they were Jews; forces of the fascist empire of Japan with the blessings of their Emperor attacked Pearl Harbor and killed thousands of American military personnel, destroying most of our Navy. America had to use nuclear weapons to finally stop the advances of the Japanese military in the Pacific, and in turn, saved millions of American lives.

Believe it or not, there are now those who are trying to dispute the facts of Hiroshima and Nagasaki and claim the nukes did not save the lives of American military personnel, as well as other inhabitants of a number of Pacific nations.

On this fourteenth anniversary of the dastardly attacks on the United States of America, let us pause and remember what happened on that day, keeping in mind that there is a whole new generation of Americans who are now fourteen years old, with their iPads and iPhones in hand, earbuds and earphones firmly planted in their ears, who will tell you that history is a boring subject – even as they would have trouble telling you who fought whom during the Civil War and for what reason, and could not find their hometown on a large map of the United States if their lives depended on it; and who are now attending middle school and being

Mourner at the 9/11 Memorial. SUBMITTED PHOTOS

duly influenced by their teachers, in most cases who are the re-writers of history based on their biases.

On September 11, 2001, at 8:45 AM, on a clear Tuesday morning, an American Airlines Boeing 767 loaded with 20,000 gallons of jet fuel crashed into the north tower of the World Trade Center in New York City. The impact instantly killed hundreds of people and trapped hundreds more in higher floors. Who can forget the sight of those poor souls whose only crime that day was to show up for work, jumping out of windows above the 80th floor? Eighteen minutes after the first plane hit the north tower, a second Boeing 767 slammed into the south tower near the 60th floor.

For the first time in history, mainland America was under attack. And the attackers were no other than the Islamic Jihadist terrorists, blind followers of Osama bin Laden and a corrupted seventh century version of an otherwise benign religion, who learned how to fly airplanes right here in Southwest Florida. Once again, proving my theory that we are always our own worst enemy.

Have we learned anything from the tragic events of fourteen years ago?

We went to war in Afghanistan and Iraq, chased down the terrorists who were responsible for the attacks; achieved the impossible by finding and disposing

of world’s greatest scum-bag Osama bin Laden, along with many other haters of America and everything she stands for, and in the process lost thousands of patriotic young men and women and left thousands more maimed for life. Our victories in the war zone were stolen away from us by our own government and so-called political leaders. We left Iraq and Afghanistan before we could declare an ultimate victory, and perhaps, change the course of history.

So what have we learned from this experience?

Just like we did in Korea and Vietnam, we chose to snatch defeat from the jaws of victory in Iraq and Afghanistan! Now we are facing the same enemy in Syria we previously faced, and clearly defeated in the battlefields of Iraq and Afghanistan, fighting us under a different banner but same religious ideology. While the Islamic State is growing like an incurable cancer in the Middle East, we are arguing whether to call them Islamic terrorists or just terrorists.

To some, September 11 may seem like a series of unwanted events they are trying to erase from their memory cells. It may seem like a bad dream they had after an exceptionally trying day or a rather large meal late at night. The images may be fading, the extreme feelings of disgust and anxiety

of the days after 9/11 may no longer be with them.

However, on this fourteenth anniversary of the attack on America, I want to make sure we all remember what happened. I want everyone to tell their children what happened on that day. And I hope and pray that we as a nation never forget and always be vigilant. That is a lesson learned in history. The people who don’t like us are still out there, and some of them are even here, amongst us.

We must make sure it never happens again!

And to those who try to re-write this sad page in our nation’s history, a message from me and my friends: “you will always find me and others like me facing you armed with the only weapon we need; the truth. So, beware.”

Please say a prayer for those who lost their lives on 9/11, all the brave men and women who died or were injured in Iraq and Afghanistan protecting and preserving our freedoms, and for those who still believe this is the greatest nation in the history of the world.