This Place Is For The Birds! 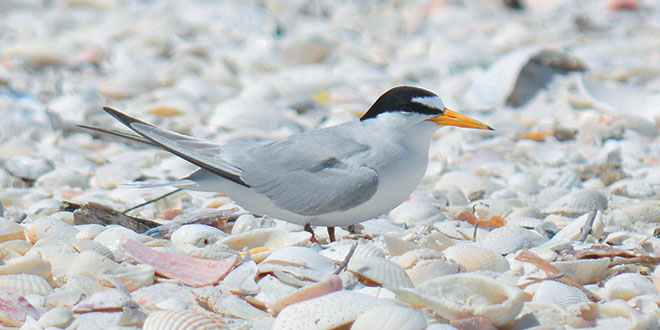 Join Bob on July 20th at 7 PM for more details about some of our area birds. This talk will take place at the Marco Island Historical Society’s Auditorium. On May 12th Bob gave a presentation about our birdlife and it was so well received that Part 2 was requested. Admission is free for all MIHS members and MIA students and teachers. A $5 donation is requested of all others.

Look!!! Up in the sky…again!!! I contributed an article in early May and discussed some of the birds we see here, namely the White Pelican, the Peregrine Falcon, the Swallow Tailed Kite and the Limpkin. There were many requests for additional information so let’s talk about some more of our feathered friends.

One of the most colorful birds nesting in our area at this time is the Black Skimmer. There are only three species of Skimmers around the world: one in Africa, in India and here in the U.S. One thing very unique about this bird is that the lower portion of its bill is longer than the upper half…the only bird in the country to claim this status. They will use this lower bill to “skim” across the waters in search of small fish. Once the prey is felt on the bill the head will tilt forward and the upper bill will trap the fish, providing a nice meal.

The Black Skimmer is very striking in coloration. They are black on the back and white on the underside. The unique bill will be red or orange and black at the tip. They are about the size of a crow, weighing from 8 to 15 ounces.

Many are breeding and nesting on the north end of Marco Island at this time and they nest in colonies. Both the male and female will incubate an average of three to five eggs for about 24 days. The parents will guard the hatchlings for about four weeks, when the youngsters are ready to fly

A Black Skimmer searches for its next meal by “skimming” along the water surface.

and fend for themselves.

Right alongside of the Skimmers it is very common to find another beach nester, the Least Tern. These are the smallest of the North American Terns (that’s how they get their name “Least”) and they only weigh about four to six ounces. They too nest along the sandy shorelines which provide great camouflage. The eggs are about the same color as the sand and when the young are hatched they are also that same color. This could be a key factor that contributes to other flying predators from locating them. The Least Tern will raise its young in our area and return to South America in the Fall, returning again next Spring to repeat this life cycle.

Our national symbol, the Bald Eagle also calls Marco Island home and two have been nesting on Tigertail Court for several years. Parents Calusa and Paleo currently have a young one in the nest which should be mature enough to fly at this time. The adult female will be larger than the male by about 30 percent. This nesting pair are excellent fishers and have been seen frequently at Tigertail Lagoon and surrounding waterways gathering their daily meals.

There are so many other year-round and migrating birds that grace our skies and shorelines that it would take a book to discuss them all.

I invite you to join me on July 20th at the Rose Auditorium, 7 PM, when I will discuss more about our feathered friends. Until then, keep an eye on the sky!

Bob is the owner of Stepping Stone Ecotours and is also a Naturalist for a local dolphin survey team. He is a member of Florida SEE (Society for Ethical Ecotourism).  Bob loves his wife very much!!!