This Judge Has a Big Heart – And So Does Her Bailiff: Danny’s Day in Court 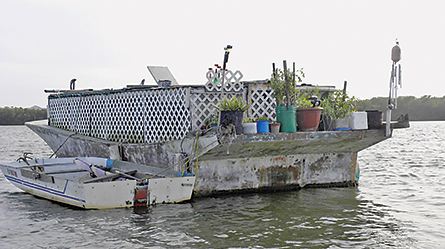 Photo by Cassandra Gwinn: At the back of Danny’s boat are herbs, tomatoes, and a young mango tree (his favorite). The white box (right) is filled with mango seedlings, which Danny will plant ashore. The two pipes sticking up are solar powered range lights to mark the position at night (2015).

Danny Mootispaw, 60, has been living in and around Goodland for most of his adult life. For the last four months, I have been interviewing him for the purpose of telling his life’s story, which will appear in subsequent editions. Since 1992, Danny has lived on a hulk, anchored near the Goodland Bridge. Danny minds his own business, and is largely invisible except when he rows ashore and emerges from the mangroves to get his mail at the post office or rides his bicycle up to Marco to use the computer at the library. “He’s a ghost,” one resident exclaims, “But he’s a real person at the same time.” Out of sight, out of mind, seems to suit most of us here. Put off by his unkempt appearance, people give him a wide birth. Some have cursed at him as he passes, but otherwise don’t speak to him. Danny sports a long beard, braided hair, and clothing which can only be described as vintage beach bum. Due to widespread identity theft, his social security has been invalidated. He is unable to get a driver’s license or even a Florida identification card for the same reason. As far as government is concerned, Danny doesn’t exist.

In 2002, Danny, then employed as a locksmith, bought an old 32-foot fiberglass boat without an engine. He paid $650 for it and has lived on it ever since, modifying it as necessary, and once defending it against armed attackers. In February 2016, Danny successfully defended his right to live there in the U.S. Federal District Court in Ft. Myers, riding his bike up to Ft. Myers to do so. It took him two days to get to Ft. Myers, sleeping in wooded lots along the way. Danny tells me that due to confusion as to who he really was, no injunction was issued by the federal judge. “They didn’t know what to do with it,” said Danny, “The prosecutor said they were no longer going to pursue it.” Danny has pretty much lost control of his life. The one thing he can count on 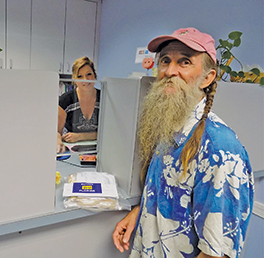 Photo by Barry Gwinn: Danny, a smile under there somewhere, poses with his new boat registration.Watery eyes came later.

is the decaying hulk, which he calls home. He will not give it up without a fight. Starting on July 25, 2016, a fight is what he got.

On that date, Collier County Deputy Sheriff Shawn Bogart and another deputy pulled up alongside Danny’s boat and asked to see his boat registration. “I told them I didn’t need registration,” said Danny, “I showed them a county property tax bill and explained that the county tax collector carries this on the tax rolls as a home. I told them that because it is worth less than $300, no taxes are due on it.” He further told them that because it was a “non-motorized vessel” it needed no registration. There must have been a lot of head scratching by the deputies. At any rate they motored off without further ado, coming back about an hour later to take pictures of Danny’s boat. Later, they came back a third time and slapped Danny with a summons, giving him 30 days to pay a $73 dollar fine and charging him with failure to renew his boat registration. I wished I could have been a fly on the wall when the county was trying to figure out how to handle this. Having no identity, income, or money squirreled away, Danny anxiously awaited developments. They came in the mail a couple weeks later, with a notice to appear on August 25, 2016 before County Judge Janeice Martin in Naples. In view of what happened next, I doubt that Judge Martin will ever forget this case, nor will she try to.

On the afternoon of August 25, Danny reported to Judge Martin’s courtroom and was given a chance to defend himself. He had ridden over earlier on his bicycle in 90-degree heat. As Danny told me later, his defense was the same as that given to Deputy Bogart, who was also present in court. According to Danny, Judge Martin wasn’t buying any of it. In a well-reasoned opinion, the judge, sidestepping the property tax issue, ruled that Danny must renew the vessel’s registration within 30 days or face a possible 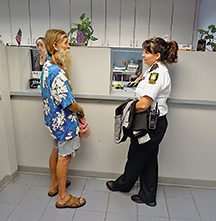 additional citation. Danny had discontinued registering the boat two years before; the fact that he had no money was decisive. It must have been a long, hot, depressing bike ride back to Goodland for Danny. He still had a lot of fight in him though. He felt he had been wronged in court and resolved to appeal Judge Martin’s ruling. Using his only link to the internet, Danny rode up to the Marco library and googled the appeal process. He printed out the form and mailed it in. Shortly thereafter he received notice in the mail that his “Motion for Reconsideration” had been set for October 6th.

I knew none of this until I caught up to Danny on October 4th. He was terrified (his words) and felt that he might soon lose his home. He had already started moving his fruit and herb plants off the boat and was making plans to live on one of the 10,000 Islands. He had nowhere else to go and was close to complete despair. Danny tends to ramble when trying to make a point and felt he had done poorly in Judge Martin’s court. He has a photographic memory and hates to leave anything out. “I was the only one in the courtroom [aside from the judge’s staff],” said Danny. “I felt alone and not up to it.” I resolved to drive Danny over for the October 6 hearing, and speak up for him in the courtroom. There were two parking ticket cases before us that afternoon, both of which Judge Martin dismissed after hearing the aggrieved parties and commending the ticketing officers. When Danny’s case was called, I was received courteously by Judge Martin and said my piece. Judge Martin took pains to convince me that the law required Danny to renew his boat registration. I had to agree with her. The judge affirmed her earlier ruling that Danny must pay up. She correctly said that the law just did not support his position. “I have spent hours on this case with Deputy [Shawn] Bogart, trying to figure out some way to get 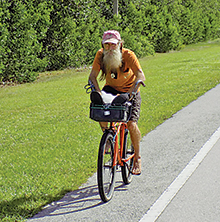 Danny on his bike, which was given to him by a caringGoodland resident, and is his only mobile land transportation.He often bikes to Naples to visit his mother, andto straighten things out with Collier County.

around the law here,” said the judge, “We could not come up with one.” In addition to her five page opinion, Judge Martin took the trouble to write Danny a letter explaining her reasons for ruling against him. Now the Judge was clearly dismayed at the way things had turned out for Danny. “I have been concerned about [Danny’s] safety in getting over here on his bike,” the judge added. The judge had one more thing to say before we left the courtroom. “I want you to go over to the tax collector’s office next door,” she said, addressing Danny, “When you get there, ask for (Here she named an official) and tell him I sent you.” As we were leaving the courtroom one of her bailiffs approached us and said she would meet us at the tax collector’s office. The bailiff, Jane Elfer, had just been assigned to Judge Martin’s courtroom and was also moved by Danny’s plight. Elfer stood by Danny, as Missy, the clerk struggled to make sense of Danny’s situation. It was a daunting scenario, but in less than 15 minutes, after many twists and turns, Missy presented Danny with his 2016 boat registration. By this time the whole office was abuzz with what was going on at Missy’s window. At that moment, Elfer slid her personal credit card across the counter in payment of the $123.50 registration fee. “[While listening to Danny’s case], a voice told me that I had to do this,” said Elfer. After it sunk in, tears welled up in Danny’s eyes. He couldn’t believe that he had been treated so humanely, and with such respect. Judge Martin had just presided over one of the best days Danny has had in a long time. Bailiff Elfer sealed it with an unselfish act of compassion. It is another reason why I love living in Collier County.