This is not going to stay in Vegas 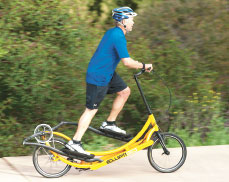 Well I did it, I broke down and headed to Vegas. I know what you’re thinking; poor guy had to go to Vegas. Actually, my trip was not about hanging at the Palms, I did do that, or seeing elaborate shows. I did take in the Elvis Cirque de Soleil show, I mean how could I not, he is the king after all, but in all actuality my main objective for going to “Lost Wages” (as the Southwest pilot called it) was to attend our industry’s yearly show, called “interbike” and what a show it was.

Besides meeting current cycling greats, George Hincapie, Chris Horner and meeting up again with industry icons like Richard Schwinn, the show exhibited some of the year’s top new products and also upgrades to current products, like new elaborate bicycle designs and colors all the way down to higher intensity bicycle lights. It looks to be a great year for bicycling. There were new elliptical style bicycles, where you pedal the bicycle like you would a stationary elliptical machine in order to propel yourself, also some nice new bicycle mounts for your smart phone. One of the neatest products I saw up close and have only read about were the belt driven bicycles. No more greasy chains, they are a little bit pricey at the moment, but as with anything, give it time.

A lot of people are somewhat amazed when I mention that the new “model” year bicycles will be out soon. Yes, much like automobiles, bicycles have model years as well. Most of the time the changes are not really too significant. Manufacturers may just change colors or make minor upgrades in the components; shifters or derailleurs.

As much as the modern “safety bicycle”(crank and pedals attached with chain to power the rear wheel), has not changed since John Kemp Starley built it in 1885, a lot of other technologies have changed with the bicycle and still change every year. We always think of the bicycle as a simple machine, and 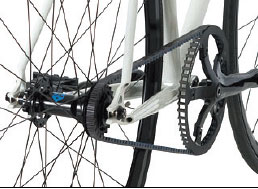 as it sits it really is. The fact that this simple machine can go through so many engineering, mechanical and design changes, some subtle and some totally dramatic, but still basically remain the same is what makes it so amazing to me.

I think the biggest change with bicycles over the years is with the materials used to build them. Bicycles have advanced from the original super heavy gauge steel frames to the lighter weight carbon, titanium, aluminum, and even bamboo frames in use today. There are some steel frame bicycles made currently that are even as lightweight as those carbon frames; it all boils down to the quality steel used and the engineering design of the tubing.

But to me, the most significant change as of late, that has happened to the bicycle was in 2003, when a company called Electra, designed and recently won the patent for their “flat foot technology”. It is a design where the rider sits on the bicycle with his feet flat on the ground, but the leg is forward to get the proper leg extension. Essentially the pedals are moved forward about 8 inches, more or less a semi-recumbent style bicycle. This design allows people to feel more comfortable as they sit upright and always feel safe, as they know their feet will always be touching the ground flat. Many other companies have since made similar designs to the Electra patent. As with everything, some are real good and others, not so much.

So if you are in the market for a new bicycle this year or you just want to try this new style, stop by your local independent bicycle dealer and ask to try this new forward pedaling design, but caution: you may find yourself forgetting where your car keys are!