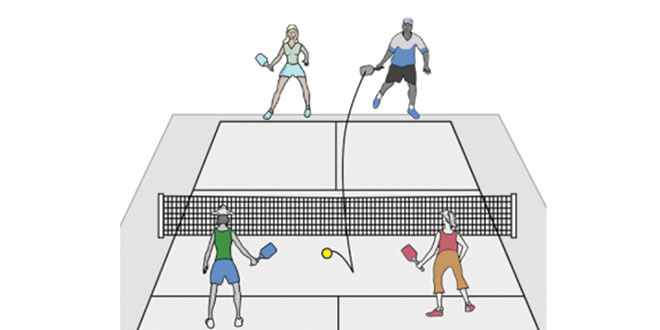 In my upcoming and ongoing articles related to pickleball, I will be covering many aspects of the fundamentals and strategies of this great game. As an instructor, most of the players I deal with at the Racquet Center are at a beginner to intermediate level of play, and my articles will be directed at this level of player’s abilities.

Today, I am going to address a basic required strategy, which is vital to becoming a better pickleball player. However, execution of the shot itself does require some advanced level skills, and more importantly, a lot of practice!

As in any sport, even though I may not have the physical talent to play on a level that the pro’s do, with proper understanding and execution of the strategies they use, I can improve my game, simply from making wise strategical choices.

In the sport of pickleball, one of the most important and basic strategies is called the “Third Shot Opportunity.” Once a player has properly learned the fundamentals of pickleball and has reached a point in their game where they are beginning to score points with winning shots instead of unforced errors, it is now time to begin to focus on advanced level strategies.

Let’s first confirm that to be able to efficiently execute and utilize third shot opportunity, our abilities as a pickleball player now allow us to create a situation where the serve and return of serve shots have efficiently been kept in the court. Because of this ability, all players have been prevented from approaching the kitchen on the first two shots. At this level of play, since each team has had its designated bounce, all players should now be attempting to get to the kitchen.

This is where the third shot opportunity strategy comes into play.

However, before we go any further with this, let’s understand that it may not necessarily always be the third shot where this opportunity presents itself. Remember, in proper pickleball strategy, while we are all attempting to get to the kitchen, at the same time we are all trying to prevent each other from getting to the kitchen! So because of this, it may actually be the fourth, fifth or more shot.

Ok, let’s discuss the main purpose of the third ball opportunity. The purpose is that we are attempting to take control of the seven-foot, no volley zone, also known as, the kitchen. Once we have control of the kitchen, we can now, by utilizing our dinking skills, create the opportunity to set up a put away winner!

Now let’s consider our options of choice of shot for third ball.

Many beginner and intermediate players think they should hit the ball as hard as they can, so that the other team will not be able to handle it and they will win the point with this power shot. Unfortunately, as I see players attempt this strategy, it is at best a 50-50% shot! They tend to over-hit the ball and their shot goes out, either long or wide.

Remember, in proper pickleball strategy, most points are won at the net, not from the baseline. Hitting the ball hard from the baseline or mid court may work sometimes, if you are playing against a new or lower level player. However, if you are playing against advanced level players, they will simply just put their paddle up and block the ball at an angle away from you, or directly at your feet. This will either now make it even more difficult for you and your partner to be able to work your way to the net, or even worse, be an outright winner and you lose the point!

So banging the ball as hard as you can from the baseline or mid court, is low percentage and not really a great selection of a shot to get you and your partner to the kitchen.

The lob shot is a difficult shot to master and becomes even more difficult in outdoor play because you have to judge the wind. A lob hit from the baseline has to be hit so precisely for it to be effective that it is almost not worth trying. In higher levels of pickleball, most lobs actually take place from the kitchen and are utilized as an offensive surprise attack style of a shot, which should end up being a winner. However, if you find yourself in a position where a defensive lob may be your only strategical choice of shots, you should be aiming it to force one of your opponents to have to execute a backhand overhead.

The soft dink shot is a looping, softly hit ball that just makes it over the net and lands midway in the kitchen. It sometimes must be executed as a groundstroke, or as a traditional half volley style dink, or as a blending of both. It is sometimes required to be hit from the baseline, and sometimes from various locations in the mid court. It is a very challenging shot to be proficient at and requires proper instruction and training, as well as a lot of practice to conquer. As a higher level player, you need to have the confidence to utilize it in a competitive situation.

With that all said, as challenging as it is, the soft dink shot is the best choice for your third shot.

The most important concept to understand is that we are trying to take pace off of the ball and bring our opponents into the kitchen to hit their next shot. In addition to this, we are attempting to pull them out of position and to out dink them. This strategy will hopefully force them to pop the ball up. Then either ourselves, or our partner, have the opportunity for the spike put away shot…Yes! That felt good!

In order to become proficient at the soft dink shot we must first accept the fact that these are not easy shots to conquer. It requires an understanding of the proper fundamentals and technique of stroke production, as well as the devotion to practice it in drills. We must also have the patience to understand that we will most likely be unsuccessful in our first attempts of executing this in actual match play.

The risk involved in this strategy is that if I pop the ball up, where my opponent can reach it without stepping into the kitchen, the point is over! When this occurs, the initial response from most players is, “Well, I’m not going to try that again!”

But as with all great accomplishments in life, we must live with some failure before we succeed! In order to successfully accomplish the third ball opportunity we need to have what I refer to as “soft hands.” Let’s also consider that we are required to have these “soft hands,” just after hitting a full swing from our serve or groundstroke. This means we have to make a transition from a strong shot to a gentle shot.

Remember, we are attempting to put the ball in the kitchen, not trying to hit a passing shot through the player at the net, as we would in tennis.

While the strategy of this shot is the same as a drop shot in tennis, the fundamentals are different. To execute a good drop shot in tennis, you need to have a lot of racquet head speed through the shot, because you are attempting to put an extreme amount of underpin on the ball.

Executing a good drop shot into the kitchen in pickleball is different. Because of the restrictions on the design of paddles by the USAPA, you are limited to the amount of spin you can put on a pickleball. However, while a skilled pickleball player can impart under spin on the ball, it simply cannot be accomplished in a degree as it can with a tennis racquet.

This gets us back to having “soft hands.” To properly execute this shot, while keeping a firm grip on the paddle, a player needs to relax the wrist and forearm. This allows us to have a softer feel of the ball on the paddle. It is different than a drop shot in tennis, there is not a lot of paddle head speed or follow through.

Once we have successfully hit this shot, it is vital the we follow it in, up to the seven foot/no volley/kitchen line, because, once again, the reason we are doing all of this strategy is that we will hopefully force our opponents to pop the ball up. Then, as I said before, either ourselves or our partner will have the opportunity for the spike put away shot…Yes! That felt good! High five!

Practicing and mastering this third shot strategy will improve your overall game because you will be able have control of the speed and pace of the ball. Successful high level pickleball players must be able to reliably and confidently execute both soft and hard shots. Much like tennis played at higher levels, pickleball is a game of placement and strategic utilization of our opponent’s space and court to create opportunities to employ opportunities for us to put the ball away.