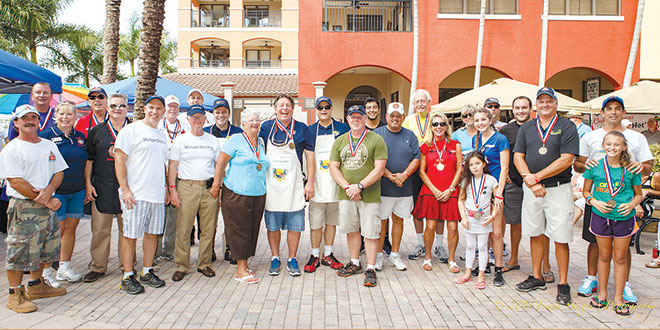 On October 10, the Marco Island Fire Rescue Foundation (MIFRF) held their Third Annual Jerry Adams Chili Cook-Off, hosted by CJ’s on the Bay. The event raises money for the foundation, whose mission it is to support firefighters who are in financial, medical, or personal need, and to offer scholarships

to firefighters and their children.

The title of the event, and the chili theme, is in honor of Jerry Adams, a Marco Island firefighter, who in 2012 lost his battle to cancer. Jerry was known for his famous firehouse chili. A chili so popular and tasty, it quickly became a favorite for not only the firefighters on duty, but for the

staff as well. The event is important in that it keeps Jerry’s memory alive. The chili is homage to his great cooking, and the money raised in his memory is a tribute to his character.

This year there were 10 different chili-tasting stations. Each chili was as unique and delicious as the next, 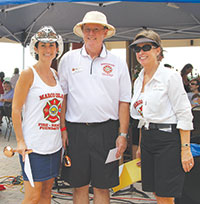 making the competition fierce. But only a few could win the coveted engraved chili ladle. Participants casted their votes, and in the end, Stonewalls won for best restaurant, the Marco Island Fire Department won for best municipality/civic group and the Marco Island Group at Morgan Stanley won for best business. Congratulations winners! And to those who didn’t win, better luck

next year, your chili was great!

What is perhaps more impressive than the copious amounts of chili consumed, is the outpour of support Marco Island residents continue to give. It seems that our community spirit is strong and our willingness to help unmatched. A prime example, Mike Stapleton won the 50/50 raffle, which

The chili cook-off is an important event because of

this. It brings us together for an important cause, helps us remember a fallen firefighter, and allows us to binge eat chili, guilt free.