Thinking ahead: Developing an EcoConscience 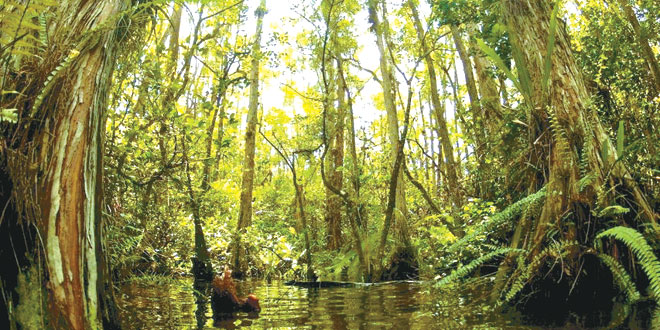 “In every deliberation, we must consider the impact on the seventh generation… even if it requires having skin as thick as the bark of a pine.” – “The Constitution of the Iroquois Nations: The Great Binding Law”

The Native American creed reminds us that everything that we do has consequences for something else. What we do today will have an effect as far into the future as seven generations. An idea long forgotten by the hustle and bustle of the modern world has once again begun to pick up speed as today’s society is ever more “green” in thinking.

On December 6, Rookery Bay hosted its second Lunch and Learn Lecture series of the season, featuring John Kiseda, Executive Director of the Florida Society for Ethical Ecotourism. While his lecture was titled, “Being an EcoTraveler in Southwest Florida,” Kiseda also spoke on the much bigger picture of being an ecologically minded member of society.

“Living in Southwest Florida, we all know we have so many wonderful resources here. Being 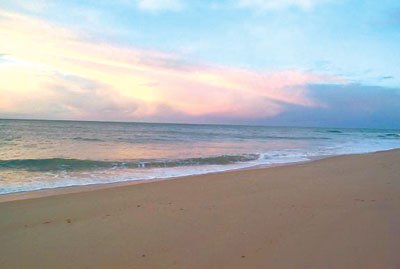 Without an eco-minded conscience, scenes such as this could be lost forever. PHOTOS BY JOSHUA ERICKSON

able to live in paradise, sometimes we need to stop and think about our responsibilities as human beings to make sure that paradise continues to stay that way,” stated Kiseda.

Referring to the “Seventh Generation” thinking, Kiseda discussed the disconnect between today’s society and nature. “Typically in our communities, we look at Society, Economy and Environment as three separate issues. When we break those apart, obviously there are some conflicts. If we want to do something to benefit the environment, we look at how it will effect our economy or our society and this causes that conflict. What I’m asking folks to think is that an Economy exists within a Society and both exist entirely within an Environment.”

Consider Southwest Florida. Our economy thrives on tourism. Tourists come here for the pristine beaches, the green sawgrass and the healthy mangrove systems – the environment. To ignore our environment for the sake of a better economy right now, would mean an eventual end to the natural beauty of the state of Florida. An eventual end 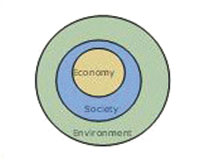 to the greatest natural asset we have when it comes to tourism.

As businesses begin to revert back to this way of thinking, eco-tourism has grown three times faster than the travel and tourism industry as a whole. Kiseda referred to this as “the awakening consumer” concept.

Many consumers want to go “green” but don’t quite know how. Kiseda described how “greenwashing” has effected our society by making it difficult to navigate between a true eco-friendly company and one that only labels itself as such.

This is where his non-profit comes into play. The Florida Society For Ethical Tourism (FloridaSEE) began 12 years ago in Southwest Florida and became a statewide organization two years ago. In an attempt to help the eco-consumer and the eco-business, FloridaSEE has adopted strict criterion for true eco-friendly companies. Companies that choose to align themselves with FloridaSEE will be asked to comply with at least 122 core requirements to become a certified FloridaSEE business. Another 114 bonus requirements may also be completed. The company then receives a “secret shopper” review. 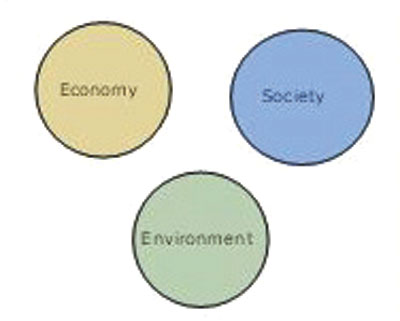 When society, economy and environment are viewed as separate parts of a community, the community’s problems are also viewed as isolated issues.

Only then does it receive certification.

Developing its ratings system based on those of eco-friendly countries such as Australia and Costa Rica, this is the first state-recognized certification system in the United States. With a patent pending, other states have already been looking to Kisera and FloridaSEE for guidance.

The one-year old program has certified six ecotour providers thus far, some right in our own backyard. All approved providers may be found on FloridaSEE’s website, www.FloridaSEE.com. Those who visit approved companies can rest assured that they are acting as an EcoTraveler.

As a part of the Lunch and Learn series, guests lunched on pasta and caesar salad provided by Carabba’s as they learned techniques on how to be a responsible traveler. Costco sponsored the event which takes place monthly.

The next Lunch and Learn will be held on January 2, from noon until 1:00 pm. Josh Manring, photographer will share “Captivated: Images of Our Wild Gulf Coast.” Admission is free to members of Rookery Bay and is $8 for nonmember. Pre-registration is required and can be done by calling (239) 417-6310 ext. 401.