Things Are Coming Up New at Porky’s 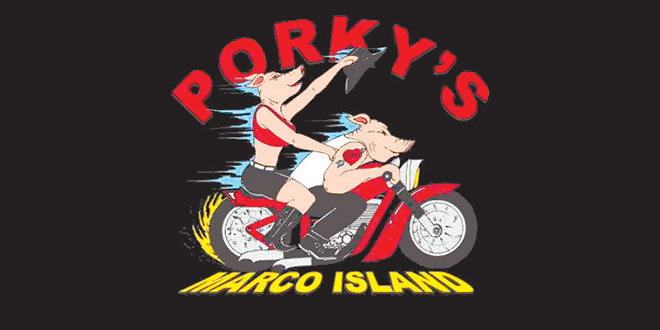 Porky’s has changed in some subtle and some not so subtle ways.

The words “Last Stand” were dropped from the name and replaced by “Restaurant and Lounge” back in 2013 when Bob and Linda Berkowitz of Marco purchased the business from Wayne and Brooke Carmignani, who opened Porky’s in 1998.

A more recent development is one that diners may have noticed on Porky’s menus and on their taste buds, as well. Those modifications are the handiwork of the restaurant’s new general manager, Michael McNaboe, and its new chef, Fernando Gonce.

McNaboe, a long-time Marco restaurateur, and Gonce, formerly of the restaurant Alto in Naples, have expanded and revitalized the restaurant’s offerings since coming on board four months ago. However, they have maintained the emphasis on smoked barbecue that has been a Porky’s 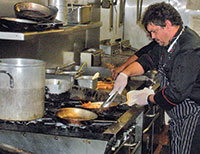 Porky’s had employed a kitchen manager and line cook system in the past. One of McNaboe’s first changes was to hire Gonce, who is joined by sous chef Jonathan Taylor.

“We decided we were staying with the barbecue theme, but we decided to bring in a professional chef who could incorporate new items, new recipes and incorporate sea food,” said McNaboe. “We’ve upgraded the style and recipes of the barbecue. It’s still smokehouse barbecue for everything from our ribs to our chicken.”

A Marco resident for 29 years, McNaboe has managed and owned a number of restaurants on the island, most recently the Front Street Italian Steakhouse, which closed in 2007.

Gonce has also worked as a chef at restaurants in Spain, France and Italy, after receiving his culinary training in Italy and in 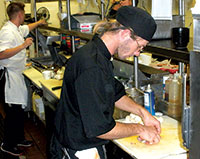 Cuba. Those disparate influences can be found in various ways in the dishes he prepares. “But more than changing recipes, I’ve tried to upgrade the quality of the food we serve here,” he added. “It’s changed a lot.”

The freshness of locally sourced fruits, vegetables, fish and seafood is a focus, with Porky’s now working with Gary Krist Produce and Paradise Seafood & Gourmet Market, both of Marco.

“Everything is made the old-fashioned way from scratch,” said McNaboe. “The herbs are crushed here. They don’t come in bags. I asked why they take the time to do it, and he (Gonce) said, ‘The quality of the food. You can taste the difference.’”

The “from scratch” emphasis even extends to the restaurant’s stocks and demi-glace, which Taylor prepares from left over bones rather than use 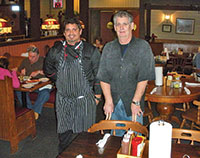 Porky’s entertainment is now being book by Naples-based 2b Productions, and the focus is on dishing up the oldies, oftentimes with the professional tribute acts that have proven popular on the island. “We still cater to the over-40 crowd,” said McNaboe. “These are entertainers who’ve been on Marco forever, and because of that, they have a great following.”

Regarding the future, McNaboe said they plan to continue upgrading the menu and experimenting with new items, such as muscles, crabs, oysters, local fish, veal and even gator ribs.

“We want to offer different things that can’t be found anywhere else so that if you want it, you’ve got to come here,” he said.