There’s Something in the Water 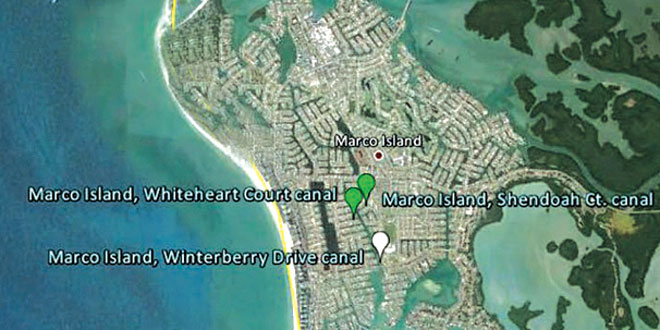 The white marker indicates a “Very Low” presence of red tide while the green markers indicate there is less that 1,000 cells per liter. The small amount indicates red tide is “Not Present.”

Marco Island’s waters and beaches have seen a recent invasion by a number of algae species. Some bad, the others just fine. Sightings and monitored reports by FWC have found red drift alga, graceful red weed, Alexandrium monilatum and red tide to be present along Marco’s coastline as well as within Marco’s canals.

Nancy Richie, Marco Island’s Environmental Specialist, along with her award-winning crew of volunteer beach stewards, have noted that both red drift and graceful redweed have washed up on Marco’s beaches.

Richie noted that often storms or passing fronts from the Gulf can wash red drift algae ashore if it is present within the tidal zone of Marco’s beaches. In a public email to her beach stewards, she stated, “This is an algae species that does not attach to sediment or other structures, but drifts on the surface or in the water column. Small invertebrates and fish find shelter and food in the mats of this species… It can multiply if conditions are right and wash up in high volumes.” She also noted that the volume seen on the beach at this time is very common and typical.

The graceful redweed seen along Marco’s shores is “not as common,” according to Richie. It is typically an algae that is found in calm lagoons 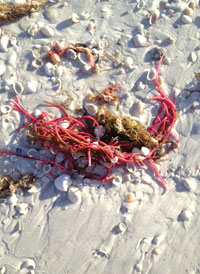 Caught on camera before it turned clear, the graceful red weed can wash ashore during storms.

and shallow waters. “It has forked branches like sinuous clumps of spaghetti and will quickly bleach to clear when on the beach,” she added. However, if seen before turning clear, the color of the algae is a beautiful bright red.

Neither of these species of algae are related to red tide, Karenia brevis, which is known to creep up on Marco Islanders, causing upper respiratory issues as well as dramatic events for local sea creatures.

In early 2013, red tide presence in the Gulf was incredibly high, causing a current death toll of 276 manatees to date. Luckily, a number of sick manatees were found on time and nursed back to health at places such as Tampa’s Lowery Zoo and SeaWorld. Once rehabilitated, the manatees were released near the destination where they were found.

Sea turtles also suffer from the effects of red tide, and large fish kills are also caused by the harmful alga.

According to Richie, red tide is “a micro alga, a single-celled, whip-tailed dinoflagellete, that when conditions are right, blooms (population explosion!), making the water discolored or “red” (typically brown or rust in color). This species is native and common in very low to low concentrations but in high concentrations.”

Currently, traces of red tide have been found within Marco’s waterways. According to Paula Scott, Research 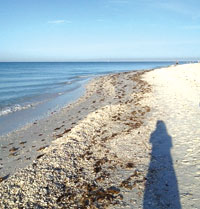 Associate with the Florida Fish and Wildlife Conservation Commission, a call came in on December 2, stating that rust colored water was present in the Whiteheart Canal. Scott took samples at the Whiteheart, Winterberry and Shenendoah Court canals.

“The results show Red Tide and Alexandrium monilatum present in the canals,” she reported through email.

Alexandrium monilatum can also cause fish kills, but according to FWC research, other toxic causes are unknown. The alga normally collects at the bottom of waterways and lies dormant until it blooms. Typical blooms last from July through October. “These blooms will probably persist in this area because they can hunker down when conditions aren’t just right and then bloom again later,” added Scott.

It is important to take note of our waterways and beaches in order to keep them, marine life and humans heal. Red tide is monitored regularly through FWC, however, it never hurts to give them a heads up. If you notice discolored water, dead fish on the beach or have upper respiratory irritation along the beach, you may report this to Nancy Richie at the City of Marco Island either by phone, 239-389-5003 or by email, nrichie@cityofmarcoisland.com.