There’s A New Sheriff in Town 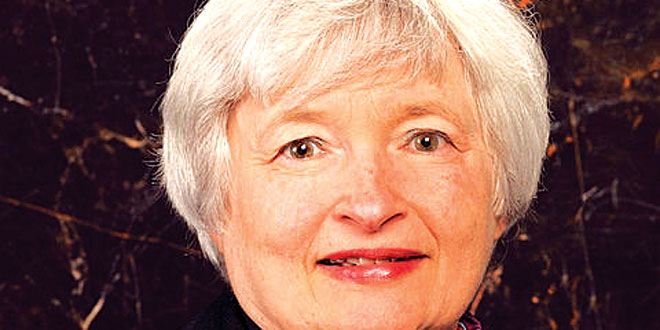 “Be always at war with your vices, at peace with your neighbors, and let each New Year find you a better man.” – Benjamin Franklin

Question: “With Janet Yellen as our new Federal Reserve Chairwoman, what can we expect?” – From Jennifer F. of Marco Island

Answer: As Janet Yellen takes control of the Fed, no one can predict how she’ll conduct herself. We can base opinions on what we do know about her as she replaces outgoing Fed Chairman Ben Bernanke, whose term expires on January 31, 2014, and discuss how policy may evolve.

First, Ms. Yellen has more experience than Bernanke did when he became chair. She served on the staff of the Federal Board of Governors in the 1970’s and was a member of the Fed Open Market Committee (FOMC) under Chairman Alan Greenspan during the 1990’s. Yellen became president of the Federal Reserve Bank of San Francisco in 2004 and since 2010 has served as vice chair of the Federal Reserve board. Based on her academic background, past actions and statements, it is reasonable to expect her fiscal policy to be very close to Bernanke’s.

As we slowly emerge from the most significant economic crisis since the Great Depression, continuity at The Fed is important. At times, the Fed chair can be the most influential person in the world based the success or failure of monetary policy. The economic and political significance of the Fed is enormous.

Mistakenly, some people think that The Federal Reserve is another branch of the government. Actually, The Fed is as about as “federal” as FedEx® shipping. Founded December 23, 1913, there have only been 14 chairmen during those one hundred years.

The Fed is a unique U.S. Central Banking System consisting of a Board of Governors, 12 regional Federal Reserve Banks across the country, numerous privately-owned U.S. member banks and advisory councils. The two primary functions of The Fed are 1) to regulate price stability and inflation and 2) to monitor employment levels, which are influenced by regulating interest rates and the supply of money.

To a large extent, the economic recovery depends on the actions of our new Fed Chairwoman because the legislative and executive branches of our government have not provided any meaningful fiscal-policy changes. Based on Ms. Yellen’s comments, we expect her to look for strong improvement in labor market trends before making meaningful adjustments to the money supply.

Yellen is likely to emphasize her views first, placing harmony and compromise in the background. This is in contrast to Ben “Helicopter” Bernanke who often spoke last at Fed meetings. Ben is known for being polite or deferential when he was actually holding off to 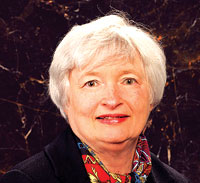 process opinions, presumably reaching a consensus and maintaining unity. Greenspan on the other hand dominated meetings and typically spoke first. Yellen’s style will likely be a blend of the two, asserting her opinion and tolerating dissent if leads to a better outcome.

Categorized as a “dove,” Yellen supports quantitative easing (QE: the Fed’s monthly $85 billion purchases of longer-term Treasuries and mortgage-backed securities). She accepts that the benefits outweigh potential costs, yet acknowledges that QE may promote excessive risk-taking behavior. Based on her public statements, a Fed under Yellen’s direction may start to taper asset purchases later and at a slower pace.

One of the Fed Chairwoman’s jobs is to set the federal funds rate, which is the interest rate Fed member banks charge each other when lending money overnight. Since Dec. 6, 2008, the Fed Funds rate has been between 0.00-0.25 percent and is likely to stay there until unemployment rates fall and remain at lower levels. Because of the financial crisis, Yellen believes that all of the Fed’s tools are necessary to restore the economy, but once back to “normal,” the Fed should return to a balance sheet consisting only of Treasuries (no mortgage-backed securities).

In her past role as FOMC subcommittee head of communications, Yellen initiated quarterly press conferences after the meetings to provide a transparent recap of content. “Fed Speak” will be a powerful way for her to influence markets with words. By alluding to her intentions and discussing expectations, she can accomplish a great deal.

Past actions show that Chairwoman Yellen relies less on calendar-based management and favors outcome-based guidance. It is expected that she will initially use “Fed Speak” to manage quantitative easing adjustments and influence the economy. We experienced the power of “Fed Speak” last spring after Bernanke merely mentioned that he was thinking of reducing QE, sending markets into a “taper tantrum.”

As with any new relationships, only time will tell how things will evolve. It remains to be seen whether Ms. Yellen can unwind the Fed’s balance sheet in an orderly manner, and provide fickle markets with what they want.

We wish you and your family a healthy, happy, and prosperous New Year! Stay focused and invest accordingly.

Opinions expressed herein are those of the author and subject to change at any time. Information obtained from outside sources is believed to be reliable.